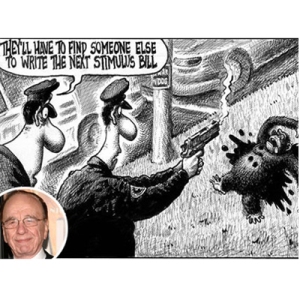 This time the apology from the New York Post’s controversial chimp cartoon is coming straight from the monkey’s uncle: Rupert Murdoch.

The News Corp. chairman offered up a personal mea culpa this morning for last week’s editorial panel that sparked allegations of racism by linking the killing of a chimpanzee in Connecticut to D.C.’s recently passed stimulus bill.

“Today I want to personally apologize to any reader who felt offended, and even insulted,” Murdoch said in a statement. “I can assure you, without a doubt, that the only intent of that cartoon was to mock a badly written piece of legislation.

“It was not meant to be racist, but unfortunately, it was interpreted by many as such. We all hold the readers of the New York Post in high regard, and I promise you that we will seek to be more attuned to the sensitivities of our community.”

Now it remains to be seen if his critics will accept his remarks. Last week, R&B star John Legend called for a boycot of the newspaper after the Post’s editors made a half-hearted apology he said lacked any genuine contrition.