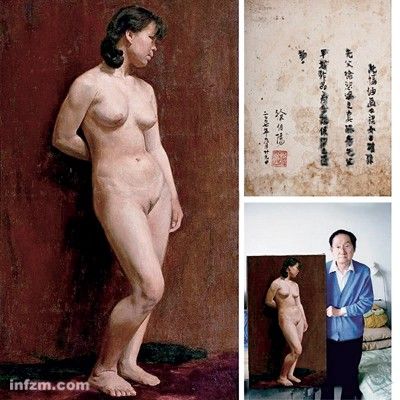 Put up to auction by Beijing Jiuge Auctions last year, a portrait by the famous artist Xu Beihong of his wife, Jiang Biwei, sold for $11.4 million. The young girl in the painting stands naked against a burgundy backdrop, one leg bent, an elbow crooked behind her back. Her eyes downcast, she looks shy and uncomfortable. A note from his son, Xu Boyang, on the back of the painting attests that it was by his father, although the artist died in 1953.

But Wang Yanqing, a 66-year-old painter from Inner Mongolia, told another story.

“It’s totally laughable,” he said. “That picture doesn’t look anything like Xu Beihong’s wife.” He said the picture was one of several painted by art students in his class at the prestigious Central Academy of Fine Arts (CAFA) in 1983, 30 years after the artist’s death. The model was a peasant farmer. He was one of those students who painted her, and his memory is crystal clear.

“At that time, it was very difficult to find nude models, so we painted the same ones over and over, and it was boring,” he remembered. “Suddenly this new model came — a young girl from the south who’d never modelled before, and everyone was very excited. We all wanted to draw her, so almost 20 of us crowded into the same room. It was one of my most successful pictures. I still have it in my studio.”

Indeed, the subject in his painting is identical to the one that sold for $11 million, except for the angle. Four other classmates have produced pictures of the same girl, in the same pose, with the same backdrop. As Wang points out, it’s an impossible coincidence and he and his classmates later published an open letter to stop the forgery circulating on the open market.

This case is a common one in the field. Problems such as bribery, non-payment and the aforementioned consignment of fake goods can lead to problems at all stages of the auction process and are rife in China. Many industry insiders think auction laws need changing, but it remains to be seen how soon, or if at all, this will happen.