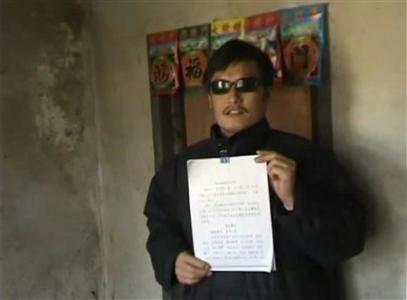 Blind legal activist Chen Guangcheng, one of China’s most prominent human rights advocates, has escaped from home imprisonment, activists said on Friday, but uncertainty over his whereabouts and fears about his health have worried supporters.

Chen, a self-schooled legal advocate who campaigned against forced abortions, had been restricted to his village home in Linyi in eastern Shandong province since September 2010 when he was released from jail.

His confinement and relentless surveillance with his family fanned protests by Chinese sympathizers and criticism from foreign governments and activist groups.

Chen’s reported escape and the furore it has unleashed could add to the headaches of China’s ruling Communist Party, which is striving to ensure stability and authority ahead of a leadership transition later this year.

Bob Fu, president of the Texas-based religious and political rights advocacy group ChinaAid, said in a statement that Chen was in Beijing and “100 percent safe”.

“There is speculation that Chen is in the U.S. Embassy in Beijing,” the group added. The U.S. Embassy and China’s Foreign Ministry both said they had no immediate comment.

In a video posted on YouTube, Chen confirmed he had escaped, and asked Premier Wen Jiabao to order an investigation in the maltreatment of him and his family by local officials.

“It was not at all easy, but I have escaped,” he said in the video. “Everything that was said on the Internet about the violence directed against me by Linyi, I’m here to say that it was all true.”

Chen did not say where he was nor what his plans were.

“I want Premier Wen to open a probe into this corrupt behaviour. The money paid by the people in taxes should not be wasted by corrupt local officials to hurt us,” he added.

While Reuters was not able to authenticate the video, there was scant doubt it was Chen, wearing his trademark dark glasses and speaking in his halting, Shandong-accented Mandarin Chinese.

Fu earlier said in a telephone interview that Chen’s wife, daughter and mother were still at the family’s village home, which was surrounded by authorities after they discovered Chen had disappeared.

“The entire village and government leaders were stunned by the developments when Chen Guangcheng was not found. So they are surrounding his home,” he said.

Another activist, He Peirong, told Reuters that Chen had talked with her.

“His spirits are okay, but he is passing blood and is very weak,” she said. “His hands won’t stop shaking.”

She said Chen was worried about his family.

Chen’s fate has become a test of wills, pitting a crackdown on dissent against rights activists who have rallied around his cause and that of artist Ai Weiwei.

Officials in Shandong did not comment immediately on Chen’s escape.

The news was widely discussed on China’s popular Twitter-like service Weibo, with users referring to him as “the blind man” to avoid censorship of his name, reflecting his status as a Chinese cult hero.

“He has escaped from the clutches of the devil,” wrote “Brave to speak”.

“Never has the fate of single blind man moved the hearts of an entire nation,” added “Jing Huili”.

“If Chen has successfully escaped, it comes not a moment too soon as there have been reports that Chen has been in extremely poor health due to severe multiple beatings by his captors,” Kine said in an email.

Chen angered Shandong officials in 2005 by exposing a programme of forced abortions as part of China’s one-child policy. He was formally released in September 2010 after four years in jail on a charge of “blocking traffic”.

Last year, dozens of supporters were blocked from visiting Chen. Many of them were beaten by men in plain clothes.

In December, Hollywood actor and “Batman” star Christian Bale was roughed up by security guards while trying to visit Chen. Bale had been in China to promote a movie with Chinese director Zhang Yimou.

Guo Yushan, a Beijing-based researcher who has campaigned for Chen’s release, said he believed Chen remained free as of midday on Friday.

General Manager at Craig Hill Training Services * Get an Australian diploma by studying in your own country * Get an Australian diploma using your overseas study and work experience * Diplomas can be used for work or study in Australia and other countries. * For more information go to www.craighill.net
View all posts by Craig Hill »
« Off The Beaten Track Beijing: Episode 2 The Street Food Vendor
China gives the yuan more muscle »