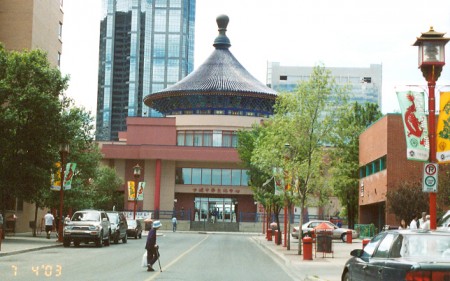 On the flight from San Francisco to Calgary, my American-Chinese seat neighbour was candid about the population density of Hong Kong and China. As we approached the runaway, the vast snow-covered open land prompted him to comment that we should import people from the two countries to lighten their weight.

He was in Calgary on a business trip, a complete demographic change from decades ago when his countrymen came looking for work in the Canadian railways and mining companies or as day labour. They are still arriving but now moving into affluent neighbourhoods and leaving their impressions in the technical, educational and financial institutions of present Canada.

Two weeks in Calgary and I could see the reason that, despite the foothill (Rockies) temperature of persistent, niggling cold, the city is attracting Asians. It is unflappable, freezing at times, and at the same time offering opportunities for entrepreneurs and workers in its fast growing oil industry and connected businesses. Fort Calgary documents the early settlers, the Chinese who came to this trading post in the 1880s. Th majority crossed over from British Columbia and other regions when their contracts laying tracts for Canadian Pacific Railways was over.

Once in Calgary, Alberta, they worked in laundromats, Chinese eateries, grocery stores, sundry jobs and as ranch hands, coal miners establishing their own Chinatowns to ward off loneliness and racism. In 1900 there were about 100 Chinese in Calgary but the numbers soon swelled with improved social and working conditions. The ‘prairie entrepreneur’ spirit caught on, and from traditional jobs they moved on as owners of businesses in a city with the stereotypical Hong Kong sky-scape of glass towers and housing blocks.

They seem satisfied, like the owner of a salon in a Chinatown mall who has been in Calgary for more than 20 years. She was excited to know that I was from Hong Kong, and whether I spoke Cantonese. I had to disappoint her. There are others with Canadian passports who have returned to Hong Kong because of the weather or better opportunities.

Walking along the banks of Bow River, close to China Town, I came across old couples, content, though probably wondering what they are doing far away from home.

Toronto/Ontario has the largest concentration of Chinese but also Asians from Taiwan, Korea, Japan and Hong Kong. In 1894, the Chinese population in Toronto numbered fifty and the present count is nearly half a million in the Greater Toronto Area. I did not visit the Chinese suburbs but met with another Asian group…the sub continental Asians of Brampton. The cause of exodus from Punjab was political or economic or both but in due time being in ‘Ca-ne-da’ (Punjabi pronunciation) was the ultimate a young Punjabi lad would aspire for. Immigration rules were favourable and once in they called their families, friends, relatives of relatives, unmindful of living in one apartment surrounded by familiar lifestyle.

Prosperity via hard work changed their livelihoods and single rooms gave way to apartments, row houses and mansions. Our host drove us around in what he called Singh-land once Sugarland inhabited by Caucasians. This area is now the stronghold Singh-land with mansions set in vast fields reminiscent of village life back home. The SUVs, Pickups and Mercedes parked in the driveway portray the general prosperity of the newly anointed truckers or construction company owners. It is interesting to note how areas are demarcated by their country affiliations and a handful soon grows into multitudes and then the gated community.

Vancouver has the second largest density of Chinese as compared with Toronto/Ontario. The first record of Chinese in British Columbia dates to 1788 when Chinese carpenters from Macao were brought to the country to work in the shipyards. The surge was in 1858 from the California gold fields as deserters from railroad and mining companies made their way to Gam San (“Gold Mountain”) or Canada (Fraser Canyon Gold rush). The deserters were looking for the elusive luck before returning to homeland but being indentured to Chinese contractors and mining company owners were denied exit facilities.

They crossed over to Alberta or stayed in British Columbia establishing their enclaves, (Chinatown of east Pender street, Downtown Vancouver) to help deal with segregation, non entry into high-end jobs and later separate schooling for their children. Chinese from other countries, South America, the Koreas, Taiwan joined them and the ‘enclave’ continued with its traditional status with vivid facades, parks, ceremonial gates, lanterns, mysterious alleys and opium dens reminiscent of architecture back home. The Sun Yat-Sen garden is a tourist landmark, a classical Chinese garden, peaceful and rejuvenating.

The biggest modern influx was in the 1990s, a follow through of Hong Kong’s handover to China in 1997. Vancouver opened its shores to wealthy and educated Chinese from Hong Kong and later from Mainland China constructing the ‘Glass towers or ‘See- through Towers’ some are still vacant, replacing the staid Victorian houses in Downtown and suburbs, and the farmlands of Richmond into rowed Chinese housing.

Hong Kongers were attracted to Vancouver, picturesque setting amongst mountains, sea and a salubrious climate, instead of US cities. The high scale Chinese presence in the arts and music scene, politics, writers and media, entrepreneurs, scientists, medicine, educators and real estate impacted property markets with presence of ‘monster mansions’ in Shaughnessy and Kerrisdale, once Anglo strongholds, high-rise boom in Downtown, Yaletown/False Creek and Coal Harbor.

The University of British Columbia is referred to as the ‘University of Billion Chinese’ for having upped the level in numbers and grades. I had an interesting conversation with a Chinese mother planning on visiting her son in Hong Kong. She was curious to know what language I spoke at home. She assumed that staying in her country I must be married to a Chinese. Well, I informed her that I was an Indian married to an Indian and spoke ‘Hindi’ at home. With increasing mixed marriages in Canadian cities I gave her benefit of doubt.

To an outsider Vancouver, Burnaby, Richmond, Surrey, Victoria Island appear as extensions of any Asian city with South East Asians, Subcontinent Asians, Middle East Asians and Asians from other countries lugging their ethnicities from their hometowns.

Travel writer/blogger, reporter, researcher, feature and content writer looking for the unusual and quirky. TRAVTRAILS is a presentation of places visited and spiced with photographs taken by me. In my travel writings I have learnt to be a presenter and not a preacher. The role reverses when I see blatant misuse of natural resources, unrestricted access to tourist spots and national monuments and indifference to surroundings.... Travel is knowledge with enjoyment and learning and as long as I can I will.
View all posts by travtrails »
« Chinese Goverment denies army at ‘combat readiness’
Chinese Companies Becoming “Foreign” Brand Names »