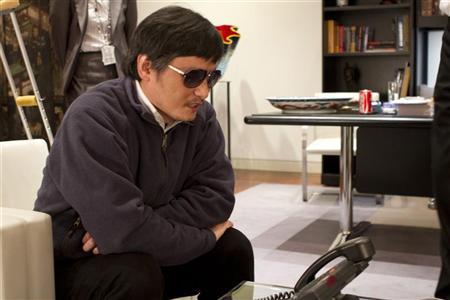 China may have sown the seeds of its next human rights row with the United States even as it looks to end the current one over blind dissident Chen Guangcheng, with its treatment of him inspiring a band of lawyers to join his human-rights battle.

The tough line over Chen, whose plea for U.S. protection sparked a diplomatic crisis with Washington, has encouraged Chinese lawyers and advocates to challenge what they see as the ruling Communist Party’s stifling of lawful dissent.

Embarrassed by Chen’s escape from house arrest and dash to the U.S. embassy in Beijing last month, the government is expected to allow Chen and his family to travel to the United States as a way of easing Sino-U.S. tensions on human rights.

Lawyers from around the country have already come forward to provide his extended family with the kind of advocacy Chen, a self-taught legal activist, became famous for – taking on politically sensitive cases against all odds.

More than a dozen lawyers have offered to represent his nephew, detained in the immediate aftermath of the discovery of Chen’s escape from his heavily guarded home in Shandong province, northeast China.

“Sooner or later, if you don’t want to be a slave here (to authorities), you’d have to make some plans for jail,” said Liu Weiguo, a leading member of the legal team that risks the wrath of party officials by acting for Chen’s nephew, Chen Kegui.

“I’m not willing to go to jail but I’m even more reluctant to be their slave.”

Chen Kegui, aged in his early 30s, could face the death penalty after he allegedly used knives to fend off local officials who burst into his home on April 27, the day after they discovered his blind uncle had evaded a security dragnet.

Liu Weiguo said he doubted his new client would get a fair trial, but his decision to take the case anyway is consistent with the approach of China’s weiquan (rights defence) movement, of which Chen Guangcheng was a prominent campaigner.

The movement, led by lawyers and academics, has sought to use existing laws to expose corruption, illegal land grabs, environmental abuses and other injustices. Already weakened by detentions and jailings over the years, it was effectively killed off 12 months ago in a crackdown on dissent that appeared intended to show the party could not be challenged.

But Chen Guangcheng’s case has exposed kinks in the party’s armour just months before a leadership succession and his appeal for U.S. protection has also ensured Washington takes a keen interest, not only in Chen but the plight of his relatives.

“If we are talking entirely about the law, then we are very confident,” Liu Weiguo said of defending Chen Kegui, who the local Yinan public security bureau says is charged with “intentional homicide” despite not killing anyone.

“But what we’re facing now is not a legal issue. Because of our experiences, we know that trials that are held not in accordance with the law are very common.”

The weiquan movement is awkward for authorities because it calls for laws to be respected or reformed, not subverted, and uses the Internet rather than underground political parties or street protests.

“This change doesn’t come automatically, it has to be fought for, and people like Chen are brave enough to fight for it,” Sarah Schafer, a researcher for Amnesty International, said. “They are using the tools that the Chinese Communist Party has said they are allowed to use, which is the tool of law.”

She changed cars several times before meeting Liu Weiguo, afraid of being caught and detained herself, Liu Weiguo said.

“I hope all those who care about us will help us find my husband, give him a fair answer and make sure those lawbreakers who have illegally entered our home are severely punished,” Liu said, wiping away her tears, in a video message obtained by Reuters on Monday.

“Where my husband is now, I don’t even know.”

Reuters could not reach the Chen family’s village of Dongshigu in an attempt this month to speak to his relatives. Guards prevented reporters from even entering the village.

Calls to the government of Linyi, the city in Shandong where Chen Kegui is being held, went unanswered on Wednesday.

Communist Party officials are especially wary of lawyers. Those who have taken on sensitive issues in the past have been intimidated, beaten, detained or lost their licenses.

Chen Guangcheng, 40, who taught himself the law, came to national fame by campaigning for farmers and disabled citizens, and exposing forced abortions. He was jailed for a little over four years from 2006 on what he and his supporters contend were trumped-up charges designed to end his rights advocacy.

He had accused Shandong officials in 2005 of forcing women to have late-term abortions and sterilisations to comply with China’s strict family-planning policies. Authorities finally moved against him with charges of whipping up a crowd that disrupted traffic and damaged property.

After his release from prison in 2010, Chen spent 19 months under house arrest before he escaped and, with the help of supporters, reached the U.S. embassy where he sheltered for six days. He is now in a Beijing hospital, being treated for an intestinal illness and a broken foot, awaiting permission to fly with his wife and two small children to the United States.

Chen has accused authorities of harassing and detaining relatives back in Shandong province, describing the arrest and charging of his nephew as “revenge gone wild”.

“The methods they used against me in 2006 … are again being used against Chen Kegui,” the dissident, speaking by phone from his hospital room, told a U.S. House of Representatives committee on human rights on Tuesday.

A WINDOW FOR ACTIVISM

Pu Zhiqiang, a prominent rights lawyer, said he believed increasing grievances could strengthen the weiquan movement and lead Beijing to rethink its use of legal repression.

“I don’t think Wen Jiabao and Zhou Yangkang’s tactics can last,” he said, referring to the Chinese Premier and the security tsar, both of whom are due to step down in March.

“The ordinary Chinese people need a country that is ruled by law, and not some unprincipled ‘harmonious society’,” Pu added.

Nicholas Bequelin, a researcher at Human Rights Watch, said publicity over the dissident’s case, including the plight of his relatives, gave legal activists a degree of protection.

However, authorities have already thwarted plans by lawyers, Chen Wuquan and Liu Weiguo, to meet Chen Kegui and warned many others not to get involved, said Liu Weiguo.

Guangzhou-based lawyer, Chen Wuquan, had been assigned to meet Chen Kegui but said his license was confiscated.

Liu Weiguo said that within hours of meeting Liu Fang he had enlisted five lawyers to join a Chen Kegui legal team. Within two weeks, seven more had joined. Four lawyers in the team said that state security officers, local officials or justice ministry officials had called them to warn them off the case.

Liu Weiguo said state security officials had told him last week they would “pay a visit” to his elderly mother.

Liu Fang also last week enlisted Beijing’s Ding Xikui who represented jailed Nobel Laureate Liu Xiaobo at his 2009 subversion trial. Ding, a member of lawyer Mo Shaoping’s firm, said on Tuesday he was in Linyi with another lawyer, Si Weijiang, waiting for authorities to respond to a request to meet Chen Kegui at the Yinan County Detention Centre.

Mo said that his firm had not been threatened for taking on the case.

“DOES CHINA STILL HAVE LAW?”

Chen Kegui’s mother, Ren Zongju, may also be indicted for “harbouring” him, a charge punishable by up to 10 years jail, said Liu Weiguo. She was detained on April 29 and freed on bail.

Liu Fang has left Shandong for fear of reprisals, the lawyer said, adding that he had no way of contacting her now.

In the video, Chen Kegui’s wife said she had no idea of her father-in-law’s whereabouts. Chen Fubin, her five-year-old son, is in Shandong.

Chen Kegui, a small business owner, spoke with U.S.-based writer Yaxue Cao before his detention and recounted the raid on his home by officials looking for his blind uncle.

“I was defending myself; I didn’t go out to kill anyone. It was they who broke into my home and raised havoc,” a sobbing Chen Kegui said in an audio recording posted on the Internet. “I hope lawyers will defend me out of reason and justice.”

“I want to ask: does China still have law? In China, law is trampled over at will. I love my motherland, but this is what she gives me.”