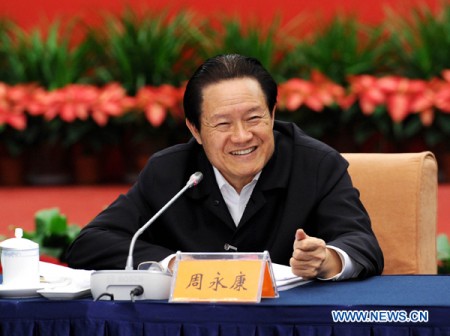 According to Hong Kong’s Singtao Daily and SCMP and China’s Xinjiang Daily, in Xinjiang’s election of 42 Xinjiang delegates to the 18th Congress of the Chinese Communist Party (CCP), CCP Politburo Standing Committee member Zhou Yongkang was elected a delegate. Previously, there were various kinds of rumours on Zhou falling into disgrace as he was regarded as Bo Xilai’s close ally.

A British newspaper even reported on May 14 that Zhou had been deprived of his power, remained in his post as security tsar merely in name, and confessed his errors before other top leaders.

Domestically, the rumours seemed to have great credibility among common people. On May 4, 16 senile CCP members wrote an open letter to CCP central authority demanding the removal of Zhou from his office and disqualification of Zhou as a delegate to the coming 18th CCP Congress. The letter was published by the news website http://www.canyu.org on May 9.

However, in its efforts to dispel all those domestic and foreign rumors, full text of Zhou’s speech was published in the CCP mouthpiece People’s Daily. On May 17 a 4.5-minute footage of Zhou’s inspection tour in Xinjiang was aired in China’s official TV prime news. In the morning of May 18, the top leaders, Hu Jintao, Wen Jiabao and Xi Jinping even personally attended a meeting and listen to Zhou’s long speech.

However later the same day, Zhou was found missing in the list of Hebei delegates to 18th CCP Congress. There was renewed speculation that Zhou has fallen out of favor and is not allowed to attend the important Congress because Zhou attended the 17th CCP Congress as a Hebei delegate.

To dispel such speculation, Xinjiang Daily says in its report on May 17 that on May 16, Xinjiang Autonomous Region elected 42 Xinjiang delegates to the 18th CCP Congress. Zhou Yongkang, the candidate nominated by the Central authority, was unanimously elected and his election was “hailed with prolonged applause by all the participants of the election”.

The CCP central leadership is such an impenetrable black box that people have to rely on imagination and speculation in their efforts to report its operation.

However, do not be frustrated by repeated errors in your speculation. As described in the well-known Chinese saying on Chinese palace coups, “Sound of ax and shadows of people in candle light, eternal mystery.” Some of the events that happen in the black box may remain eternal mystery.

Author of the book "Tiananmen's Tremendous Achievements" about how with the help of Tiananmen Protests, talented scholars with moral integrity seized power in the Party and state and brought prosperity to China. The second edition of the book will be published within a few days to mark the 25th anniversary of Tiananmen Protests All the parts in the first edition remain in the second edition with a few changes due to information available later and better understanding. There are also some changes for improvements of style. The new parts are Chapters 12-19 on events in China after the first edition was published: The fierce power struggle for succession between reformists and conservatives; Xi Jinping winning all elders’ support during his mysterious disappearance for 2 weeks in early September, 2012; and Xi Jinping Cyclone. Chan Kai Yee's new book: SPACE ERA STRATEGY: The Way China Beats The US An eye-opening book that tells the truth how the US is losing to China. The US is losing as it adopts the outdated strategy of Air-Sea Battle while China adopts the space era strategy to pursue integrated space and air capabilities: It is losing due to its diplomacy that has given rise to Russian-Chinese alliance. US outdated strategy has enabled China to catch up and surpass the US in key weapons: Hypersonic weapons (HGV) that Pentagon regards as the weapon that will dominate the world in the future. Aerospaceplane in China’s development of space-air bomber that can engage enemy anywhere in the world within an hour and destroy an entire aircraft carrier battle group within minutes. Anti-satellite (ASAT) weapons, anti-ASAT weapons, stealth aircrafts, drones, AEW&C, etc. The book gives detailed descriptions of China’s weapon development based on information mainly from Chinese sources that the author monitors closely. U.S. Must Not Be Beaten by China! China is not a democracy. Its political system cannot prevent the emergence of a despotic leader or stop such a leader when he begins to bring disasters to people. A few decades ago, Mao Zedong, the worst tyrant in world history did emerge and bring disasters to Chinese people. He wanted to fight a nuclear war to replace capitalism with communism but could not bring nuclear holocaust to world people as China was too weak and poor at that time. If a despot like Mao Zedong emerges when China has surpassed the US in military strength, world people will suffer the misery experienced by Chinese people in Mao era. China surpassing the US in GDP is not something to worry about as China has the heavy burden to satisfy its huge population, but China surpassing the US in military strength will be world people’s greatest concern if China remains an autocracy. US people are of much better quality than Chinese people. What they lack is a wise leader to adopt the correct strategy and diplomacy and the creative ways to use its resources in developing its military capabilities. I hope that with the emergence of a great leader, the US can put an end to its decline and remain number one in the world. China, US, space era strategy, air-sea battle, space-air bomber, arms race, weapon development, chan kai yee
View all posts by chankaiyee2 »
« Chen Guangcheng arrived at New York
China clears Google, Motorola merger: Deal to close ‘within days’ »

One thought on “Zhou Yongkang elected a congress delegate”