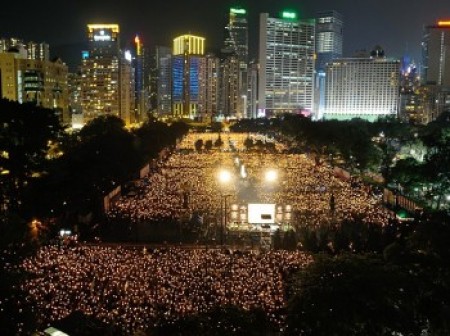 Hong Kong media Ming Pao and SCMP report that 180,000 people attended the candle light vigil in Hong Kong’s Victoria Park, to commemorate those killed in the 1989 Tiananmen Massacre. However police put the number at just 85,000.

According to SCMP’s description, waving candles and singing, the crowd spread across six soccer pitches and the nearby grass field. They chanted: “Release pro-democracy activists, build a democratic China, vindicate the June 4 movement, and end one-party dictatorship.”

Lee Cheuk-yan, chairman of the Hong Kong Alliance in Support of Patriotic Democratic Movements in China which organised the vigil, guesses that the sharp increase in participants this year is due to the increase in young and Chinese mainland participants. Perhaps this has something to do with the June 4 museum and democracy activist Fang Zheng’s participation in person.

Due to the large number of citizens who flooded the Victoria Park from 4:00 pm, the organiser had to postpone the vigil by 20 minutes.

Tong, a year 2 pupil who came with his father as soon as school was over to get a place in front of the platform, jumped with joy when he said that he had just donated HK$2,000 (US$250) to the Alliance. “I would have donated HK$10,000 (US$1,250) or HK$200 million (US$25 million) if I had the money, as I attach great importance to this event,” says Tong. According to him, when he was back in school after the vigil last year, he told half of his classmates about the Massacre. They were all amazed and said, “It was really bad, the killing. We wanted them to apologise.” Tong’s father said that he was astonished by the education Tong received in school. The new government is washing his brain so that he has to counter the brainwash by telling his son the truth.

There were a particularly large number of youngsters in the Park this year, including groups of college students who conducted their mourning in creative ways. Some secondary school pupils remained in school uniforms as they did not have time to change. Lin, 18, a secondary school pupil, said that though he had not personally watched footages of June 4 on TV screen, he was persistent in his views regarding that event. “Some of the old generation who have experienced it may perhaps be indifferent now, and do not have such a strong demand for democracy. I have taken it over from them and I will come as long as it is not vindicated!”

There was no shortage of those who had come to the Park every time for the past 23 years. Their persistence had not been faded by time. Uncle Lin, who was released from hospital that very morning, came to join the vigil. He insisted on coming along with his wife though he could not sit down due to the wound left by the operation. He was filled with tears when he talked about June 4. “They were all my sons (referring to Beijing students)! They are all good youngsters. There is nothing more grievous than this incident.”

Mr. Hu, who has also come every time over the past 23 years, said, “The atmosphere on the road leading to the entrance is quite different this year. There are obviously many more young people. I believe what the Alliance says about succession generation after generation has really come true this year.”

Fang Zheng, whose legs were crushed under a tank in Tiananmen Square, came to the Park for the first time yesterday, and took lead in shouting the slogan “Vindicate June 4”. He was so agitated that he could not speak for a long time. Encouraged repeatedly by the participants, he finally said, “This persistence has been kept on for 23 years. I know it is a sea filled with love and conscience. I am stunned when I see the candle lights. Whatever I say does not count. Your coming here has given full explanation: You have not forgotten!”

Besides Fang Zheng, the audio and video records of Guo Liying, representative of the Tiananmen Mothers activist group, and Wang Dan, former student movement leader, were played during the vigil.

Author of the book "Tiananmen's Tremendous Achievements" about how with the help of Tiananmen Protests, talented scholars with moral integrity seized power in the Party and state and brought prosperity to China. The second edition of the book will be published within a few days to mark the 25th anniversary of Tiananmen Protests All the parts in the first edition remain in the second edition with a few changes due to information available later and better understanding. There are also some changes for improvements of style. The new parts are Chapters 12-19 on events in China after the first edition was published: The fierce power struggle for succession between reformists and conservatives; Xi Jinping winning all elders’ support during his mysterious disappearance for 2 weeks in early September, 2012; and Xi Jinping Cyclone. Chan Kai Yee's new book: SPACE ERA STRATEGY: The Way China Beats The US An eye-opening book that tells the truth how the US is losing to China. The US is losing as it adopts the outdated strategy of Air-Sea Battle while China adopts the space era strategy to pursue integrated space and air capabilities: It is losing due to its diplomacy that has given rise to Russian-Chinese alliance. US outdated strategy has enabled China to catch up and surpass the US in key weapons: Hypersonic weapons (HGV) that Pentagon regards as the weapon that will dominate the world in the future. Aerospaceplane in China’s development of space-air bomber that can engage enemy anywhere in the world within an hour and destroy an entire aircraft carrier battle group within minutes. Anti-satellite (ASAT) weapons, anti-ASAT weapons, stealth aircrafts, drones, AEW&C, etc. The book gives detailed descriptions of China’s weapon development based on information mainly from Chinese sources that the author monitors closely. U.S. Must Not Be Beaten by China! China is not a democracy. Its political system cannot prevent the emergence of a despotic leader or stop such a leader when he begins to bring disasters to people. A few decades ago, Mao Zedong, the worst tyrant in world history did emerge and bring disasters to Chinese people. He wanted to fight a nuclear war to replace capitalism with communism but could not bring nuclear holocaust to world people as China was too weak and poor at that time. If a despot like Mao Zedong emerges when China has surpassed the US in military strength, world people will suffer the misery experienced by Chinese people in Mao era. China surpassing the US in GDP is not something to worry about as China has the heavy burden to satisfy its huge population, but China surpassing the US in military strength will be world people’s greatest concern if China remains an autocracy. US people are of much better quality than Chinese people. What they lack is a wise leader to adopt the correct strategy and diplomacy and the creative ways to use its resources in developing its military capabilities. I hope that with the emergence of a great leader, the US can put an end to its decline and remain number one in the world. China, US, space era strategy, air-sea battle, space-air bomber, arms race, weapon development, chan kai yee
View all posts by chankaiyee2 »
« China tells US to stop reporting pollution
China’s counter attack will be horrible, says Chinese military leader »