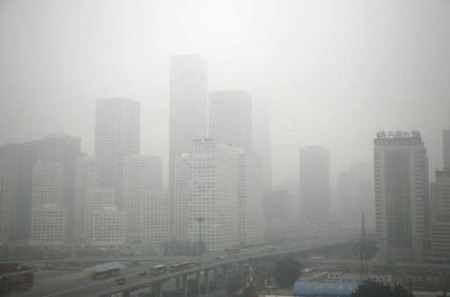 A senior Chinese official demanded on Tuesday that foreign embassies stop issuing air pollution readings, saying it was against the law and diplomatic conventions, in pointed criticism of a closely watched US embassy index.

The level of air pollution in China’s heaving capital varies, depending on the wind, but a cocktail of smokestack emissions, vehicle exhaust, dust and aerosols often blankets the city in a pungent, beige shroud for days on end.

Many residents dismiss the common official readings of “slight” pollution in Beijing as grossly under-stated.

The US embassy has installed a monitoring point on its roof which releases hourly air-quality data via a widely followed Twitter feed. The US consulate in Shanghai provides a similar service.

While China tightened air pollution monitoring standards in January, the official reading and the US embassy reading can often be far apart.

Chinese experts have criticised the single US embassy monitoring point as “unscientific”.

Deputy Environment Minister Wu Xiaoqing went a step further, saying such readings were illegal and should stop, though he did not directly name the United States.

“According to the Vienna Convention on Diplomatic Relations … foreign diplomats are required to respect and follow local laws and cannot interfere in internal affairs,” Wu told a news conference.

“China’s air quality monitoring and information release involve the public interest and are up to the government. Foreign consulates in China taking it on themselves to monitor air quality and release the information online not only goes against the spirit of the Vienna Convention … it also contravenes relevant environmental protection rules.”

The US embassy acknowledges that its equipment cannot be relied upon for general monitoring, saying “citywide analysis cannot be done … on data from a lone machine”.

Embassy officials were not immediately available for comment on Wu’s criticism.

Wu said China’s air quality standards were drawn up in consultation with the World Health Organisation and “accorded with the present situation in our country”.

Despite his criticism, Wu acknowledged that China’s air quality and overall environmental situation remained precarious, with more than one tenth of monitored rivers rated severely polluted, for example.

Wu said the government was studying a long-mooted environment tax on polluting industries, though he did not give a timetable for when it might come into effect nor give details of how the tax might work.

“We need to make sure that certain companies are fulfilling their environmental obligations,” he added. The tax “will ensure companies bear a corresponding cost for the damage and pollution their emissions cause”.

General Manager at Craig Hill Training Services * Get an Australian diploma by studying in your own country * Get an Australian diploma using your overseas study and work experience * Diplomas can be used for work or study in Australia and other countries. * For more information go to www.craighill.net
View all posts by Craig Hill »
« China struggles as illegal foreigners increase
180,000 mourners in Hong Kong for June 4 remembrance, a new record »

6 thoughts on “China tells US to stop reporting pollution”