Aquino calls back boats from the Huangyan Island 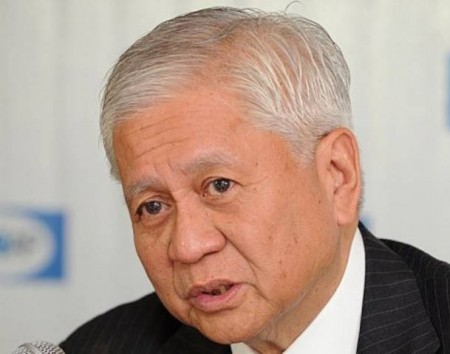 The Philippine Department of Foreign Affairs announced on June 16 that President Aquino had ordered all Philippine ships to withdraw from the Huangyan Island sea area.

Philippine Secretary of Foreign Affairs Albert Ferreros del Rosario said on that day that due to the increasingly worse weather, President Aquino issued an order on June 15 to call two Philippine boats back to port from Huangyan Island sea area.

On April 10, 12 Chinese fishing boats were disturbed by a Philippine warship when they were carrying out their operation in the lagoon within China’s Huangyan Island. The Philippine warship attempted to detain the Chinese fishermen blocked in the lagoon but it was hindered by two Chinese marine surveillance boats. That gave rise to a standoff between the two countries’ ships and boats.

Though the Philippine government withdrew its warship later, it replaced the warship with a coast guard boat and a boat from the bureau of fishery and aquatic product resources at Huangyan Island sea area. The Philippine Meteorological Bureau issued a forecast earlier that Typhoon Guchol and southwestern monsoon would bring serious wave and storm to that area. Del Rosario says that when weather conditions have improved, the Philippine government will make a “reassessment.”

Philippine President Aquino said earlier that Sino-Philippine relations are win-win mutual beneficial relations and the cooperation should be carried on and intensified. At present, the two countries are striving to peacefully handle the Huangyan Island incident through diplomacy.

Philippine and international laws have clearly determined Philippine territories and sea area. China and the Philippines should respect each other’s sovereignty. Regarding that, Liu Weimin, spokesman of the Chinese Ministry of Foreign Affairs, responded by saying that the Chinese side has noticed President Aquino’s attitude in attaching importance to Sino-Philippine relations. China attaches similar importance to developing Sino-Philippine relations and hopes that China and the Philippines will make joint efforts to promote healthy and stable development of the relations between the two countries.

Liu Weimin says, regarding the Huangyan Island incident, China has time and again expressed its position. At present, Chinese fishing boats are carrying out normal production operations in China’s Huangyan Island sea area and China’s public services ships keep on providing administration and services for Chinese fishing boats and fishermen. The situation as a whole tends to be easing.

China hopes that the Philippine side will not adopt any actions to make matters complicated and deteriorating, and will work along with China for the same purpose – to satisfactorily handle relevant issues through diplomacy. At the same time, he stressed that according to Philippine law, the Philippines has time and again officially acknowledged that the Huangyan Island does not lie within Philippine territories. “United Nations Convention on the Law of the Sea” is not the rule of international law for determination of territorial ownership. Therefore, undoubtedly China has sovereignty over Huangyan Island.

Earlier, Ma Keqing, Chinese ambassador to the Philippines, also stressed that China and the Philippines should face squarely their South China Sea disputes, when he attended activities of Philippine Chinese communities. China has all along strived to resolve relevant disputes through diplomacy. Ma believes that the South China Sea disputes can be satisfactorily resolved as long as both countries proceed from the overall interests of their relations on the basis of their sincere and good desire.

As for the problem at present, both countries should maintain the easing trend of the situation, and persist in carrying out diplomatic dialogue. China believes that as long as the two countries use their political wisdom and work for the same goal, they will certainly be able to overcome the difficulties, recover the friendly feelings between the peoples of the two countries and obtain steady development of Sino-Philippine friendly cooperation.

Author of the book "Tiananmen's Tremendous Achievements" about how with the help of Tiananmen Protests, talented scholars with moral integrity seized power in the Party and state and brought prosperity to China. The second edition of the book will be published within a few days to mark the 25th anniversary of Tiananmen Protests All the parts in the first edition remain in the second edition with a few changes due to information available later and better understanding. There are also some changes for improvements of style. The new parts are Chapters 12-19 on events in China after the first edition was published: The fierce power struggle for succession between reformists and conservatives; Xi Jinping winning all elders’ support during his mysterious disappearance for 2 weeks in early September, 2012; and Xi Jinping Cyclone. Chan Kai Yee's new book: SPACE ERA STRATEGY: The Way China Beats The US An eye-opening book that tells the truth how the US is losing to China. The US is losing as it adopts the outdated strategy of Air-Sea Battle while China adopts the space era strategy to pursue integrated space and air capabilities: It is losing due to its diplomacy that has given rise to Russian-Chinese alliance. US outdated strategy has enabled China to catch up and surpass the US in key weapons: Hypersonic weapons (HGV) that Pentagon regards as the weapon that will dominate the world in the future. Aerospaceplane in China’s development of space-air bomber that can engage enemy anywhere in the world within an hour and destroy an entire aircraft carrier battle group within minutes. Anti-satellite (ASAT) weapons, anti-ASAT weapons, stealth aircrafts, drones, AEW&C, etc. The book gives detailed descriptions of China’s weapon development based on information mainly from Chinese sources that the author monitors closely. U.S. Must Not Be Beaten by China! China is not a democracy. Its political system cannot prevent the emergence of a despotic leader or stop such a leader when he begins to bring disasters to people. A few decades ago, Mao Zedong, the worst tyrant in world history did emerge and bring disasters to Chinese people. He wanted to fight a nuclear war to replace capitalism with communism but could not bring nuclear holocaust to world people as China was too weak and poor at that time. If a despot like Mao Zedong emerges when China has surpassed the US in military strength, world people will suffer the misery experienced by Chinese people in Mao era. China surpassing the US in GDP is not something to worry about as China has the heavy burden to satisfy its huge population, but China surpassing the US in military strength will be world people’s greatest concern if China remains an autocracy. US people are of much better quality than Chinese people. What they lack is a wise leader to adopt the correct strategy and diplomacy and the creative ways to use its resources in developing its military capabilities. I hope that with the emergence of a great leader, the US can put an end to its decline and remain number one in the world. China, US, space era strategy, air-sea battle, space-air bomber, arms race, weapon development, chan kai yee
View all posts by chankaiyee2 »
« Chinese Premier Wen Jiabao’s swansong on democracy
China May home prices fall, pace of declines picks up »