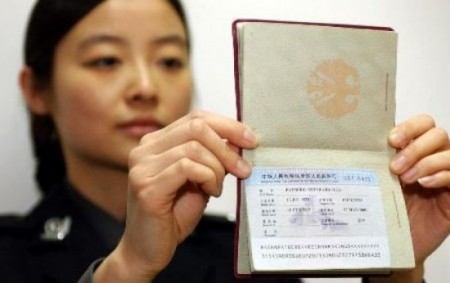 The regulation, ratified by the Standing Committee of the National People’s Congress, shortens the minimum duration of residential certificates for foreigners carrying a work visa to 90 days – half of the current period.

“The rule also bans any organisation or individual from employing expatriates without either a work visa or a residential certificate for foreigners working in China, Xinhua reported.

The Public Security Ministry was now entitled to deport foreigners who violated the regulation, the report said.

Offenders would be barred from entering China for 10 years from their date of expulsion.

The full report from SCMP

Top legislature approves new set of regulations aimed at people who come for short-term projects but remain after their employment contract ends.

The regulation ratified by the Standing Committee of the National People’s Congress shortens the minimum duration of residential certificates for foreigners carrying a work visa to 90 days – half of the current period.

The rule also bans any organisation or individual from employing expatriates without either a work visa or a residential certificate for foreigners working in China, Xinhua reported.

Public and state security bodies have been authorised to restrict expatriates from living or working in certain areas when it is deemed necessary for public security reasons.

The regulation is said to target foreigners who have entered China illegally, have overstayed or are working illegally.

The number of immigration prosecutions involving foreigners doubled from 10,000 in 1995 to 20,000 last year, official statistics show.

In addition, the Public Security Ministry was now entitled to deport foreigners who violated the regulation, the report said.

Offenders would be barred from entering China for 10 years from their date of expulsion.

The law comes into effect on July 1 next year, superseding the current two laws governing the immigration and emigration of foreigners and citizens of China.

“Practically speaking, the mainland authorities have more or less carried out similar measures for the past few years without the support of a relevant regulation,” Ong said. The regulation spelled out rules which both foreigners and law enforcers would abide by. “It is, after all, in line with international standards in this regard,” Ong said.

China’s rapid economic growth over the past three decades has attracted a growing number of foreigners for study or work.

Xinhua reported on June 19 that hundreds of Africans demonstrated in Guangzhou and demanded an official investigation a day after a Nigerian man was found dead in a local police station. The protesters turned violent, leading to clashes with hundreds of police and damage to police vehicles.

It was suspected that Celestine Elebechi was seriously beaten by police for his involvement in a traffic dispute before he fell into a coma on June 18.

Police allegedly left Elebechi in his cell instead of sending him to hospital for treatment.

As a centre of wholesaling businesses ranging from garments and electric appliances to toys and stationery, Guangzhou is home to tens of thousands of African traders and entrepreneurs.

Author of the book "Tiananmen's Tremendous Achievements" about how with the help of Tiananmen Protests, talented scholars with moral integrity seized power in the Party and state and brought prosperity to China. The second edition of the book will be published within a few days to mark the 25th anniversary of Tiananmen Protests All the parts in the first edition remain in the second edition with a few changes due to information available later and better understanding. There are also some changes for improvements of style. The new parts are Chapters 12-19 on events in China after the first edition was published: The fierce power struggle for succession between reformists and conservatives; Xi Jinping winning all elders’ support during his mysterious disappearance for 2 weeks in early September, 2012; and Xi Jinping Cyclone. Chan Kai Yee's new book: SPACE ERA STRATEGY: The Way China Beats The US An eye-opening book that tells the truth how the US is losing to China. The US is losing as it adopts the outdated strategy of Air-Sea Battle while China adopts the space era strategy to pursue integrated space and air capabilities: It is losing due to its diplomacy that has given rise to Russian-Chinese alliance. US outdated strategy has enabled China to catch up and surpass the US in key weapons: Hypersonic weapons (HGV) that Pentagon regards as the weapon that will dominate the world in the future. Aerospaceplane in China’s development of space-air bomber that can engage enemy anywhere in the world within an hour and destroy an entire aircraft carrier battle group within minutes. Anti-satellite (ASAT) weapons, anti-ASAT weapons, stealth aircrafts, drones, AEW&C, etc. The book gives detailed descriptions of China’s weapon development based on information mainly from Chinese sources that the author monitors closely. U.S. Must Not Be Beaten by China! China is not a democracy. Its political system cannot prevent the emergence of a despotic leader or stop such a leader when he begins to bring disasters to people. A few decades ago, Mao Zedong, the worst tyrant in world history did emerge and bring disasters to Chinese people. He wanted to fight a nuclear war to replace capitalism with communism but could not bring nuclear holocaust to world people as China was too weak and poor at that time. If a despot like Mao Zedong emerges when China has surpassed the US in military strength, world people will suffer the misery experienced by Chinese people in Mao era. China surpassing the US in GDP is not something to worry about as China has the heavy burden to satisfy its huge population, but China surpassing the US in military strength will be world people’s greatest concern if China remains an autocracy. US people are of much better quality than Chinese people. What they lack is a wise leader to adopt the correct strategy and diplomacy and the creative ways to use its resources in developing its military capabilities. I hope that with the emergence of a great leader, the US can put an end to its decline and remain number one in the world. China, US, space era strategy, air-sea battle, space-air bomber, arms race, weapon development, chan kai yee
View all posts by chankaiyee2 »
« Machine guns for China’s police forces
July 1 1997 Hong Kong returned to China »