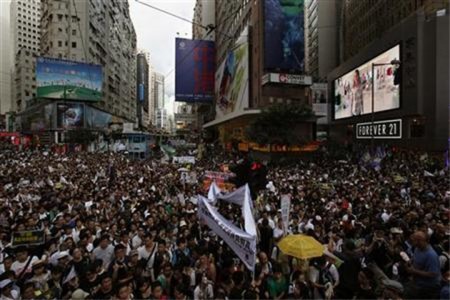 A pro-democracy heckler interrupted a speech by Chinese President Hu Jintao at the swearing-in of Hong Kong’s new leader on Sunday and tens of thousands of residents marched to protest Chinese rule on the 15th anniversary of the Asian financial hub’s return to Beijing’s control.

The outpouring of discontent underscored rising tensions between the Communist mainland and the vibrant city of 7 million that was returned to China in 1997 after more than a century of British colonial rule. While much of the discontent revolves around growing economic inequality and stunted democratic development, Hong Kongers are also upset over what they see as arrogant Chinese behaviour – wealthy mainlanders taking over retail outlets during flashy Hong Kong shopping trips, for example, or even the choice of language during Sunday’s swearing-in ceremony, Beijing-accented Mandarin instead of the Cantonese dialect spoken locally.

A demonstrator who tried to interrupt Hu as he began his address was bundled away by security officials. The man, one of the guests invited to the inauguration, waved a small flag and yelled slogans calling for China’s leaders to condemn the brutal June 4, 1989, crackdown on protesters in Beijing’s Tiananmen Square. He also called for an end to one-party rule in China. Hu took no notice and continued to read his speech, but the incident marred what was supposed to be a carefully orchestrated visit emphasising strengthened ties between Hong Kong and mainland China.

Leung, a police officer’s son, replaces career bureaucrat Tsang, who took office in 2005 and is barred from another term.

Leung was chosen as chief executive in March, winning 689 votes from a 1,200-seat committee of business elites who mostly voted according to Beijing’s wishes. Hong Kong’s 3.4 million registered voters, who can vote for neighbourhood councillors and half of all lawmakers, had no say.

In mid-afternoon, tens of thousands of protesters began marching toward the newly-built government headquarters complex on Hong Kong Island in sweltering heat, beating drums and waving British colonial flags in a gesture of nostalgia for an era during which democratic rights were limited but the rule of law was firmly in place.

The protesters jammed the route of the march, a series of thoroughfares bordered by high-rise apartments and office buildings. There was occasional tension with the thousands of police officers deployed to maintain order, but by and large the event went off peacefully.

Organisers said more than 400,000 participated while police estimated there were 63,000 at the procession’s peak. Hu left Hong Kong before the march began.

In his speech, Hu said Hong Kong residents now have more democratic rights and freedoms than ever before – a reminder that China has largely kept the promise it made when it regained the territory from Britain to keep Hong Kong’s relatively open political system in place for 50 years.

But that did little to assuage the feelings of the protesters, who see China’s Communist Party rule as strongly at odds with the values that many inherited from a British-influenced education, and the continuing spread of democracy to Asian neighbours like South Korea and Chinese-speaking Taiwan.

“China’s way of thinking is totally different from ours,” said builder Bono Lau, 46. “Tung Chee-hwa talked about one country, two systems but there’s no more of that nowadays.”

Beijing has pledged that Hong Kong can elect its own leader in 2017 and all legislators by 2020 at the earliest, but no roadmap has been laid out.

Calls for democracy have been catalysed by the stunted election that catapulted Leung to power and by corruption scandals surrounding his predecessor. Ordinary Hong Kongers fear that the political system in place since 1997 has resulted in the city’s billionaire tycoons having too much influence over senior government officials. Government data now show that income inequality has risen to its highest level in four decades.

Leung himself was implicated in an embarrassing scandal just last week when it emerged that he had made six illegal additions to his mansion in an exclusive neighbourhood on Hong Kong Island’s Victoria Peak.

General Manager at Craig Hill Training Services * Get an Australian diploma by studying in your own country * Get an Australian diploma using your overseas study and work experience * Diplomas can be used for work or study in Australia and other countries. * For more information go to www.craighill.net
View all posts by Craig Hill »
« July 1 1997 Hong Kong returned to China
Sydney vies to be latest offshore yuan market »