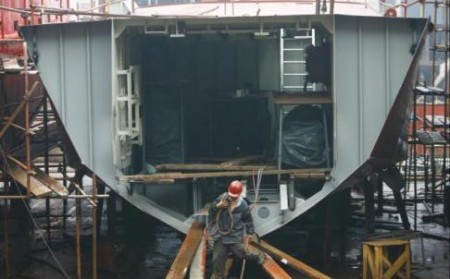 China’s vast manufacturing sector has been badly hit by slowing new orders, two complementary surveys showed, a sign that the pace of growth in the world’s second-largest economy will weaken well into the third quarter.

The final reading of the HSBC China manufacturing purchasing managers’ index (PMI) for August fell to a seasonally adjusted 47.6, its lowest level since March 2009, down from 49.3 in July and slightly below a flash reading of the index late last month.

It followed China’s official factory purchasing managers’ index (PMI) – one of the early indicators of the state of the economy – which fell to a lower-than-expected 49.2 in August, the National Bureau of Statistics said on Saturday.

It was the first time since November 2011 that the official PMI had fallen below 50, which separates expansion from contraction. Economists polled by Reuters last week had expected it to slip to 50 from 50.1 in July.

The HSBC PMI though has been below 50 for 10 straight months.

Chief among manufacturers’ concerns are the softness in new orders as demand falters, particularly from the euro zone.

The HSBC new orders sub-index fell to its lowest point since March 2009, helping drag output back into contraction after a more hopeful July. The HSBC output sub-index is at its lowest level since March.

The official survey also showed new orders falling as the sub-index dropped for the fourth month in a row to 48.7, while export orders stabilised at 46.6. The output sub-index eased to 50.9 in August from July’s 51.8, the statistics bureau said.

Expectations for when growth would pick up following six consecutive quarters of slowing down have been steadily pushed back through 2012. Weaker-than-expected data in July cooled market expectations again.

Beijing is moving cautiously in trying to support the economy in what it calls a “prudent” policy stance for fear of re-igniting property and inflation risks.

China cut interest rates in June and July and has been injecting cash into money markets to ease credit conditions. The latest data raises doubts as to whether Beijing has done enough to stop the slowdown from extending to a seventh quarter, so analysts believe it will take further steps to try to lift the economy.

However, some are starting to doubt that any forthcoming action will be dramatic.

“We think there are four things going on here. First, the government has underestimated the pace of the slowdown and is behind the curve. Second, there is an element of caution still at higher levels, with a quite reasonable fear over reliving the excesses of 2009-10,” wrote Xianfeng Ren and Alistair Thornton of IHS Global in Beijing, referring to the legacy of debt after China’s massive stimulus during the global financial crisis.

In addition, policy tools are losing effectiveness as capital flows out of China and the demand for loans remains weak, they wrote.

“Lastly, as if it had escaped anyone’s attention, there is a once-a-decade wholesale leadership swap happening in the next couple of months – minds are not solely focused on the economy,” they added.

A separate government PMI of the services sector painted a different picture, pointing to a pick up in activity as firms were able to pass through higher input prices. The PMI rose to 56.3 from 55.6 in July.

Thus far, and in contrast to heavy job cuts during the 2008 global economic crisis, employment has held up reasonably well, assuaging fears of social unrest in a politically sensitive year and allowing planners to hold off on aggressive stimulus measures.

“The economy is performing at below an 8 per cent rate of growth this year — the number that for nearly a decade the government had assumed it needed to secure in order to generate sufficient job creation to ensure social stability,” wrote Nick Consonery, of political risk consultancy Eurasia Group.

“Yet all available evidence suggests that the country has only a limited unemployment problem,” he wrote last week, arguing that will give policymakers the confidence to stay the course.

But policy could change if employment begins to show signs of consistent strain. The employment sub-index of the official PMI showed a third month of contraction in August, slipping to 49.1.

The employment sub-index for the HSBC survey — whose private-sector respondents are more likely to react quickly in hiring and firing — reached 47.6, its lowest point since March 2009 and its sixth month below 50.

The official PMI generally paints a rosier picture of the factory sector than the HSBC PMI. The official survey focuses on big, state-owned firms, while the HSBC PMI targets smaller, private firms that have more limited access to bank loans.

The two surveys also differ in their seasonal adjustment.

The latest Reuters poll showed China’s annual economic growth could pick up to 7.9 per cent in the third quarter from a three-year low of 7.6 per cent in the second quarter in response to government policy fine-tuning.

But the gloomy data has led some economists, like Li-Gang Liu and Zhou Hao of ANZ Bank, to forecast slower growth in the third quarter than the second.

“We believe that China’s two interest rate cuts and liquidity injections into the market via large-scale reverse repos have not had substantial effect as many data show China’s economic growth momentum is clearly decelerating,” they wrote in a report on Saturday.

General Manager at Craig Hill Training Services * Get an Australian diploma by studying in your own country * Get an Australian diploma using your overseas study and work experience * Diplomas can be used for work or study in Australia and other countries. * For more information go to www.craighill.net
View all posts by Craig Hill »
« New scandal in China, key official sidelined over car crash
China’s Hu and Wen blasted by party paper editor »

6 thoughts on “Surveys point to slowdown in Chinese economy”