The mystery of China’s carrier-based aircraft 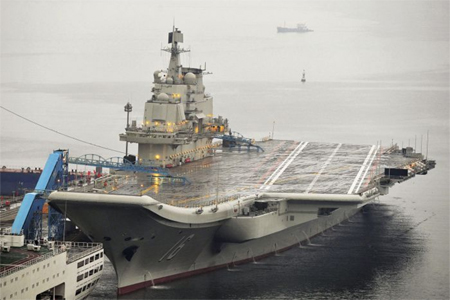 Don’t you think it ridiculous to commission an aircraft carrier without aircraft?

And the commissioning ceremony was so grand that it was attended by both General Secretary Hu Jintao and Premier Wen Jiabao.

If the carrier remains without aircraft for a long time, will it not become a laughingstock instead of something they can boast of?

Trefor Moss, an independent journalist based in Hong Kong and former Asia-Pacific editor for Jane’s Defence Weekly, said, “the Liaoning’s primary objective” is “not to make other countries feel scared; but to make Chinese people feel proud”.

Let’s remember that China began to refit the carrier about 8 years ago when there was no tension in the East and South China Seas, so that there is no need to make Chinese people feel proud for the carrier. Certainly, China made its long-term plan for the development of its aircraft fleet long ago. It has nothing to do with making Chinese people proud.

What was China’s “secret” plan then? It seemed a secret plan, as China said that the hull was intended for a casino when it was purchased. No one expected that China had a long-term plan to refit it and make it operational.

However, it is obvious to those who understand Chinese history and Chinese people’s mindset that a nation who was bullied for more than a century by foreign powers wants to be strong enough to prevent any future bullying.

In my post “Obama’s Generous New Year Gift to China” on January 28 (http://tiananmenstremendousachievements.wordpress.com), I said, “China knows well that its weapons are inferior now; therefore, its leaders, political scientists, well-known journalists and academics have the consensus that China needs two decades of peace. They believe that by 2030, its economy will be much bigger and its weapons will be superior to put an end to its century-long history of being bullied by other countries.”

China’s slow refitting of the carrier proved its intention to become a military superpower to put an end to the history in 2 decades.

Ming Pao says in its report on September 27: As far back as in 1987, the Chinese navy recruited 9 navy air force pilots and trained them to be reserve captains for China’s aircraft carriers.

Obviously, China had formulated an all-round plan for the development of its carrier fleet before it began to refit the carrier 8 years ago.

In the seven years when the carrier was being refitted, China was busy developing all the equipment required by the carrier so that it has now been installed with all the necessary equipment including the engines, taking-off and landing gears, active phased array radar similar to that used on US Aegis Destroyer, SS-N-19 anti-ship missiles and SA-N-9 anti-aircraft missiles.

China did not do so in a hurry. However, in July 2010, China reacted angrily at statements concerning the South China Sea disputes by US Secretary of State Hillary Rodham Clinton during an Asean security gathering. It began to quicken the development of its navy. It conducted the first test of its aircraft carrier in a hurry in August last year when the boat had not yet been able to sail on its own.

Since the US announcement of its return to Asia encouraged some South Asian countries to confront China in maritime territorial disputes, China began its arms race with the US in earnest.

It launched its third 071 landing platform dock (LPD) in September 2011 and a fourth during the Chinese Lunar New Year Festival in early 2012. The Festival is the most important holiday for Chinese people and normally, nobody works on the holiday. (071 LPD is a 20,000-ton amphibious transport dock similar to the US-built San Antonio-class LPD).

In addition, China put its own satellite GPS system into trial operation and declared its plan to launch 6 more satellites in 2012 to improve the system. Guided by this system, China’s missiles and bombs will be much more accurate.

However, will it take years for the fighter to be ready?

CCTV (China’s Central TV) footage shows traces of aircraft landing on the deck of China’s carrier the Liaoning, and the wings and tail of an aircraft suspected to be a J-15 in the hanger of the carrier.

I believe that test of J-15 on land has completed. As revealed by Xu Yong, a teacher at Air Force Command College, China is now training pilots to take off and land on the carrier.

Certainly, training dozens of pilots for carrier-based aircrafts is not an easy job, but I believe it will not take longer than one year.

China’s enemy will suffer if it thinks that the Chinese carrier is now a tiger without teeth.

The Korean War and China’s wars with India and Vietnam have proved that China is used to conducting surprise attacks.

If you are not on your guard, there may be the occasion that when you think that China’s aircraft carrier is not combat ready, the carrier filled with well-tested J-15 fighters and skilful pilots may conduct a surprise attack to destroy all your air force facilities?

What I have learnt from Chinese military experts, TV talking shows and common people’s talks is that China needs 6 to 8 advanced aircraft carriers, mostly nuclear ones.

China needs to pay much less for those carriers as China is subsidised by its state-owned enterprises in its weapon development while US weapon manufacturers charge excessively high prices.

For example, a 071 LPD costs China only US$300 million, while an American San Antonio-class LPD of similar size and functions costs more than US$1.2 billion.

How long will it take to build so many carriers?

Let us take 071 LPD for example again. China launched its first 071 LPD in December 2006 and its second 071 LPD 4 years later in November 2010, but it launched the third 10 months later and the fourth five months after the third.

When the design is finalised and technology, mature, China may turn out quite a few advanced carriers in a relatively short period of time.

Author of the book "Tiananmen's Tremendous Achievements" about how with the help of Tiananmen Protests, talented scholars with moral integrity seized power in the Party and state and brought prosperity to China. The second edition of the book will be published within a few days to mark the 25th anniversary of Tiananmen Protests All the parts in the first edition remain in the second edition with a few changes due to information available later and better understanding. There are also some changes for improvements of style. The new parts are Chapters 12-19 on events in China after the first edition was published: The fierce power struggle for succession between reformists and conservatives; Xi Jinping winning all elders’ support during his mysterious disappearance for 2 weeks in early September, 2012; and Xi Jinping Cyclone. Chan Kai Yee's new book: SPACE ERA STRATEGY: The Way China Beats The US An eye-opening book that tells the truth how the US is losing to China. The US is losing as it adopts the outdated strategy of Air-Sea Battle while China adopts the space era strategy to pursue integrated space and air capabilities: It is losing due to its diplomacy that has given rise to Russian-Chinese alliance. US outdated strategy has enabled China to catch up and surpass the US in key weapons: Hypersonic weapons (HGV) that Pentagon regards as the weapon that will dominate the world in the future. Aerospaceplane in China’s development of space-air bomber that can engage enemy anywhere in the world within an hour and destroy an entire aircraft carrier battle group within minutes. Anti-satellite (ASAT) weapons, anti-ASAT weapons, stealth aircrafts, drones, AEW&C, etc. The book gives detailed descriptions of China’s weapon development based on information mainly from Chinese sources that the author monitors closely. U.S. Must Not Be Beaten by China! China is not a democracy. Its political system cannot prevent the emergence of a despotic leader or stop such a leader when he begins to bring disasters to people. A few decades ago, Mao Zedong, the worst tyrant in world history did emerge and bring disasters to Chinese people. He wanted to fight a nuclear war to replace capitalism with communism but could not bring nuclear holocaust to world people as China was too weak and poor at that time. If a despot like Mao Zedong emerges when China has surpassed the US in military strength, world people will suffer the misery experienced by Chinese people in Mao era. China surpassing the US in GDP is not something to worry about as China has the heavy burden to satisfy its huge population, but China surpassing the US in military strength will be world people’s greatest concern if China remains an autocracy. US people are of much better quality than Chinese people. What they lack is a wise leader to adopt the correct strategy and diplomacy and the creative ways to use its resources in developing its military capabilities. I hope that with the emergence of a great leader, the US can put an end to its decline and remain number one in the world. China, US, space era strategy, air-sea battle, space-air bomber, arms race, weapon development, chan kai yee
View all posts by chankaiyee2 »
« China speeds up construction of Sansha City on island claimed by Philippines
October 1 1949 Mao Zedong proclaims People’s Republic of China »

6 thoughts on “The mystery of China’s carrier-based aircraft”