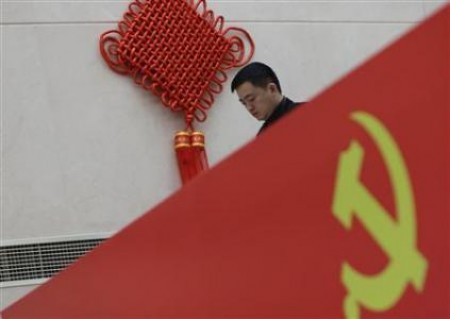 A man walks past a logo of the CPC in Beijing

Reuters exclusive report by Benjamin Kang Lim and Michael Martina from Beijing: “China’s outgoing leader and his likely successor are pushing the ruling Communist Party to adopt a more democratic process this month for choosing a new leadership, sources said, in an attempt to boost its flagging legitimacy in the eyes of the public.

“The extent of the reform would be unprecedented in communist China where elections for the highest tiers of the party, held every five years, have been mainly exercises in rubber-stamping candidates already agreed upon by party power-brokers.

“The Communist Party, which has held unbroken power since 1949, is struggling to maintain its popular legitimacy in the face of rising inequality, corruption and environmental degradation, even as the economy continues to bound ahead.

“President Hu Jintao and his heir, Xi Jinping, have proposed that the party’s 18th Congress, which opens on Thursday, should hold elections for the elite Politburo where for the first time there would be more candidates than available seats, said three sources with ties to the party leadership.

“The Politburo, currently 24 members, is the second-highest level of power in China from which the highest decision-making body, the Politburo Standing Committee, is chosen.

“They are chosen by the roughly 200 full members of the Central Committee which is in turn chosen by the more than 2,000 delegates at this week’s Congress.

“Under their proposal, there would be up to 20 percent more candidates than seats in the new Politburo in an election to be held next week, the sources said. It was unclear if competitive voting would also be extended to the Standing Committee.

“‘Hu wants expanding intra-party democracy to be one of his legacies,’ one source said, requesting anonymity to avoid repercussions for discussing secretive elite politics.

“‘It would also be good for Xi’s image,’ the source added.

“Under the proposal, a Politburo with, say, 25 seats would be contested by a maximum of 30 candidates, leaving five of the candidates put forward by party power-brokers at risk of defeat.

“Given the Standing Committee is chosen from the Politburo, such a reform could also lead to surprises at the most elite level of the party, which is normally decided by painstaking consensus in a series of back-room negotiations.”

“At the last congress in 2007, there were 8 percent more candidates than seats for the Central Committee, up from 5 percent in 2002, according to CentralPartySchool professor Gao Xinmin writing in the Study Times, a party mouthpiece.

“Under the proposal, that could rise to up to 40 percent this time, the sources said.

“The Hu-Xi proposal has been put forward at a time when the party is split between leftists who worry about major economic inequalities that have opened up after three decades of free-market reforms and those who want to accelerate those reforms.

“The split revealed itself dramatically this year in the downfall of Politburo member Bo Xilai, a favorite of the left”.

Author of the book "Tiananmen's Tremendous Achievements" about how with the help of Tiananmen Protests, talented scholars with moral integrity seized power in the Party and state and brought prosperity to China. The second edition of the book will be published within a few days to mark the 25th anniversary of Tiananmen Protests All the parts in the first edition remain in the second edition with a few changes due to information available later and better understanding. There are also some changes for improvements of style. The new parts are Chapters 12-19 on events in China after the first edition was published: The fierce power struggle for succession between reformists and conservatives; Xi Jinping winning all elders’ support during his mysterious disappearance for 2 weeks in early September, 2012; and Xi Jinping Cyclone. Chan Kai Yee's new book: SPACE ERA STRATEGY: The Way China Beats The US An eye-opening book that tells the truth how the US is losing to China. The US is losing as it adopts the outdated strategy of Air-Sea Battle while China adopts the space era strategy to pursue integrated space and air capabilities: It is losing due to its diplomacy that has given rise to Russian-Chinese alliance. US outdated strategy has enabled China to catch up and surpass the US in key weapons: Hypersonic weapons (HGV) that Pentagon regards as the weapon that will dominate the world in the future. Aerospaceplane in China’s development of space-air bomber that can engage enemy anywhere in the world within an hour and destroy an entire aircraft carrier battle group within minutes. Anti-satellite (ASAT) weapons, anti-ASAT weapons, stealth aircrafts, drones, AEW&C, etc. The book gives detailed descriptions of China’s weapon development based on information mainly from Chinese sources that the author monitors closely. U.S. Must Not Be Beaten by China! China is not a democracy. Its political system cannot prevent the emergence of a despotic leader or stop such a leader when he begins to bring disasters to people. A few decades ago, Mao Zedong, the worst tyrant in world history did emerge and bring disasters to Chinese people. He wanted to fight a nuclear war to replace capitalism with communism but could not bring nuclear holocaust to world people as China was too weak and poor at that time. If a despot like Mao Zedong emerges when China has surpassed the US in military strength, world people will suffer the misery experienced by Chinese people in Mao era. China surpassing the US in GDP is not something to worry about as China has the heavy burden to satisfy its huge population, but China surpassing the US in military strength will be world people’s greatest concern if China remains an autocracy. US people are of much better quality than Chinese people. What they lack is a wise leader to adopt the correct strategy and diplomacy and the creative ways to use its resources in developing its military capabilities. I hope that with the emergence of a great leader, the US can put an end to its decline and remain number one in the world. China, US, space era strategy, air-sea battle, space-air bomber, arms race, weapon development, chan kai yee
View all posts by chankaiyee2 »
« China’s economic growth at stake as Communist Party meets
Hu Jintao starts the XVIII Congress of the Communist Party of China; view from Poland »