Japan seeks firmer pact with the US to confront China 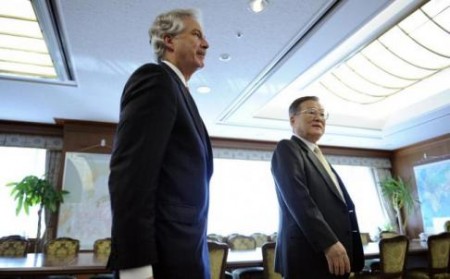 Japan‘s defence minister, Satoshi Morimoto, said yesterday he wanted to revise his nation’s security alliance with the United States to place more emphasis on the threat from China to Japan’s southeastern islands.

Morimoto wants to update guidelines that govern how the two allies’ militaries would co-operate during a crisis to include the potential for a maritime clash with China. Tensions between Japan and China have risen in recent months over islands in the East China Sea known as the Diaoyus in China and the Senkakus in Japan.

Morimoto did not specify what changes he would seek in the agreement. He told reporters he had already informed the US of Japan’s desire to revisit the guidelines and yesterday sent the deputy minister of defence, Akihisa Nagashima, to Washington for talks.

Morimoto noted that the last time the US and Japan changed the guidelines was in 1997, in response to tensions with North Korea over its nuclear programme.

“The situation in Asia is not limited to the Korean Peninsula, but there is also the problem of China’s increasing maritime activities,” Morimoto said. “In light of the qualitative changes in the security environment, I want to start a revision of the present state of the US-Japan alliance.”

Two years ago, US Secretary of State Hillary Rodham Clinton said the islands fell under the security alliance, requiring the US military to come to Japan’s aid during a possible clash there.

Some in Japan have questioned whether the US would risk a war with China over what are essentially barren rocks. Japanese leaders have said they want Washington to go a step further and openly support their claims to the islands.

While the US has maintained its neutrality, Chinese officials say Washington bears some responsibility in creating the dispute. They say the US essentially picked sides in 1972 when it returned the islands along with Okinawa to Japan without consulting China.

Yesterday’s effort to reach out to Washington was in line with the conservative stance of Japan’s prime minister, Yoshihiko Noda, who has sought stronger ties with the US.

Relations were damaged three years ago when one of Noda’s predecessors, the left-leaning Yukio Hatoyama, tried to scrap a laboriously negotiated agreement to relocate a US Marines air base.

Nagashima will also try to smooth out a much smaller rift with the US over a Japanese decision to cancel a joint military drill that was to have taken place this week. The drill, which would have simulated the recapture of a remote Japanese island from an unspecified foreign invader, was apparently deemed by Japan to be too provocative to China.

Source: SCMP “Japan seeks firmer pact with the US to confront China”

China News is a collection of original and reposted news and articles about China, collected from the best sites around the web. It is also a place for writers about China to promote their own sites.
View all posts by China News »
« Google is blocked in China as party congress begins
China’s Liaoning aircraft carrier set for sea trials of take-offs and landings »