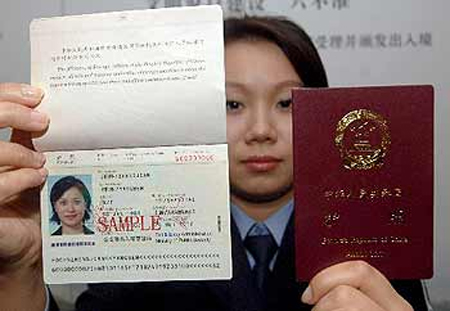 The Philippines and Vietnam condemned Chinese passports containing a map of China‘s disputed maritime claims on Thursday, branding the new design a violation of their sovereignty.

The map means countries disputing the Chinese claims will have to stamp microchip-equipped passports of countless visitors, in effect acquiescing to the Chinese point of view.

Stand-offs between Chinese vessels and the Philippine and Vietnamese navies in the South China Sea have become more common as China increases patrols in waters believed to hold vast reserves of oil and natural gas.

“The Philippines strongly protests the inclusion of the nine-dash lines in the e-passport as such image covers an area that is clearly part of the Philippines’ territory and maritime domain,” Philippine Foreign Secretary Albert del Rosario said on Thursday, referring to the lines on the passport map.

Vietnam had written to China in protest against the new passports and had asked it to “reverse their incorrect content”, said Luong Thanh Nghi, a spokesman for Vietnam’s foreign ministry.

“This action by China has violated Vietnam’s sovereignty to the Paracel and Spratly islands as well as our sovereign rights and jurisdiction to related maritime areas in the South China Sea, or the East Sea,” he told a news conference.

Malaysia and Brunei are also claimants in the dispute which overshadowed an Asian leaders’ summit in Cambodia this week. China is also embroiled in a territorial dispute with Japan.

“The passports’ maps with their outlines of China are not targeting a specific country. China is willing to actively communicate with the relevant countries and promote the healthy development of Sino-foreign personnel exchanges,” it said.

It was not clear when China began printing the new passports.

The dispute spilled over into Southeast Asia’s normally serene government summits this year, with China accused of seeking to stall debate and divide the 10-member Association of Southeast Asian Nations (ASEAN) over the issue.

Philippine diplomats accused China at this week’s summit in Phnom Penh of using its influence over host Cambodia to push a formal statement saying that ASEAN did not want to “internationalize” the dispute.

The Philippines, which sees its alliance with the United States as a crucial check on China’s claims at a time when the United States is shifting its military focus back to Asia, protested to Cambodia and succeeded in having that clause removed from the final statement.

Author of the book "Tiananmen's Tremendous Achievements" about how with the help of Tiananmen Protests, talented scholars with moral integrity seized power in the Party and state and brought prosperity to China. The second edition of the book will be published within a few days to mark the 25th anniversary of Tiananmen Protests All the parts in the first edition remain in the second edition with a few changes due to information available later and better understanding. There are also some changes for improvements of style. The new parts are Chapters 12-19 on events in China after the first edition was published: The fierce power struggle for succession between reformists and conservatives; Xi Jinping winning all elders’ support during his mysterious disappearance for 2 weeks in early September, 2012; and Xi Jinping Cyclone. Chan Kai Yee's new book: SPACE ERA STRATEGY: The Way China Beats The US An eye-opening book that tells the truth how the US is losing to China. The US is losing as it adopts the outdated strategy of Air-Sea Battle while China adopts the space era strategy to pursue integrated space and air capabilities: It is losing due to its diplomacy that has given rise to Russian-Chinese alliance. US outdated strategy has enabled China to catch up and surpass the US in key weapons: Hypersonic weapons (HGV) that Pentagon regards as the weapon that will dominate the world in the future. Aerospaceplane in China’s development of space-air bomber that can engage enemy anywhere in the world within an hour and destroy an entire aircraft carrier battle group within minutes. Anti-satellite (ASAT) weapons, anti-ASAT weapons, stealth aircrafts, drones, AEW&C, etc. The book gives detailed descriptions of China’s weapon development based on information mainly from Chinese sources that the author monitors closely. U.S. Must Not Be Beaten by China! China is not a democracy. Its political system cannot prevent the emergence of a despotic leader or stop such a leader when he begins to bring disasters to people. A few decades ago, Mao Zedong, the worst tyrant in world history did emerge and bring disasters to Chinese people. He wanted to fight a nuclear war to replace capitalism with communism but could not bring nuclear holocaust to world people as China was too weak and poor at that time. If a despot like Mao Zedong emerges when China has surpassed the US in military strength, world people will suffer the misery experienced by Chinese people in Mao era. China surpassing the US in GDP is not something to worry about as China has the heavy burden to satisfy its huge population, but China surpassing the US in military strength will be world people’s greatest concern if China remains an autocracy. US people are of much better quality than Chinese people. What they lack is a wise leader to adopt the correct strategy and diplomacy and the creative ways to use its resources in developing its military capabilities. I hope that with the emergence of a great leader, the US can put an end to its decline and remain number one in the world. China, US, space era strategy, air-sea battle, space-air bomber, arms race, weapon development, chan kai yee
View all posts by chankaiyee2 »
« A Chinese education, for a price
Did news story on riches of China’s Premier weaken reformists? »