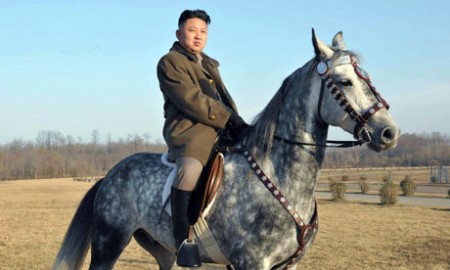 The online version of China’s Communist party newspaper has hailed a report by The Onion naming North Korean dictator Kim Jong-un as the sexiest man alive – not realising it is satire.

The People’s Daily ran a 55-page photo spread on its website in a tribute to the leader, under the headline North Korea’s top leader named The Onion’s Sexiest Man Alive for 2012.

Quoting the Onion’s spoof report, the Chinese newspaper wrote: “With his devastatingly handsome, round face, his boyish charm and his strong, sturdy frame, this Pyongyang-bred heartthrob is every woman’s dream come true.”

The People’s Daily cited the Onion as saying: “Blessed with an air of power that masks an unmistakable cute, cuddly side, Kim made this newspaper’s editorial board swoon with his impeccable fashion sense, chic short hairstyle, and, of course, that famous smile.”Photos with the story include Kim on horseback squinting into the light, Kim waving towards a military parade, Kim wearing sunglasses and smiling, and touring a facility with his wife.

It is not the first time a state-run Chinese newspaper has fallen for a fictional report by The Onion. In 2002, the Beijing Evening News, one of the capital city’s biggest tabloids at the time, published as news the fictional account that the US Congress wanted a new building and that it might leave Washington. The Onion article was a deadpan spoof of the way sports teams threaten to leave cities in order to get new stadiums.

China News is a collection of original and reposted news and articles about China, collected from the best sites around the web. It is also a place for writers about China to promote their own sites.
View all posts by China News »
« China: Intensive arms race causes stress on elite engineers
China’s mafia-style hack attack drives California firm to brink »