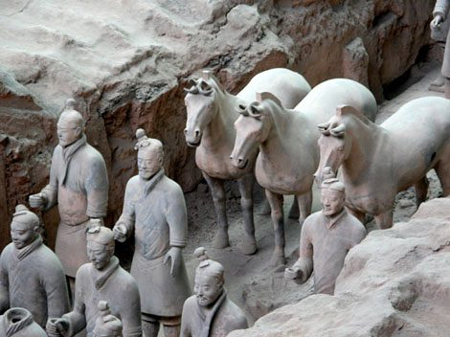 China has unearthed the ruins of an ancient palace near the tomb of the country’s first emperor that was already famed for its terracotta soldiers, state media said on Saturday.

The discovery is the latest at the mausoleum, which dates back more than two millennia and became one of the greatest modern archaeological finds after a peasant digging a well stumbled upon the life-size warriors in 1974.

The palace “is the largest complex ever found at the cemetery”, the Xinhua news agency said, citing Sun Weigang, a researcher at the archaeology institute of northern Shaanxi province where the site is located.

Qin Shihuang, a ruler during the Qin dynasty (221-207 BC), presided over China’s unification and declared himself its first emperor.

Based on its foundations, the palace is believed to extend 690 by 250 metres, nearly a quarter of the size of Beijing’s iconic Forbidden City, Xinhua said, citing Sun.

The Forbidden City located at the heart of the capital served as an imperial palace for the Ming and Qing dynasties from the 14th through the early 20th century.

The tomb-side palace “showed emperor Qin Shihuang’s wish to continue to live in imperial grandeur even during his afterlife”, Sun said.

The emperor ordered the building of the terracotta soldiers that surround the mausoleum in the hopes they would follow him into the afterlife.

As many as 6,000 are believed to stand in the largest of three pits at the site, according to the United Nations Educational, Scientific and Cultural Organisation (Unesco), which declared the army a World Heritage Site in 1987.

Archaeologists uncovered 110 new warriors in June this year, along with 12 pottery horses, parts of chariots, weapons and tools, in part of a three-year effort.

General Manager at Craig Hill Training Services * Get an Australian diploma by studying in your own country * Get an Australian diploma using your overseas study and work experience * Diplomas can be used for work or study in Australia and other countries. * For more information go to www.craighill.net
View all posts by Craig Hill »
« China: Officials squander ill-gotten money by eating endangered animals
Philippine Government denounces China’s new maritime law (South China Sea) »