In Changzhou there is a historical theme park called Yancheng ChunQiu Land.

It is a beautiful park built up to illustrate a part of Chinese history called Spring and Autumn period.

From around year 770 BC to 476 BC there was a period in Chinese history called Spring and Autumn period.

During this time the feudal system of the dynasty weakened to a point where it was replaced by different kings and warlords.This started many conflicts and wars in the region.

Situated south of the Yangtze River, Changzhou is halfway between Shanghai and Nanjing.Changzhou is an ancient historical and cultural city with the recorded history of 3,200 years.

Another attraction in Changzhou is the Dino Valley Hot springs. It is outdoor hot springs which gives you a “reversed sauna feeling”.

We stepped out in the nearly freezing December air and jumped into the hot water. It was like magic. Steam rising into the air, nice and clean facilities and a lovely little outside bar.

But the main attraction around Changzhou is probably the China Dinosaur Park. It is a massive amusement park including a water land, which was closed now during the winter.

Here, there is something to do and see for everyone.  They have a lot of roller coasters, all in the dinosaur theme. 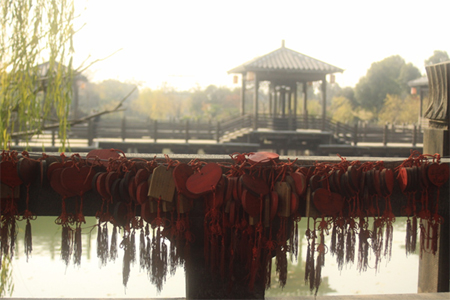 « 2030: China is the top economy
Chinese warships to become common feature around Diaoyus »