Change of guard, but no change in policy; an in-depth analysis from India 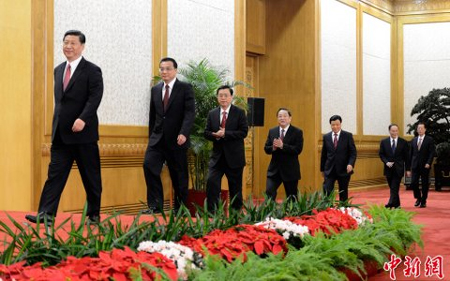 It is undeniable that the transfer of power to the fifth generation leadership at the 18th Congress of the Chinese Communist Party (CCP) has been smooth and orderly; especially the rule providing for the retirement of cadres above the age of 68 has been adhered to.

A Xi Jinping era has indeed begun in China.

It is highly significant that the transition has taken place unaffected by the political uncertainty that has come to prevail in the country since March 2012 as a result of the ouster from the party of Bo Xilai.

It is natural that the focus has turned towards key questions about the new leadership:

A study of biodata and its conclusions

Conclusions on features of the new Politburo are as under:

The new Central Committee has 205 full members and 167 alternate members as against the figures of 204 and 167 in 2007. 64% of its members are new comers. Their average age is 56.1; the new body has 33 women and 39 representatives from ethnic minorities. 95.7 % of the 18th Central Committee members have studied at or above university levels. Representatives from SOEs in the new body number 9, as against 2 in 2007. The new central committee has 41 PLA members, as against the same figure in 2007. In terms of factional representation in it, the picture is unclear.

Important has been Hu Jintao’s decision to step down from his leadership posts in the party as well as in the CMC and hand them over to the new incumbent Xi Jinping without delay.

Hu’s predecessor, Jiang Zemin, however held his post as the CMC head  for two years after he quit from his position of party chief. Notably, the new party supremo Xi Jinping, has openly praised Hu for his ‘voluntary’ decision to hand over  political and military powers. Also significant are failures to enter the CMC of  General Liu Yang, son of former President Liu Shaochi and political commissar of the General Logistics Department, Gen. Zhang Haiyang and Gen. Zhang Youhua, all considered close to the disgraced leader Bo Xilai.

More than three fourth of the total 130-member CDIC, the high level anti-corruption body, to which the PBSC member Wang Qishan has been nominated, are newcomers.

Overall, based on the political background of the leaders who have emerged out of the 18Th CCP Congress, it looks beyond doubt that they belong to two factions – the ‘elitists’ under the influence of Jiang Zemin and ‘populists’ under that of  Hu Jintao, each having developed different outlook and work styles.

But there seems to be no valid ground to question their common faith in the main party policy of reforms and opening up. A factional clash on policies within the CCP can be considered out of question, but organizationally, there is potential for a backlash within the party if an important anomaly remains unaddressed: the continuing over-domination of the ‘princelings’ in the party top bodies which goes against the principles declared in the CCP Congress stipulating ‘selection of officials  in a  democratic, open, competitive and merits based way’.

To understand the contours of likely policy directions for next five years under China’s fifth generation leadership, it would be necessary to closely look at the contents of the key policy document: the report of Hu Jintao, adopted at the 18Th CCP Congress and officially released in full on 17 November 2012.

Worth mentioning first concerns the movement being seen in the party’s ideological stand to suit to new conditions. Reflecting it is the announcement in the report   that the ‘Scientific Outlook on Development’, together with “Marxism-Leninism, Mao Zedong thought, Deng Xiaoping theory and the important thought of Three Represents”, will be the “long time theoretical guidance” for the CCP as it pursues the declared ‘central task of economic development’.

A confirmation to this effect has come through an amendment in the party constitution approved in the congress; the Chinese official media have felt that in this way, the theoretical status of “Scientific Outlook on Development”, a contribution of Hu Jintao, already written into the party constitution, stands further upgraded.

What will be the features of economic model under the new leadership?

The report has stressed the need for the party to follow “four cardinal principles’, of which the party leadership is the main, and support ‘vitality of the state-owned sector of the economy’. It has stipulated that the five aspects of China’s modernization drive should be developed: economy, politics, culture, society and ecology, the last one, figuring for the first time in a party congress document on overall development. It has set a target to double the country’s 2010 gross domestic product and per capita income of rural and urban citizens by 2020.

The report’s call to continue to carry out ‘reform of the political structure’ along with the warning that China will never copy a western political system has been seen before also. However, the chances for intra-party democracy seem to be getting a boost, judging from the wish expressed in the report to make “people’s democracy more extensive, fuller in scope and sounder in practice”.

Interestingly, the official media (Global Times, 9 November 2012) have carried opinions on the opening day of the congress cautioning against the party taking ‘poor political decisions’ as Gorbachev did in the former Soviet Union and favoring the path of ‘wading across the stream by feeling the way’; indications are therefore towards the new leadership taking a cautious line towards political reforms in the party position.

The corruption issue, which has remained prominent in China for some time now, finds a strong echo in the report. In warning corrupt elements, its tone is more strident that the criticisms made in the past in China. It waned that “if the issue is not handled well, it could prove fatal to the party and even cause the collapse of the party and fall of the state; all those who violate party disciplines and state laws whoever they are and whatever power or official positions they hold, must be brought to justice without mercy”. Coming in the wake of Bo Xilai’s ouster from the party, the report is a pointer to the likely continuation of a tough policy of the new Xi Jinping leadership on the corruption issue.

The domestic policy implications of what has been said in the previous four paragraphs, are not difficult to see Under the new leadership of Xi Jinping, no change can be expected from the so far kept party line, called in China as that paving the way for ‘socialism with Chinese characteristics’. The CCP will thus remain supreme in the country and the state control over the economy will not to be diluted.

With respect to foreign policy, the report has expressed willingness to cooperate with other nations adding that China’s resolve is to protect its national interests, without yielding to any outside pressure. The sign is that this formulation will be followed by the new party leadership. With core-interests based Chinese foreign policy continuing, to be more specific Beijing maintaining a foreign policy course with a mix of win-win international diplomatic initiatives and an assertive approach towards on all sovereignty-related issues, there may not be any end soon to China’s tense relations with neighbouring countries having territorial disputes with it.

Military targets identified in the report could signal the likely directions of the new leadership in the defence front. Notable is the report’s announcement that “full military IT applications” will be completed by 2020. Significant is its focus on China protecting its maritime, space and cyberspace Security, developing China as a maritime power with capacity to exploit marine resources and safeguard the country’s maritime interests and building China’s strength to win wars in an information age. The reiteration in the report that the party should have absolute leadership over the army may convey a message that the voices in China in favor of bringing the People’s Liberation Army (PLA) under the state control have still not subsided.

The report approved by the congress signifies the continuation of China’s drive to woo Taiwan. It has suggested setting up of ‘military security trust mechanism’ and signing of a ‘peace treaty’ with Taiwan, along with a warning that there should be no attempt for Taiwan independence and that anyone or any force trying to separate Taiwan from the mainland will not be allowed. Interestingly, there is no reference in the report to the use of force on the Taiwan question.

To sum up, the 18Th CCP Congress has been noteworthy on two counts:

Full contour of China’s political transition will be visible only in March 2013, when the country’s parliament, the NPC, would meet and finish the next set up of government leaders.