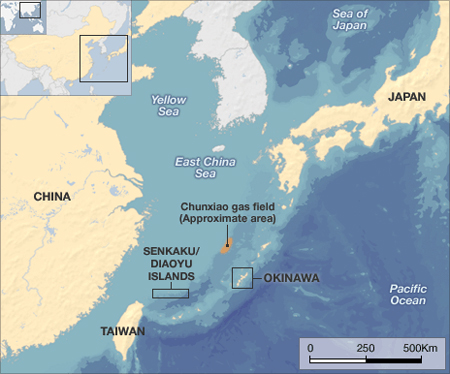 China has submitted to the UN a detailed explanation of its claims to a disputed area of the East China Sea.

It argues that certain geological features prove its territory extends out to a group of islands near Japan.

A UN commission of geological experts will examine China’s submission but does not have the authority to resolve conflicting claims.

Beijing and Tokyo have long laid claim to the islands, known as Senkaku in Japan and Diaoyu in China.

Tensions flared up again in September after the Japanese government bought three of the islands from their private Japanese owner, triggering public protests in some Chinese cities.

Since then Chinese ships have been sailing in and out of waters around the islands, prompting warnings from Japan.

There was another diplomatic spat on Thursday after a Chinese government plane flew near the disputed islands.

Tokyo responded by scrambling fighter jets. Both countries accused the other of violating their air space.

In its submission to the UN, China argues: “Physiognomy and geological characteristics show that the continental shelf in the East China Sea is the natural prolongation of China’s land territory.

“The natural prolongation of the continental shelf of China in the East China Sea extends to the Okinawa Trough, which is an important geographical unit featuring remarkable partition,” Xinhua news agency reports the document as saying.

The islands lie some 200km (124 miles) off Japan’s Okinawa island and beyond China’s 200 nautical mile (370km) exclusive economic zone. They form part of Okinawa prefecture and are controlled by Japan.

Taiwan also lays claim to the islands, which are close to strategically important shipping lanes. The waters around the islands offer rich fishing grounds and are thought to contain oil deposits.

China News is a collection of original and reposted news and articles about China, collected from the best sites around the web. It is also a place for writers about China to promote their own sites.
View all posts by China News »
« China: Local secret police beat petitioner to death
Does China want to use Japanese aircraft as guinea pigs in Senkaku dispute? »