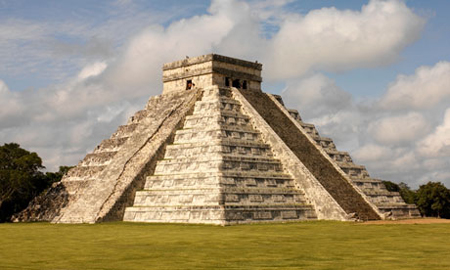 The pyramid in the Mayan city of Chichen Itza

Provincial level authorities in China have announced that they have arrested 93 people for spreading rumours of the impeding – Mayan predicted – apocalypse, Xinhua has reported.

The authorities state that 37 of these arrests have been linked to the ‘Almighty God‘ cult, a Christen group based in north west Qinghai province, also known as the ‘Eastern Lightning‘ group.

Apparently, by coincidence, the group’s sacred literature also predicts the end of the world this coming Friday.

While many of the arrests have been linked to genuine belief in the coming end of the world, others have been down to the more rational activity of profiteering from people’s fears.

The Guardian (UK) reports that 6 people have been arrested in Fujian for selling ‘apocalypse proof’ charms, while other related activity has included gas masks, tinned food and even a RMB300,000 survival pod.

Although the Chinese governments response may be deemed heavy handed, it is at least on the side of the generally accepted opinion of scholars. As Mayanist scholar Mark Van Stone states, “There is nothing in the Maya or Aztec or ancient Mesoamerican prophecy to suggest that they prophesied a sudden or major change of any sort in 2012…The notion of a ‘Great Cycle’ coming to an end is completely a modern invention.”

World watcher, aspiring academic and a struggling learner of Mandarin Editor/writer: alleyeseast.wordpress.com
View all posts by Dan Green »
« Exodus of China’s rich and skilled for better lives
More opportunities than ever for Chinese, Asian investor-immigrants »