China: Xi learns from Castro and Putin in graft fight 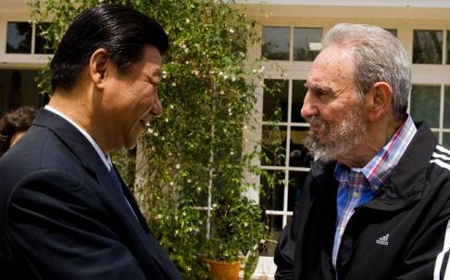 Cuban president Raul Castro and Russian president Vladimir Putin may not have much in common, but Xi Jinping seems to take inspiration from them both.

This can be seen in the president-in-waiting’s effective measures to curb extravagance and over-the-top protocol customarily accorded to senior mainland officials.

The moves are part of Xi’s broad efforts to tackle corruption and restore confidence in the party.

Earlier this month, in the first Politburo meeting since he came to power as the party chief, the 20-odd Politburo members vowed to set an example by banning welcome banners, red carpets and floral arrangements.

They also simplified security details on their outings and inspection trips. The announcement has proved popular with mainlanders, who used to see the over-the-top protocol as a sign of extravagance and officials losing touch with the ordinary people.

Over the past few days, top military officials and the Beijing municipal government have released similar rules.

In a recent internal speech to explain the new working practices, Xi said he drew inspiration from his meetings with Raul Castro during his visit to Cuba in June last year, according to several people briefed about the speech.

During the visit, Xi was invited to a banquet at Raul Castro’s residence. But the Chinese side was told in advance that only six of them could go.

This perplexed the Chinese officials, who were accustomed to enjoying elaborate banquets as part of a big entourage.

When Xi arrived, he found that Raul’s residence was small and the dining room could accommodate only a small number of people.

He recalled that Raul showed him several small plots of land in his backyard where the Cuban president grew food for his family and gave what was left over to the ordinary people. That encounter appears to have left a deep impression on him.

It was little wonder, Xi reportedly said, that Cuba – as a socialist country – could survive so long under decades of harsh sanctions imposed by the United States, because the Cuban leaders still enjoyed strong support from the people.

In the same speech, Xi also cited the example of Putin, who has reportedly refused to divert traffic to make way for his motorcade around the Kremlin, one of the most notoriously congested areas in Russia.

Until Xi announced new measures, the traffic police usually cordoned off two lanes for the motorcades of the senior leaders who entered or left the Zhongnanhai compound, the party headquarters, worsening congestion in downtown Beijing.

He also blasted local officials for saying that because they needed to entertain high-ranking officials, they required government money to build luxury hotels. But really, they wanted to enjoy the luxury and extravagance themselves.

Xi also lamented that some local officials had wanted the government-funded hotels to include so-called presidential suites. But Xi said he and other senior leaders would not stay in these suites in the future.

In another telling episode, Xi also reportedly singled out a previous Politburo document on curbing official corruption issued in July 1989, a few weeks after the government’s bloody crackdown on the massive student demonstrations where corruption was a key issue.

The late paramount leader Deng Xiaoping pushed for the release of the document, in which the Politburo announced measures to shut down several state companies run by the children of senior government officials, including one company run by Deng’s eldest son, Deng Pufang.

Xi reportedly said he compared his new measures with Deng’s document, which he said was even tougher on official corruption and extravagance. Indeed, one of Deng’s measures was to ban the children of senior cadres from engaging in business activities, starting with the Politburo members.

But it goes without saying that this well-known measure advocated by Deng failed miserably as the children of senior cadres, known as princelings, simply ignored Deng’s diktat and went on to build up commercial empires using the political connections of their parents.

Author of the book "Tiananmen's Tremendous Achievements" about how with the help of Tiananmen Protests, talented scholars with moral integrity seized power in the Party and state and brought prosperity to China. The second edition of the book will be published within a few days to mark the 25th anniversary of Tiananmen Protests All the parts in the first edition remain in the second edition with a few changes due to information available later and better understanding. There are also some changes for improvements of style. The new parts are Chapters 12-19 on events in China after the first edition was published: The fierce power struggle for succession between reformists and conservatives; Xi Jinping winning all elders’ support during his mysterious disappearance for 2 weeks in early September, 2012; and Xi Jinping Cyclone. Chan Kai Yee's new book: SPACE ERA STRATEGY: The Way China Beats The US An eye-opening book that tells the truth how the US is losing to China. The US is losing as it adopts the outdated strategy of Air-Sea Battle while China adopts the space era strategy to pursue integrated space and air capabilities: It is losing due to its diplomacy that has given rise to Russian-Chinese alliance. US outdated strategy has enabled China to catch up and surpass the US in key weapons: Hypersonic weapons (HGV) that Pentagon regards as the weapon that will dominate the world in the future. Aerospaceplane in China’s development of space-air bomber that can engage enemy anywhere in the world within an hour and destroy an entire aircraft carrier battle group within minutes. Anti-satellite (ASAT) weapons, anti-ASAT weapons, stealth aircrafts, drones, AEW&C, etc. The book gives detailed descriptions of China’s weapon development based on information mainly from Chinese sources that the author monitors closely. U.S. Must Not Be Beaten by China! China is not a democracy. Its political system cannot prevent the emergence of a despotic leader or stop such a leader when he begins to bring disasters to people. A few decades ago, Mao Zedong, the worst tyrant in world history did emerge and bring disasters to Chinese people. He wanted to fight a nuclear war to replace capitalism with communism but could not bring nuclear holocaust to world people as China was too weak and poor at that time. If a despot like Mao Zedong emerges when China has surpassed the US in military strength, world people will suffer the misery experienced by Chinese people in Mao era. China surpassing the US in GDP is not something to worry about as China has the heavy burden to satisfy its huge population, but China surpassing the US in military strength will be world people’s greatest concern if China remains an autocracy. US people are of much better quality than Chinese people. What they lack is a wise leader to adopt the correct strategy and diplomacy and the creative ways to use its resources in developing its military capabilities. I hope that with the emergence of a great leader, the US can put an end to its decline and remain number one in the world. China, US, space era strategy, air-sea battle, space-air bomber, arms race, weapon development, chan kai yee
View all posts by chankaiyee2 »
« Chinese state secrets revealed: Details of leaders’ families
China breaches and abuses WTO rules, USA says »