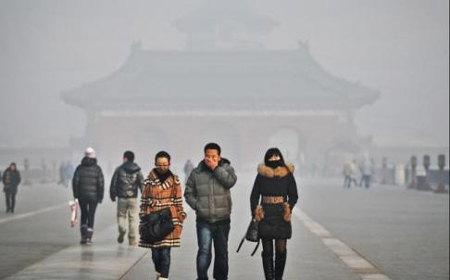 Smog obscures the Temple of Heaven in Beijing. The capital saw some of its worst air pollution in a decade. With fog making things worse, roads were closed and flights hit elsewhere. Photo: Xinhua

The capital saw some of its worst air pollution in a decade. With fog making things worse, roads were closed and flights hit elsewhere. Photo: Xinhua

Pollution levels off the scale in Beijing, and with no wind, conditions could get even worse

People across much of northern China were warned to stay indoors yesterday to avoid air polllution that, in the Beijing area area at least, was among the worst for a decade.

Thick smog that has blanketed a dozen provinces in the north, cente and east in recent weeks intensified, with environmental advocates describing it as the worst they could recall.

In Beijing, pollution readings by the local environmental watchdog, as well as the US embassy, blew past the upper limit of “hazardous” early yesterday afternoon and stayed there for the rest of the day.

US embassy pollution data published hourly on Twitter showed the level of health-threatening PM2.5 – or particles smaller than 2.5 microns – had reached 886 micrograms per cubic metre at 8pm. Its Air Quality Index, which includes PM2.5 and ozone, had surged past the maximum rating of 500 to 755, or “beyond index”.

With no wind forecast to bring more favourable conditions in the next three days, experts said the worst may be yet to come.

“It’s so awful that I find it really difficult to breathe,” said Zhou Rong , a Greenpeace campaigner in Beijing. “It’s the most polluted day I can remember.”

The Beijing Municipal Environmental Protection Bureau said its own figures showed PM2.5 levels had exceeded 700 micrograms per cubic metre since early afternoon. That pushed the Air Quality Index to its maximum of 500 for the first time since real-time air pollution updates began on New Year‘s Day.

Under the mainland’s newly revised standards, a level above 200 is considered heavy pollution and unhealthy to those with lung or heart diseases. Readings above 300 are deemed “hazardous for the entire population”.

State television and local media warned people to avoid going outdoors as much as possible, quoting forecasts that suggest winds will not arrive to clear the choking smog until Tuesday.

Beijing Children’s Hospital said heavy pollution was largely to blame for the number of children being treated for respiratory ailments hitting a five-year high in the past week, with more than 7,000 patients a day.

Exacerbated by heavy fog, pollution in Chengdu, Jinan, Wuhan, Xian, Zhengzhou and many other cities has worsened significantly in recent days. Visibility fell to less than 50 metres in many areas, forcing the closure of dozens of highways and the cancellation of dozens of flights.

Author of the book "Tiananmen's Tremendous Achievements" about how with the help of Tiananmen Protests, talented scholars with moral integrity seized power in the Party and state and brought prosperity to China. The second edition of the book will be published within a few days to mark the 25th anniversary of Tiananmen Protests All the parts in the first edition remain in the second edition with a few changes due to information available later and better understanding. There are also some changes for improvements of style. The new parts are Chapters 12-19 on events in China after the first edition was published: The fierce power struggle for succession between reformists and conservatives; Xi Jinping winning all elders’ support during his mysterious disappearance for 2 weeks in early September, 2012; and Xi Jinping Cyclone. Chan Kai Yee's new book: SPACE ERA STRATEGY: The Way China Beats The US An eye-opening book that tells the truth how the US is losing to China. The US is losing as it adopts the outdated strategy of Air-Sea Battle while China adopts the space era strategy to pursue integrated space and air capabilities: It is losing due to its diplomacy that has given rise to Russian-Chinese alliance. US outdated strategy has enabled China to catch up and surpass the US in key weapons: Hypersonic weapons (HGV) that Pentagon regards as the weapon that will dominate the world in the future. Aerospaceplane in China’s development of space-air bomber that can engage enemy anywhere in the world within an hour and destroy an entire aircraft carrier battle group within minutes. Anti-satellite (ASAT) weapons, anti-ASAT weapons, stealth aircrafts, drones, AEW&C, etc. The book gives detailed descriptions of China’s weapon development based on information mainly from Chinese sources that the author monitors closely. U.S. Must Not Be Beaten by China! China is not a democracy. Its political system cannot prevent the emergence of a despotic leader or stop such a leader when he begins to bring disasters to people. A few decades ago, Mao Zedong, the worst tyrant in world history did emerge and bring disasters to Chinese people. He wanted to fight a nuclear war to replace capitalism with communism but could not bring nuclear holocaust to world people as China was too weak and poor at that time. If a despot like Mao Zedong emerges when China has surpassed the US in military strength, world people will suffer the misery experienced by Chinese people in Mao era. China surpassing the US in GDP is not something to worry about as China has the heavy burden to satisfy its huge population, but China surpassing the US in military strength will be world people’s greatest concern if China remains an autocracy. US people are of much better quality than Chinese people. What they lack is a wise leader to adopt the correct strategy and diplomacy and the creative ways to use its resources in developing its military capabilities. I hope that with the emergence of a great leader, the US can put an end to its decline and remain number one in the world. China, US, space era strategy, air-sea battle, space-air bomber, arms race, weapon development, chan kai yee
View all posts by chankaiyee2 »
« Taiwan to expand Taiping wharf in South China Sea
True agenda of China publicly released – seven years ago! »

3 thoughts on “Northern China on health alert as smog worsens”