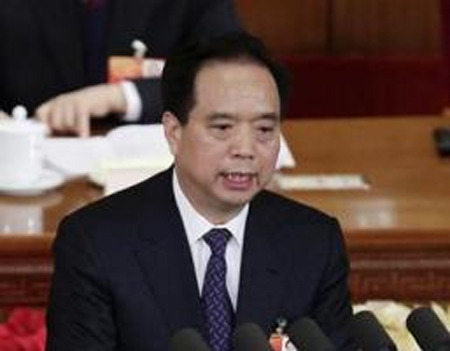 A senior Chinese official is under investigation, a Hong Kong newspaper reported at the weekend, in a case that could represent the first time a national political figure has been netted in China’s anti-corruption drive.

Li Jianguo, a member of the country’s elite Politburo and the vice chairman of the national rubber-stamp legislature, has not been charged with any offence.

The Hong Kong-based Ming Pao newspaper however reported that Li had checked into a Beijing military hospital due to “psychological stress” from the investigation.

A call to the National People’s Congress news department was not answered on Sunday.

If charges do result, Li would be the highest-ranking official snagged in an anti-corruption drive launched by the new party leadership.

Not all corruption investigations result in charges, and officials rumored to be under investigation often reappear in public in a sign that their case has been cleared.

Li, who is not a widely known political figure, was formerly secretary to Li Ruihuan, a powerful official throughout the 1990s. He is considered close to the Communist Youth League, the power base for outgoing Chinese president Hu Jintao, and was only named to the Politburo in November.

If charged, Li would be only the fourth member of the Politburo, a powerful grouping of only 25 senior Party members, to be toppled in a corruption scandal since 1995.

The anti-corruption drive has so far implicated mostly regional officials, including the deputy party boss of SichuanProvince, Li Chuncheng, who had for many years overseen development of the province’s prosperous capital, Chengdu.

A construction magnate has also been detained in that case.

Li is a common family name in China, and the three Lis are unrelated.

Author of the book "Tiananmen's Tremendous Achievements" about how with the help of Tiananmen Protests, talented scholars with moral integrity seized power in the Party and state and brought prosperity to China. The second edition of the book will be published within a few days to mark the 25th anniversary of Tiananmen Protests All the parts in the first edition remain in the second edition with a few changes due to information available later and better understanding. There are also some changes for improvements of style. The new parts are Chapters 12-19 on events in China after the first edition was published: The fierce power struggle for succession between reformists and conservatives; Xi Jinping winning all elders’ support during his mysterious disappearance for 2 weeks in early September, 2012; and Xi Jinping Cyclone. Chan Kai Yee's new book: SPACE ERA STRATEGY: The Way China Beats The US An eye-opening book that tells the truth how the US is losing to China. The US is losing as it adopts the outdated strategy of Air-Sea Battle while China adopts the space era strategy to pursue integrated space and air capabilities: It is losing due to its diplomacy that has given rise to Russian-Chinese alliance. US outdated strategy has enabled China to catch up and surpass the US in key weapons: Hypersonic weapons (HGV) that Pentagon regards as the weapon that will dominate the world in the future. Aerospaceplane in China’s development of space-air bomber that can engage enemy anywhere in the world within an hour and destroy an entire aircraft carrier battle group within minutes. Anti-satellite (ASAT) weapons, anti-ASAT weapons, stealth aircrafts, drones, AEW&C, etc. The book gives detailed descriptions of China’s weapon development based on information mainly from Chinese sources that the author monitors closely. U.S. Must Not Be Beaten by China! China is not a democracy. Its political system cannot prevent the emergence of a despotic leader or stop such a leader when he begins to bring disasters to people. A few decades ago, Mao Zedong, the worst tyrant in world history did emerge and bring disasters to Chinese people. He wanted to fight a nuclear war to replace capitalism with communism but could not bring nuclear holocaust to world people as China was too weak and poor at that time. If a despot like Mao Zedong emerges when China has surpassed the US in military strength, world people will suffer the misery experienced by Chinese people in Mao era. China surpassing the US in GDP is not something to worry about as China has the heavy burden to satisfy its huge population, but China surpassing the US in military strength will be world people’s greatest concern if China remains an autocracy. US people are of much better quality than Chinese people. What they lack is a wise leader to adopt the correct strategy and diplomacy and the creative ways to use its resources in developing its military capabilities. I hope that with the emergence of a great leader, the US can put an end to its decline and remain number one in the world. China, US, space era strategy, air-sea battle, space-air bomber, arms race, weapon development, chan kai yee
View all posts by chankaiyee2 »
« Beijing reveals the secret locations of China’s armies
China test flies heavy air force freight plane »