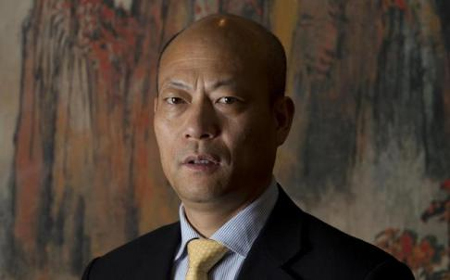 Leery of product safety in China, Zhu Zhangjin is urging farmers to invest abroad like he has.

Zhu Zhangjin calls himself a farmer, but he has little time or love for mainland farm goods. Nor is he afraid to speak his mind on the matter.

Zhu also happens to be party secretary of Huafeng village in Zhejiang province, and also chairman of Kasen International Holdings, one of China’s biggest leather producers.

While attending the National People’s Congress as a member of the Zhejiang delegation, he upset more than a few people dining near him by repeatedly pointing to their food and saying “don’t eat this”, or “don’t touch that”.

To show that he was neither lying nor exaggerating about the state of the mainland’s food safety, he brought with him more than 300 samples of banned chemicals and contaminated food products that he had collected from farmers and producers in recent years.

Considered by his peers as a man of action, Zhu has quietly bought more than 200,000 hectares of farmland overseas since 2008 in countries such as Brazil and Australia, to ensure product safety, lower production costs and better profits.

But, he warned, they would face many hurdles along the way. Foremost was money: to make an overseas plantation profitable, a farmer must have enough money to buy and run one or more large farms, or the production output would be too small to be profitable.

In Brazil, for instance, the cost of translation services alone for a Chinese farmer could be 200,000 yuan (HK$32,000) a year, while farm labour cost two to three times that in China. “Few Chinese farmers can afford such an investment,” Zhu said.

Then there are political roadblocks. African nations like Tanzania, Angola and Zimbabwe have plenty of farmland in favourable climates, which appeals to Chinese farmers. But there is an underlying fear there of insurgents, employee kidnappings or simply frequent changes to investment regulations. Any of these could spell disaster for a farm overnight.

“To some extent, this is our own fault,” Zhu said, explaining that some foreigners get the impression that China is trying to colonise their country with an abundance of money and a huge labour pool.

Brazil, for instance, passed a law in 2010 banning foreigners from buying land. “It mainly targets the Chinese,” Zhu said.

While some countries have put up barriers to farm purchases by foreigners, Chinese investors can still buy land with the help of local agents, who avoid raising attention by buying a series of smaller plots.

Despite such odds, a growing number of Chinese farmers were using their savings abroad as the domestic farming environment deteriorates and production costs rise, Zhu said.

China has about 120 million hectares of farmland, most of which have been used continuously for decades. Unlike other countries such as Japan, Bejing did not allow farmland to lie fallow every few years, he said.

Such relentless overuse has exhausted the land. “Just like a man, a farm needs regular breaks or it will become overworked,” Zhu said. If the soil is not given time to recover its fertility, productivity declines, resulting in farmers using more fertilisers and pesticides to increase yield.

Polluted soil and water from factories were making it harder to find clean, productive farmland on the mainland, Zhu said. Current agricultural policies have not improved the quantity or quality of output, either. To curb inflation and quell complaints about rising food prices, the government keeps prices of farm produce artificially low.

Farmers are also heavily subsidised, usually on the size of their farm holdings. However, many farmers lease their land to agricultural firms while pocketing the government payments.

The prices of farmland have also been rising. “Two years’ worth of rent for a farm in China could buy me the same amount of land in Brazil,” Zhu said.

Meanwhile, China faced entrenched food safety problems, Zhu said. For instance, livestock, living in often unhygienic conditions, become more susceptible to disease. The disposal of their waste – and carcasses when they die – is a problem that surfaced in alarming fashion last week when thousands of dead pigs were found in the Huangpu River.

Author of the book "Tiananmen's Tremendous Achievements" about how with the help of Tiananmen Protests, talented scholars with moral integrity seized power in the Party and state and brought prosperity to China. The second edition of the book will be published within a few days to mark the 25th anniversary of Tiananmen Protests All the parts in the first edition remain in the second edition with a few changes due to information available later and better understanding. There are also some changes for improvements of style. The new parts are Chapters 12-19 on events in China after the first edition was published: The fierce power struggle for succession between reformists and conservatives; Xi Jinping winning all elders’ support during his mysterious disappearance for 2 weeks in early September, 2012; and Xi Jinping Cyclone. Chan Kai Yee's new book: SPACE ERA STRATEGY: The Way China Beats The US An eye-opening book that tells the truth how the US is losing to China. The US is losing as it adopts the outdated strategy of Air-Sea Battle while China adopts the space era strategy to pursue integrated space and air capabilities: It is losing due to its diplomacy that has given rise to Russian-Chinese alliance. US outdated strategy has enabled China to catch up and surpass the US in key weapons: Hypersonic weapons (HGV) that Pentagon regards as the weapon that will dominate the world in the future. Aerospaceplane in China’s development of space-air bomber that can engage enemy anywhere in the world within an hour and destroy an entire aircraft carrier battle group within minutes. Anti-satellite (ASAT) weapons, anti-ASAT weapons, stealth aircrafts, drones, AEW&C, etc. The book gives detailed descriptions of China’s weapon development based on information mainly from Chinese sources that the author monitors closely. U.S. Must Not Be Beaten by China! China is not a democracy. Its political system cannot prevent the emergence of a despotic leader or stop such a leader when he begins to bring disasters to people. A few decades ago, Mao Zedong, the worst tyrant in world history did emerge and bring disasters to Chinese people. He wanted to fight a nuclear war to replace capitalism with communism but could not bring nuclear holocaust to world people as China was too weak and poor at that time. If a despot like Mao Zedong emerges when China has surpassed the US in military strength, world people will suffer the misery experienced by Chinese people in Mao era. China surpassing the US in GDP is not something to worry about as China has the heavy burden to satisfy its huge population, but China surpassing the US in military strength will be world people’s greatest concern if China remains an autocracy. US people are of much better quality than Chinese people. What they lack is a wise leader to adopt the correct strategy and diplomacy and the creative ways to use its resources in developing its military capabilities. I hope that with the emergence of a great leader, the US can put an end to its decline and remain number one in the world. China, US, space era strategy, air-sea battle, space-air bomber, arms race, weapon development, chan kai yee
View all posts by chankaiyee2 »
« Construction of China’s tallest building stopped because of corrosive salt in concrete
‘Post-Communist’ Russia and China remain remarkably the same »