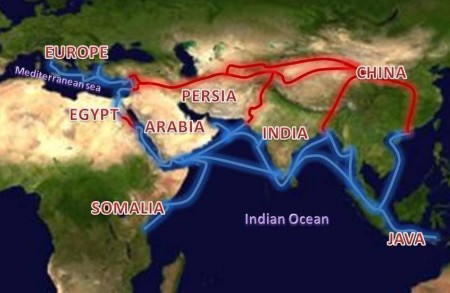 After enjoying a history of about 1600 years, the Silk Road had lost out to the Southern Ocean Corridor connecting Europe and Asia. But now there are signs that the old Silk Road is being revived.

The Silk Road refers to the historical network of trading routes that connected Asia with the Middle East, North Africa, and Europe. Actually there were two major Silk Roads. The Northern Silk Road began from the present day Xian in China, which branched further west into two routes which converged in Kashgar, in what is now the largely Muslim Xinjiang province of China, before continuing on.

There was also the less well-known Southwestern Silk Road (SSR) which began in the Yunnan province of China. Bin Yang, a historian at the National University of Singapore, has noted that the SSR had four sections: the Sichuan-Yunnan-Burma-India Road which began in Chengdu, the capital of Sichuan, and then proceeded to Kunming and Dali in Yunnan province before entering Burma and India, the Yunnan-Vietnam Road, the Yunnan-Laos-Thailand-Cambodia Road and the Yunnan-Tibet Road. DP Singhal has, in addition, alluded to trade over two overland routes through Nepal and Tibet to China.

The Silk Route saw its zenith during the Mongol Empire around the middle of the 13th century when political stability allowed more trade in the region. There were significant complementaries in trade: Merchandise that did not seem valuable to the Mongols – such as silk, lacquer-ware  porcelain – was often seen as valuable by the west and the Mongols in turn received large amounts of luxurious goods from Europe and dates, saffron, and pistachio nuts from Persia. It was during this time that Marco Polo travelled the Silk Road to China.

Trade on the Silk Road started to decline after the collapse of the Mongol Empire in the 14th century. The isolationist foreign policies of the Ming and the later Qing dynasties also did not help. The Europeans, therefore, started to reach the prosperous Chinese Empire through the sea route.

The sharp lowering of shipping costs which began with the invention of the steam engine during the Industrial Revolution also led to further increase in Europe’s maritime trade with Asia on the so-called Southern Ocean Corridor. This Corridor linked the Mediterranean in a trade route which continued through South Asia, the Straits of Malacca which straddled the old regional trading hub of the Malacca Sultanate, and up the East Asian coast to Korea and Japan.

Now things are starting to change and the case for reviving land connectivity in Asia or the Silk Road has strengthened.

Firstly, Maritime Asia, defined as the dynamic north-south coastal region from Korea to Indonesia, is starting to become more continental with expanding networks of roads, railways, and pipelines. This is most obvious in China where sharp increase in real wages in the coastal regions is leading to the relocation of industries to the interior of the country where labour is cheaper.

Under its “Go West” policy of 2005, China has identified a number of “bridge heads” for sub-regional connectivity such as the Yunnan province for the Greater Mekong Sub-region, and the Xinjiang province for cooperation with Central Asia. The Qinghai-Tibet Railway will reach Xigaste in Tibet this year, and is to be extended soon to reach the border with Nepal. The Beijing-Lhasa expressway has also been completed up to Xining, the halfway point.

Secondly, the encouraging but gradual political and economic reforms in Myanmar – as Burma is now known and is a node between South Asia and East Asia – has also provided a fillip for land connectivity. Both China and India are actively involved. Chinese strategists write about the “Malacca Dilemma” with the Strait being a natural choke point and the need to find an alternative route. In May, an 800 km gas pipeline from Kyauphyu, a port in Myanmar, to Kunming will be working. Next year, an oil pipeline will open along the same route. Road and railway will also follow. Work on the Kaladan Multimodal Project seeking to connect Kolkota in India with Sittwe in Myanmar by sea and then the North East region of India by river and road transport is ongoing.

Thirdly, to realist the potential of dynamic complementaries associated with the newer theories of trade pioneered by some scholars there is a need to develop different types of service links. Under the traditional theory of comparative advantage, developing countries produced labour intensive goods which they then exchanged for relatively capital and skill intensive goods produced by the more advanced countries. All separate tasks involved in producing a good, however, were done entirely in one country.

Under the newer theories, production is sliced and diced into separate fragments and production of parts and components are located in production blocks around the world which are linked by efficient service links. The type of service link required depends on the sector being considered.

While for bulky items, sea freight is still the most cost effective way of moving goods, for less bulky parts and components, road transportation could be quicker especially among neighbouring countries. For perishable items, air transport might be necessary.

A number of regional efforts are also being made to revive the Silk Road. The Master Plan on ASEAN Connectivity of 2010 seeks to promote physical, institutional, and people-to-people connectivity among its 10 member countries. The Master Plan also emphasises the importance of ASEAN’s connectivity with neighbouring countries, such as India and China and the other members of the East Asia Summit (EAS).

In response to the request of EAS, the Economic Research Institute for ASEAN and East Asia (ERIA) has come up with two projects for ASEAN-India Connectivity, namely, the Mekong-India Economic Corridor and the Trilateral Highway connecting India and Myanmar with Thailand.

What has been lacking so far is effort to promote the China-ASEAN-South Asia Connectivity by reviving the Southern Silk Road. The ERIA should consider a Yunnan-Myanmar-India-Nepal-Tibet-Yunnan Economic Corridor or a Circular Economic Corridor in Asia and sensitise the project concept and its feasibility.

Such a project would lead to a win-win situation for the countries concerned especially to Nepal which, as a land-locked country, has the potential to be a “land bridge” between India and China. Other “land bridges” in Asia that have benefited significantly from regional connectivity are Laos and Mongolia.