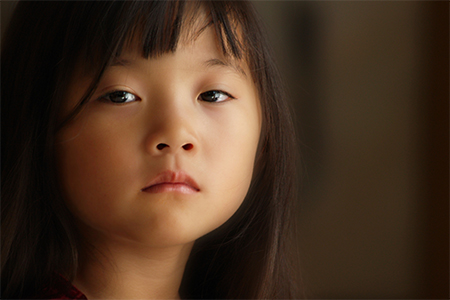 Suddenly all kinds of people in China are offering to sleep with the headmaster.

The unusual outpouring is in response to a recent spate of sex abuse cases, including that of a school principal who spent the night in a hotel room with four underage girls. Artists, activists, university students and police officers are photographing themselves — some nude and provocatively posed, some angry and menacing — with the message:

“Principal, get a room with me. Leave the young students alone.”

The online campaign — mixing performance art, satire and outrage — has tapped into public anger over sexual abuse against children. It’s a problem in China partly because of a lack of sex education and partly because Chinese society has become unmoored from traditional strictures after decades of rapid economic change and social change.

Attitudes toward sex have become more lax, especially noticeable among powerful officials, often found to be cavorting with very young mistresses and prostitutes. Children are prone to the abuse because they have not been adequately prepared, and can be easily intimidated by teachers and other authority figures.

“Schools and parents have failed to instill in our children the sense of rights and to teach them how to protect themselves,” Xiong Bingqi, a deputy director of the Beijing-based education think tank 21st Century Education Research Institute. “If the children know about their rights, know they can call police if they are sexually assaulted and have the assaulters punished, it will sure deter the criminals.”

Recent sex abuse cases against children that have become public should be a wake-up call for Chinese families and schools, Xiong said, noting they may only be a tip of the iceberg.

“The students may not know they have been sexually abused,” Xiong said. “Or if they know, they don’t tell their parents. Sometimes, schools settle those cases without telling the police.”

In a recent survey by Beijing News, 37.4 percent of the respondents said they do not know how to teach their children to protect themselves from sexual abuse.

The national debate on the problem began in early May, when a primary school principal was caught spending a night with four schoolgirls — all under the age of 14 — in a hotel room in southern China’s Hainan province. Chen Zaipeng, the principal, has been fired and charged with rape.

Members of the public reacted with astonishment to the high-profile case, and have been reading with fury as at least seven more cases of sexual abuse by school teachers or employees against young girls have come to light over the past three weeks from different parts of China. Some victims were as young as 8.

In the past several years, there have been occasional reports of government officials hiring young girls as prostitutes. The cases are typically handled as prostitution, even when the girls are underage. Critics have demanded such culprits be prosecuted with the crime of raping children, which can carry harsher punishments.

China’s Supreme People’s Court this week vowed to crack down on crimes against children. The Education Ministry has demanded that sex criminals must be “firmly” cleaned out from the teaching staff and that those who help with cover-ups must be prosecuted. And the All-China Women’s Federation has called for severe punishment in all crimes against girls.

The public, however, has found an unconventional way of speaking up.

Late last month, Ye Haiyan, a feminist and advocate for the rights of sex workers, went to Chen’s former elementary school to lend support to his alleged victims. There, she held up a large piece of paper offering to “get a room” with Chen and telling him to leave the students alone, and gave a contact number, which was for China’s rights hotline for women and children.

Her offer prompted many others to follow suit. One is Beijing-based poet Wang Zang, who last Wednesday uploaded naked photos of himself with his back scribbled with the offer. In one photo, Wang holds a children’s toy in one hand and a liquor bottle in the other.

“I am protesting the frequent criminal acts of school sex abuse against young students,” Wang said. “And I also want to raise the public awareness in protecting the girls.”

Wang said he believes the recent cases are only a small part of the problem because many cases have been covered up by powerful people. Corruption in the education system has put unfit teachers in classrooms, and China’s laws have failed to adequately prosecute sexual crimes against children, Wang said.

Sociologist Li Yinhe sees the offers as a public statement. “I think it’s a way for people to express their anger,” she said. “It is also a kind of black humor.”

An editorial in Beijing News said the ridicule has a serious message: “In each and every ‘get a room with me’ call, you should hear the public anxiety of saving our children.”

General Manager at Craig Hill Training Services * Get an Australian diploma by studying in your own country * Get an Australian diploma using your overseas study and work experience * Diplomas can be used for work or study in Australia and other countries. * For more information go to www.craighill.net
View all posts by Craig Hill »
« China’s President ‘lacks wisdom and courage’ says state owned magazine
China not disputing Japan’s sovereignty over Okinawa »