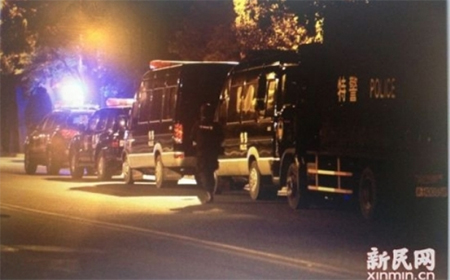 Police and SWAT vehicles seen parked along a road near the scene of the murders. Photo: SCMP Pictures

A 62-year-old employee at a private chemical factory in Shanghai killed four colleagues, a taxi driver and a sentry at a local military compound on Saturday night in a rare shooting spree that shocked China’s largest city and saw parts of it sealed off in a large police operation.

The man, identified only by his last name Fan, was believed to have killed a colleague, surnamed Zhang, with “tools” in the factory in Baoshan, Shanghai late on Saturday afternoon after an argument over “economic disputes,” local newspaper Xinmin Evening News reported on its website.

After the alleged murder, Fan retrieved a shotgun he had “illegally stashed”, took a unlicensed taxi and fled to Zhoupu, in Shanghai’s Pudong district. The drive took the alleged gunman some 50 kilometres, crossing the city from north to south. He then shot and killed the driver of the taxi with his shotgun, according to the website, xinmin.cn.

Fan then allegedly drove the stolen taxi back to Baoshan, and killed a military guard posted at the gate of a local military compound with his shotgun, and took the guard’s gun as well. He proceeded to drive back to his factory, the scene of the first killing of the night, and shot three more colleagues dead, the xinmin.cn report said. The victims included the boss of the factory, identified by last name Li.

Policemen patrolling the factory, presumably there after reports of the first murder, overpowered Fan after the last three shootings, and retrieved both guns at around 11.15pm, the website reported.

Witnesses saw about 10 police vehicles parked on a street near the factory, the scene of at least four of the shootings, as policemen and special police officers cordoned off the street. Police questioned every passing motorist before letting them go, it said.

Author of the book "Tiananmen's Tremendous Achievements" about how with the help of Tiananmen Protests, talented scholars with moral integrity seized power in the Party and state and brought prosperity to China. The second edition of the book will be published within a few days to mark the 25th anniversary of Tiananmen Protests All the parts in the first edition remain in the second edition with a few changes due to information available later and better understanding. There are also some changes for improvements of style. The new parts are Chapters 12-19 on events in China after the first edition was published: The fierce power struggle for succession between reformists and conservatives; Xi Jinping winning all elders’ support during his mysterious disappearance for 2 weeks in early September, 2012; and Xi Jinping Cyclone. Chan Kai Yee's new book: SPACE ERA STRATEGY: The Way China Beats The US An eye-opening book that tells the truth how the US is losing to China. The US is losing as it adopts the outdated strategy of Air-Sea Battle while China adopts the space era strategy to pursue integrated space and air capabilities: It is losing due to its diplomacy that has given rise to Russian-Chinese alliance. US outdated strategy has enabled China to catch up and surpass the US in key weapons: Hypersonic weapons (HGV) that Pentagon regards as the weapon that will dominate the world in the future. Aerospaceplane in China’s development of space-air bomber that can engage enemy anywhere in the world within an hour and destroy an entire aircraft carrier battle group within minutes. Anti-satellite (ASAT) weapons, anti-ASAT weapons, stealth aircrafts, drones, AEW&C, etc. The book gives detailed descriptions of China’s weapon development based on information mainly from Chinese sources that the author monitors closely. U.S. Must Not Be Beaten by China! China is not a democracy. Its political system cannot prevent the emergence of a despotic leader or stop such a leader when he begins to bring disasters to people. A few decades ago, Mao Zedong, the worst tyrant in world history did emerge and bring disasters to Chinese people. He wanted to fight a nuclear war to replace capitalism with communism but could not bring nuclear holocaust to world people as China was too weak and poor at that time. If a despot like Mao Zedong emerges when China has surpassed the US in military strength, world people will suffer the misery experienced by Chinese people in Mao era. China surpassing the US in GDP is not something to worry about as China has the heavy burden to satisfy its huge population, but China surpassing the US in military strength will be world people’s greatest concern if China remains an autocracy. US people are of much better quality than Chinese people. What they lack is a wise leader to adopt the correct strategy and diplomacy and the creative ways to use its resources in developing its military capabilities. I hope that with the emergence of a great leader, the US can put an end to its decline and remain number one in the world. China, US, space era strategy, air-sea battle, space-air bomber, arms race, weapon development, chan kai yee
View all posts by chankaiyee2 »
« South China Sea dispute: lucky China, unlucky Philippines
China cuts CO2 emissions »