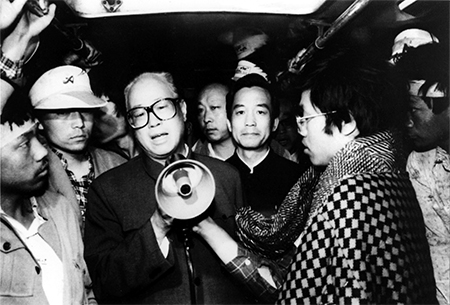 On 19 May 1989, Chinese Communist Party Secretary General Zhao Ziyang picked up a bullhorn and urged student demonstrators to end their hunger strike against the Chinese government in the name of peace and national stability. This was his last public appearance

On June 24 1989, a Saturday, Zhao Ziyang was formally ousted as General Secretary of the Chinese Communist Party weeks after voicing sympathy for student demonstrators at Tiananmen Square.

Jiang Zemin replaced him, and Zhao spent the rest of his life under house arrest. His removal from power was “effectively a coup,” according to American diplomatic officer Raymond Burghardt, who was chief political officer in Beijing at the time.

During his 16-year confinement, Zhao was able to clandestinely record his memoirs on 30 one-hour cassette tapes. Recorded over his children’s music and Peking Opera tapes, Zhao numbered each one with faint pencil before passing them to trusted friends to be smuggled out in separate batches under the nose of his captors. The full contents, including audio clips, were published in Prisoner of the State: The Secret Journal of Zhao Ziyang on 19 May 2009, more than four years after his death.

Zhao, a reformist who pleaded with China’s paramount leader Deng Xiaoping to take a softer line with the protesting students, described the killings as a “tragedy”. Recalling the moment he finally knew his efforts to prevent bloodshed were in vain, Zhao wrote: “On the night of June 3, while sitting in the courtyard with my family, I heard intense gunfire. A tragedy to shock the world had not been averted, and was happening after all.”

Among the key passages of the book is Zhao’s account of the meeting on May 17 at the house of Deng Xiaoping at which it was decided – despite Zhao’s vigorous representations – to impose martial law and clear the square by force:

I had no other choice but to express my views to Deng personally, in a face-to-face meeting. Since I had asked for a personal meeting with Deng, only to have Deng call for a full Standing Committee meeting at his home, I realized that things had already taken a bad turn.

I expressed my views roughly as follows: “The situation with the student demonstrations has worsened, and has grown extremely grave. Students, teachers, journalists, scholars and even some government staff have taken to the streets in protest. Today there were approximately 300,000 to 400,000 people. Quite a large number of workers and peasants are also sympathetic.

Besides the hot issues of corruption and government transparency, the main impetus for all these different social groups is that they want an explanation for how the Party and the government can be so coldhearted in the face of hunger-striking students, doing nothing to try to save them…

If the hunger strike continues and some people die, it will be like gasoline poured over a flame. If we take a confrontational stance with the masses, a dangerous situation could ensue in which we lose complete control.”

While I was expressing my view, Deng appeared very impatient and displeased.

In the end, Deng Xiaoping made the final decision. He said: “Since there is no way to back down without the situation spiralling completely out of control, the decision is to move troops into Beijing and impose martial law”.

When the meeting adjourned, Zhao recalls that he left immediately, not pausing to talk further with his colleagues. “At that moment, I was extremely upset. I told myself that no matter what, I refused to become the General Secretary who mobilized the military to crack down on the students.” But Zhao accepted the likely consequences:

By insisting on my view of the student demonstrations and refusing to accept the decision to crack down with force, I knew what the consequences would be and what treatment I would receive. Mentally, I was fully prepared, I knew that if I persistently upheld my view, I would ultimately be compelled to step down.

If I wanted to keep my position, or give up my post in some face-saving way, I would have to give up my viewpoint and conform. If I persisted, then I had to be prepared to step down.

I am a Buddhist.
View all posts by Bruce »
« Australia sees China and US both central to future
Russia sells China 100 Su-35 fighter jets »