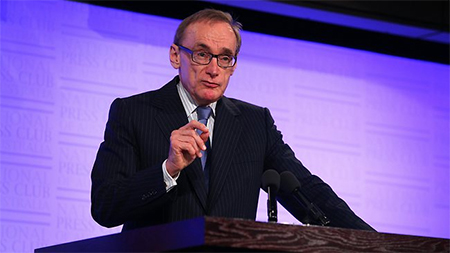 Australia’s Foreign Minister Bob Carr has urged China to press ahead with legal and political reform as the nation plays an increasingly important role in the world.

In a speech to the influential Asia Society in Hong Kong, Senator Carr said Australia believed China had to improve its human rights track record, which is considered poor by world standards.

China is now Australia’s largest trading partner, with trade between the two nations worth at least $US130 billion a year.

However, Senator Carr said Australia’s relationship with China had to extend beyond business and economic ties.

“In Australia, we believe that a China that better respects and protects human rights that fully adheres to its human rights commitments will be a stronger China,” he said.

“The rights of individuals and their protection under the law will not weaken the Chinese nation but will strengthen it.

“Chinese citizens want improvements in their daily lives and hold their governments to account.”

Senator Carr said China was now undertaking a “charm offensive” as it becomes a greater player in the world economy and political system.

General Manager at Craig Hill Training Services * Get an Australian diploma by studying in your own country * Get an Australian diploma using your overseas study and work experience * Diplomas can be used for work or study in Australia and other countries. * For more information go to www.craighill.net
View all posts by Craig Hill »
« China charges Bo Xilai with corruption, paves way for trial
China risks following Japan into economic coma »