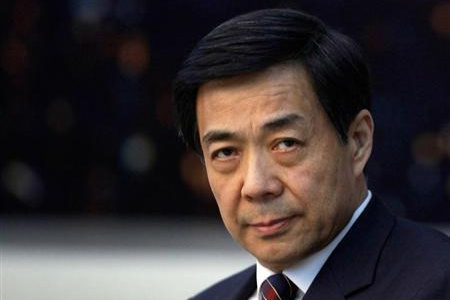 The trial of disgraced senior Chinese politician Bo Xilai will start on Thursday, when he will face charges of bribery, corruption and abuse of power in China’s most divisive and dramatic case in decades.

The long-awaited trial of Bo, 64, a “princeling” son of a late vice premier who is still popular with conservatives and the disaffected, will be the country’s highest-profile hearing since the 1976 downfall of Mao Zedong‘s widow, Jiang Qing, and her Gang of Four at the end of the Cultural Revolution.

Bo’s wife, Gu Kailai, and his estranged police chief, Wang Lijun, have both been jailed over the scandal stemming from the November 2011 murder of British businessman Neil Heywood in the southwestern city of Chongqing, where Bo was Communist Party boss.

Bo’s trial will open at the Intermediate People’s Court in Jinan, capital of the eastern coastal province of Shandong, at 8:30 a.m. (0030 GMT) on Thursday, Xinhua said in a terse report on Sunday. It gave no further details.

A court spokeswoman confirmed the report, but would not say how long the trial would last, though it could be just a day.

It is almost certain Bo will be convicted as China’s prosecutors and judges are controlled by the ruling Communist Party, and he could theoretically be sentenced to death.

“I hope he does not get the death penalty, as this is a method of punishment we should be using less off. But I would expect a strong punishment,” said Li Zhuang, a lawyer and prominent opponent of Bo during his time as Chongqing party boss.

The Wall Street Journal said that Bo’s wife would be the key witness for the prosecution.

But a source familiar with the situation, who declined to be identified citing the sensitivity of the matter, said Gu would not testify.

It is not clear if she has provided any evidence already to the prosecution.

How Bo’s case is handled will be a test of newly installed President Xi Jinping‘s steel in the battle against deeply ingrained corruption and also show how he has been able to stamp his authority on the party, which he leads.

Xi has vowed to fight both “tigers” and “flies” – in other words people at every level of the party – as he combats graft so serious that he has warned it threatens the party’s very survival.

However, his campaign has so far netted precious few “tigers”, and in any case the Bo scandal pre-dates Xi’s time as national leader.

Bo, a former commerce minister, used his post as party boss of Chongqing to cast the sprawling, haze-covered municipality into a showcase for his mix of populist policies and bold spending plans that won support from leftists yearning for a charismatic leader.

Bo’s former police chief, Wang, had spearheaded a controversial drive against organized crime, a prominent plank in Bo’s barely concealed campaign to join the top ranks of the party.

Censors appeared to relax the normal tight controls on discussing the trial on China’s Twitter-like Sina Weibo microblogging service, though opinions were split, reflecting the deep divisions the case has exposed.

“I don’t really believe anything about this case, and I don’t know if we’ll ever get to the bottom of it,” wrote one user.

“He had ruthless ambition like Hitler and had a talent for co-opting public opinion,” wrote another.

The trial will almost certainly be conducted behind closed doors, which will play into the suspicions of many in China that Bo is simply a victim of elite infighting.

Bao Tong, the most senior government official jailed over the 1989 Tiananmen Square pro-democracy protests, urged the government to grant Bo an open and fair trial, saying it was necessary to prevent the assumption that his case is “a product of a political struggle”.

Bao also criticized the authorities for detaining a supporter of Bo and preventing a family-appointed lawyer from representing Bo.

“This means that justice is not impartial, justice is only playacting,” Bao told Reuters earlier this month. “Now the program has been prepared, the director is there, the actors have rehearsed. We’re just waiting for the performance.”

Author of the book "Tiananmen's Tremendous Achievements" about how with the help of Tiananmen Protests, talented scholars with moral integrity seized power in the Party and state and brought prosperity to China. The second edition of the book will be published within a few days to mark the 25th anniversary of Tiananmen Protests All the parts in the first edition remain in the second edition with a few changes due to information available later and better understanding. There are also some changes for improvements of style. The new parts are Chapters 12-19 on events in China after the first edition was published: The fierce power struggle for succession between reformists and conservatives; Xi Jinping winning all elders’ support during his mysterious disappearance for 2 weeks in early September, 2012; and Xi Jinping Cyclone. Chan Kai Yee's new book: SPACE ERA STRATEGY: The Way China Beats The US An eye-opening book that tells the truth how the US is losing to China. The US is losing as it adopts the outdated strategy of Air-Sea Battle while China adopts the space era strategy to pursue integrated space and air capabilities: It is losing due to its diplomacy that has given rise to Russian-Chinese alliance. US outdated strategy has enabled China to catch up and surpass the US in key weapons: Hypersonic weapons (HGV) that Pentagon regards as the weapon that will dominate the world in the future. Aerospaceplane in China’s development of space-air bomber that can engage enemy anywhere in the world within an hour and destroy an entire aircraft carrier battle group within minutes. Anti-satellite (ASAT) weapons, anti-ASAT weapons, stealth aircrafts, drones, AEW&C, etc. The book gives detailed descriptions of China’s weapon development based on information mainly from Chinese sources that the author monitors closely. U.S. Must Not Be Beaten by China! China is not a democracy. Its political system cannot prevent the emergence of a despotic leader or stop such a leader when he begins to bring disasters to people. A few decades ago, Mao Zedong, the worst tyrant in world history did emerge and bring disasters to Chinese people. He wanted to fight a nuclear war to replace capitalism with communism but could not bring nuclear holocaust to world people as China was too weak and poor at that time. If a despot like Mao Zedong emerges when China has surpassed the US in military strength, world people will suffer the misery experienced by Chinese people in Mao era. China surpassing the US in GDP is not something to worry about as China has the heavy burden to satisfy its huge population, but China surpassing the US in military strength will be world people’s greatest concern if China remains an autocracy. US people are of much better quality than Chinese people. What they lack is a wise leader to adopt the correct strategy and diplomacy and the creative ways to use its resources in developing its military capabilities. I hope that with the emergence of a great leader, the US can put an end to its decline and remain number one in the world. China, US, space era strategy, air-sea battle, space-air bomber, arms race, weapon development, chan kai yee
View all posts by chankaiyee2 »
« Chinese zoo disguises dog as lion
China’s Xi Jinping disappoints world by promoting Maoist revival »