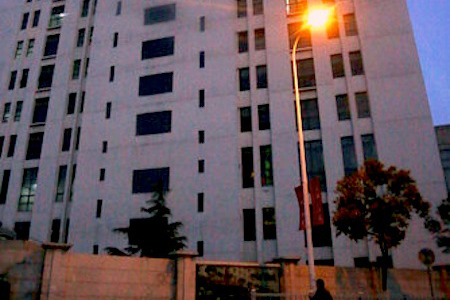 For almost two years, hackers based in Shanghai went after one foreign defense contractor after another, at least 20 in all. Their target, according to an American cybersecurity company that monitored the attacks, was the technology behind the United States’ clear lead in military drones.

“I believe this is the largest campaign we’ve seen that has been focused on drone technology,” said Darien Kindlund, manager of threat intelligence at the company, FireEye, based in California. “It seems to align pretty well with the focus of the Chinese government to build up their own drone technology capabilities.”

The hacking operation, conducted by a group called “Comment Crew,” was one of the most recent signs of the ambitions of China’s drone development program. The government and military are striving to put China at the forefront of drone manufacturing, for their own use and for export, and have made an all-out push to gather domestic and international technology to support the program.

Foreign Ministry officials have said China does not sanction hacking, and is itself a victim, but another American cybersecurity company has tracked members of Comment Crew to a building of the People’s Liberation Army outside Shanghai.

China is now dispatching its own drones into potential combat arenas. Every major arms manufacturer in China has a research center devoted to drones, according to Chinese and foreign military analysts. Those companies have shown off dozens of models to potential foreign buyers at international air shows.

Chinese officials this month sent a drone near disputed islands administered by Japan; debated using a weaponized drone last year to kill a criminal suspect in Myanmar; and sold homemade drones resembling the Predator, an American model, to other countries for less than a million dollars each. Meanwhile, online photographs reveal a stealth combat drone, the Lijian, or Stealth Sword, in a runway test in May.

Military analysts say China has long tried to replicate foreign drone designs. Some Chinese drones appearing at recent air shows have closely resembled foreign ones. Ian M. Easton, a military analyst at the Project 2049 Institute in Virginia, said cyberespionage was one tool in an extensive effort over years to purchase or develop drones domestically using all available technology, foreign and domestic.

Chinese engineers and officials have done reverse engineering, studied open source material and debriefed American drone experts who attend conferences and other meetings in China. “This can save them years of design work and mistakes,” Mr. Easton said.

The Chinese military has not released statistics on the size of its drone fleet, but a Taiwan Defense Ministry report said that as of mid-2011, the Chinese Air Force alone had more than 280 drone units, and analysts say the other branches have thousands, which means China’s fleet count is second only to the 7,000 or so of the United States. “The military significance of China’s move into unmanned systems is alarming,” said a 2012 report by the Defense Science Board, a Pentagon advisory committee.

China’s domestic security apparatus, whose $124 billion official budget this year is larger than that of the military, is also keenly interested in drones, which raises questions about the potential use of drones for surveillance and possibly even attacks inside China, including in restive areas of Xinjiang and Tibet. Drone technology conferences here are attended by both military and domestic security officials. An international conference on nonmilitary drones is scheduled to take place in Beijing from Sept. 25 to 28.

A signal moment in China’s drone use came on Sept. 9, when the navy sent a surveillance drone near the disputed Diaoyu Islands, which Japan administers and calls the Senkakus. Japanese interceptor jets scrambled to confront it. This was the first time China had ever deployed a drone over the East China Sea. The Chinese Defense Ministry said “regular drills” had taken place “at relevant areas in the East China Sea, which conform to relevant international laws and practices.”

The drone appeared to be a BZK-005, a long-range aircraft used by the Chinese Navy that made its public debut in 2006 at China’s air show in Zhuhai, said an American official.

Mr. Easton said deploying the drone near disputed waters and islands “was very much a first” for China and had caught Japanese officials off guard.

“I think this is really just the beginning of a much broader trend we’re going to see — for China to increase its ability to monitor the East China Sea and the Western Pacific, beyond the Philippines, and to increase the operational envelope of their strike capabilities,” he said.

The Chinese military, with its constant focus on potential war over Taiwan and an eye on China’s growing territorial disputes, is at the vanguard of preparing drones for use in maritime situations. That is unlike the United States, which has used drones to hunt and kill suspected terrorists and guerrilla fighters, mostly in Pakistan and Afghanistan.

American drones “are not designed to enter into contested or denied air space,” Mr. Easton said. “So they would be unable to fight in any conflict with China.”

China, on the other hand, is building drones, also called unmanned aerial vehicles, precisely to operate in contested spaces. “It’s a very useful instrument for safeguarding maritime sovereignty,” said Xu Guangyu, a retired major general and director of the China Arms Control and Disarmament Association. “China will gradually step up its use of U.A.V.’s in this area.”

Chinese strategists have discussed using drones in attack situations if war with the United States were to break out in the Pacific, according to the Project 2049 report. Citing Chinese military technical material, the report said the People’s Liberation Army’s “operational thinkers and scientists envision attacking U.S. aircraft-carrier battle groups with swarms of multimission U.A.V.’s in the event of conflict.”

University research centers are at the core of China’s drone program. The oldest research and production center for drones is the Northwestern Polytechnical University in Xi’an, where design work began in 1958. The ASN Technology Group, linked to the school, said on its Web site that it produces 90 percent of Chinese drones.

At the program’s start, China reverse-engineered drones it had acquired from the Soviet Union in the 1950s. It also got its hands on American drones that crashed in Vietnam in the 1960s and in China while monitoring China’s nuclear weapons program. China bought 100 Harpy armed drones from Israel in the 1990s — its only significant purchase of foreign-made drones — and the Pentagon later pressured Israel not to upgrade those drones for China.

In recent years, China has continued to acquire foreign drone technology and is especially focused on studying American models. “American U.A.V. technology is very sophisticated,” Mr. Xu said. “We can only envy their technology. Right now, we’re learning from them.”

For the Obama administration and American business executives, no method of Chinese technology acquisition is more worrisome than cyberespionage. An American official confirmed that drone technology had been stolen by hackers.

FireEye, the cybersecurity company in California, called the drone theft campaign Operation Beebus, traced back to a command-and-control node at bee.businessconsults.net. Cybersecurity experts say that general address and tools linked to it are associated with the Comment Crew, the Chinese hacker unit that Mandiant, another cybersecurity company, discussed in a report in February. Mandiant said the group was part of Unit 61398 of the People’s Liberation Army, based in Shanghai.

Though the initial victims in Operation Beebus were large defense contractors, the hackers began to pick out companies that specialized in drone technology, said Mr. Kindlund, FireEye’s threat intelligence manager. They then alternated between large companies that made a wide range of military technology and boutique firms that focused on drones.

In China, it is not just the military that is looking at uses for drones. In February, Liu Yuejin, the director of the antidrugs bureau in the Ministry of Public Security, which is responsible for domestic security, told Global Times, a state-run newspaper, that the ministry had considered using a drone armed with 44 pounds of explosives to kill a Burmese man in northern Myanmar suspected of ordering the murders of 13 Chinese sailors on the Mekong River. In the end, the idea was shelved because senior Chinese officials wanted the suspect, Naw Kham, captured alive.

Chinese drones are increasingly appearing in the arsenals of other nations. The Chinese version of the Predator, the Wing Loong, or Pterodactyl, was first exported in 2011, according to People’s Daily. At the Paris Air Show in June, the president of a Chinese aeronautics company told Global Times that the drone could carry two laser-guided missiles and was the equal of the Predator in endurance and flight range, but was much cheaper.

8 thoughts on “Hacking US secrets, China pushes for drones”