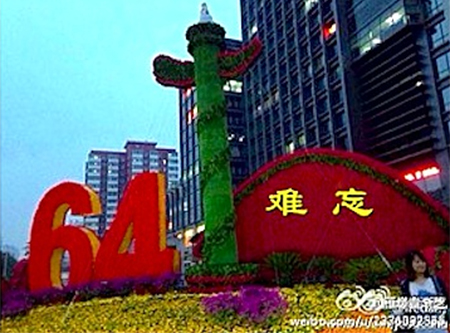 A screenshot shows an image that spread around the Sina Weibo microblogging platform on Tuesday, the 64th anniversary of the founding of the People’s Republic of China. The Chinese characters on the right, which appear to have been added using photo editing software, say “unforgettable.”

A country’s 64th birthday is usually the sort of humdrum occasion that is briefly marked and quickly forgotten. Not so in China on Tuesday, where the sight of 64s splashed across TV screens and on billboards has been jarring for many.

The number is highly charged in China due to its association with the post-Mao era’s most notorious event: the June 4, 1989, crackdown on protesters in Tiananmen Square. Used for decades as shorthand for one of the Communist Party’s darkest moments, the number is now virtually verboten, often banned in online searches and uttered in hushed tones when it comes up in conversation.

But with China’s top leaders bowing their heads toward the Monument to the People’s Heroes in a rain-drenched National Day celebration at Tiananmen Square on Tuesday morning, the censors had no choice but to loosen their grip. And the government’s online critics were quick to take advantage.

“This is a tough birthday for a certain party to deal with. Such a sensitive number, but one that’s unavoidable,” wrote one user of Sina Corp.’s popular Twitter-like Weibo microblogging service. “I’m going to sit and watch how busy the secretaries [censors] are.”

Sina Weibo typically applies a heavy filter to searches for “64,” sometimes even blocking them outright, but on Tuesday a search query on the site produced more than 43 million posts featuring the number.

Among them were numerous posts featuring a photo of a 64th anniversary flower arrangement with the words “Unforgettable” apparently Photoshopped in.

National Day commemorates the official founding of the People’s Republic of China, announced by Mao Zedong from atop the Gate of Heavenly Peace, on October 1, 1949.

“Isn’t our country recognized across the globe as the product of 5,000 years of Chinese civilization? How can some group say it’s 64 years old? Rumor, definitely a rumor,” one Weibo user wrote in a comment on the photo, taking a jab at new rules that threaten Internet users with jail if they post rumors that get republished 500 or more times.

Few users made a direct connection between the anniversary and the Tiananmen Square crackdown – the sort of the thing sure to attract the attention of censors. Instead, they opted for oblique references, in some cases simply writing the numbers and appending animated candle icons used to denote mourning.

“Warm congratulations to our great motherland on this sensitive birthday, and warm thoughts for the respected alumni who left us that day,” wrote one microblogger.

Popular newspaper columnist Yao Bo noted that Tuesday marked a week since the controversial execution of a street vendor found guilty of killing two urban security officials despite claiming self-defense. “A government that’s been around for 64 years shouldn’t allow its people to make enemies of each other,” he wrote.

Reformist legal scholar Xu Xin, meanwhile, posted a photo of the cover of China’s constitution with the message “64th anniversary.” In fact, the first Constitution of the People’s Republic of China wasn’t adopted until 1954, but reformers have lately been engaged in a pitched ideological battle with neo-Maoists over whether China should better protect individual rights enshrined in the document, including freedom of speech.

While censors may have eased up on the number itself, that doesn’t mean they weren’t busy trying to keep the discussion in-bounds. Sina Weibo, for example, blocked searches for “the day of the fall,” a phrase some microbloggers had been using to refer to the anniversary.