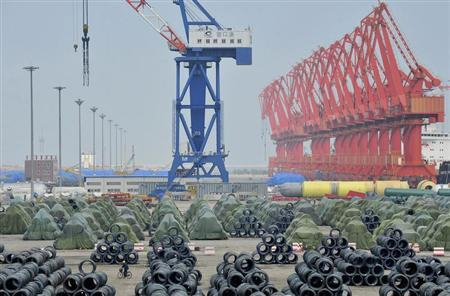 A worker rides his bicycle past piles of steel coils for export at a port in Yingkou, Liaoning province

China’s export growth fizzled in September to post a surprise fall as sales to Southeast Asia tumbled, data showed, a disappointing break to a recent run of indicators that had signalled its economy gaining strength.

China’s exports dropped 0.3 percent in September from a year earlier, the Customs Administration said on Saturday, sharply confounding market expectations for a rise of 6 percent, and marking the worst performance in three months.

Imports fared better, rising 7.4 percent in September from a year ago, better than forecasts for a 7 percent increase, shrinking China’s monthly trade surplus to $15.2 billion.

Indeed, the data showed Chinese exports to Southeast Asia, China’s fastest-growing export market in the past year, dived to a 17-month low in September. Capital outflows from the region on bets that the U.S. central bank will cut its bond purchases had hit demand, said Louis Kuijs, an economist at RBS in Hong Kong.

“Looking ahead, export data may be quite weak in the coming months,” Kuijs said, adding that financial turmoil in several emerging markets had dragged on global demand.

The dismal exports performance comes after the world’s No. 2 economy showed encouraging signs of stabilisation, having fought a slowdown that lasted in 12 of 14 quarters. Trade, factory production and the services sector all picked up in the past two months.

For a graphic on China’s trade, please click on link.reuters.com/ked55s

Attention now turns to China’s third-quarter gross domestic product data and other figures for September due next week.

The median forecast of 21 economists in a Reuters poll showed economic growth is expected to quicken to 7.8 percent in the third quarter from a year ago, up from 7.5 percent in the previous three months.

“Developed economies have shown signs of recovery but they are still unstable. The global economic situation is still complicated,” Zheng Yuesheng, a spokesman for the customs office, told a media briefing on Saturday.

Albeit patchy, the rebound in the global economy helped lift China’s total trade growth to 6 percent in the third quarter, from 4.3 percent the previous three months, Zheng said.

A breakdown of the data showed exports to Europe, the second-biggest buyer of Chinese good after the United States, South Korea, Taiwan, and Australia all fell last month. Shipments to Taiwan struck a 17-month low while those to Australia posted their worst growth in three months.

Japan was the lone bright spot, registering growth for Chinese exporters for the first time in eight months. Sales to the United States cooled, even though the monthly value of exports were at their highest in over a year.

They said activity was further hurt by the Mid-Autumn festival, which fell in the middle of September this year, reducing the number of working days in the month compared with 2012.

“The strong renminbi has eroded China’s export competitiveness,” ANZ Bank said in a note. It said there were risks that China’s economic growth may miss market forecasts this year, but predicted 2013 growth would hit 7.6 percent.

The yuan, which hit a record high of 6.1090 to the dollar on August 12, has gained 5.7 percent against 60 other currencies since January, data from the Bank of International Settlements showed, outstripping a 3 percent rise in the dollar.

In the face of China’s unsteady economic recovery, Beijing has repeatedly expressed confidence that the country can still achieve its 2013 growth target of 7.5 percent.

Central Bank Deputy Governor Yi Gang was quoted as saying this week in Washington that China’s annual economic growth this year could hit about 7.6 percent.

Analysts have long warned that a recovery in China’s economy may be fragile and brief, especially if Chinese leaders stick to plans for financial reforms, including curbing extravagant investment, which would hurt growth in the near term.

“Despite the subdued export outlook, we expect the government to maintain its current policy stance,” said Kuijs from RBS.

“We expect it to hold on to the firmer monetary stance that it is trying to pursue in order to rein in overall credit growth.”

Author of the book "Tiananmen's Tremendous Achievements" about how with the help of Tiananmen Protests, talented scholars with moral integrity seized power in the Party and state and brought prosperity to China. The second edition of the book will be published within a few days to mark the 25th anniversary of Tiananmen Protests All the parts in the first edition remain in the second edition with a few changes due to information available later and better understanding. There are also some changes for improvements of style. The new parts are Chapters 12-19 on events in China after the first edition was published: The fierce power struggle for succession between reformists and conservatives; Xi Jinping winning all elders’ support during his mysterious disappearance for 2 weeks in early September, 2012; and Xi Jinping Cyclone. Chan Kai Yee's new book: SPACE ERA STRATEGY: The Way China Beats The US An eye-opening book that tells the truth how the US is losing to China. The US is losing as it adopts the outdated strategy of Air-Sea Battle while China adopts the space era strategy to pursue integrated space and air capabilities: It is losing due to its diplomacy that has given rise to Russian-Chinese alliance. US outdated strategy has enabled China to catch up and surpass the US in key weapons: Hypersonic weapons (HGV) that Pentagon regards as the weapon that will dominate the world in the future. Aerospaceplane in China’s development of space-air bomber that can engage enemy anywhere in the world within an hour and destroy an entire aircraft carrier battle group within minutes. Anti-satellite (ASAT) weapons, anti-ASAT weapons, stealth aircrafts, drones, AEW&C, etc. The book gives detailed descriptions of China’s weapon development based on information mainly from Chinese sources that the author monitors closely. U.S. Must Not Be Beaten by China! China is not a democracy. Its political system cannot prevent the emergence of a despotic leader or stop such a leader when he begins to bring disasters to people. A few decades ago, Mao Zedong, the worst tyrant in world history did emerge and bring disasters to Chinese people. He wanted to fight a nuclear war to replace capitalism with communism but could not bring nuclear holocaust to world people as China was too weak and poor at that time. If a despot like Mao Zedong emerges when China has surpassed the US in military strength, world people will suffer the misery experienced by Chinese people in Mao era. China surpassing the US in GDP is not something to worry about as China has the heavy burden to satisfy its huge population, but China surpassing the US in military strength will be world people’s greatest concern if China remains an autocracy. US people are of much better quality than Chinese people. What they lack is a wise leader to adopt the correct strategy and diplomacy and the creative ways to use its resources in developing its military capabilities. I hope that with the emergence of a great leader, the US can put an end to its decline and remain number one in the world. China, US, space era strategy, air-sea battle, space-air bomber, arms race, weapon development, chan kai yee
View all posts by chankaiyee2 »
« Six wars China is sure to fight in the next 50 years
China got into bed with the U.S. Treasury and can’t get out »