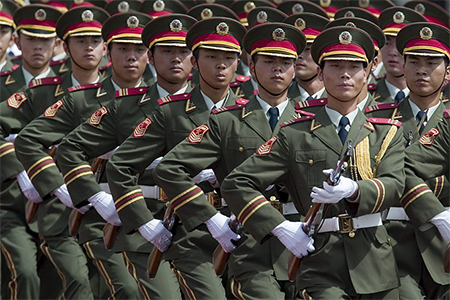 The opinions expressed in this article are those of the author, and not necessarily those of China Daily Mail.

According to the said article:

“China has denounced Japan’s plans to boost military purchases, accusing it of playing up regional tensions as an “excuse” to ramp up defence spending.

“The cabinet of hawkish Japanese Prime Minister Shinzo Abe agreed Tuesday to spend 24.7 trillion yen ($240 billion) between 2014 and 2019 — a five percent boost to the military budget over five years.

“Japan plans to purchase stealth fighters, drones and submarines as part of its efforts to boost military hardware that will beef up defence of far-flung islands amid a simmering territorial row with China.”

Geng Yansheng, the Chinese military spokesman said in a statement that they are “firmly opposed” to their neighbour’s spending plans.

Not content in showing the displeasure of his empire, said military spokesman even accused “Tokyo of playing up the perceived military threat from China” and further used it as an “excuse” to expand its military.

Japan is an independent country and a bona fide member of the international community! What is the business or the right of China to tell Japan how latter should spend its money?

What is the right of these Chinese brigands and pirates to impose their will to a sovereign and independent nation on how the said country should conduct its political life?

What China is doing is a clear intrusion and an unmistakable encroachment to the internal body politics of Japan! They have no right whatsoever to interfere in any way in any country’s domestic political determination!

Who are they to command another country?  When in fact and in truth, as it was categorically reported by the Sweden-based think-tank the Stockholm International Peace Research Institute (SIPRI) that “China has been boosting its defence budget for decades, and last year was the world’s second biggest military spender with an outlay of $166 billion.”

That is the height of China’s hypocrisy and shamelessness!

They can spend big on their military, but the others cannot! Wow, such a bunch of arrogant freaks!

Do they own the world? I do not think so!

If they have the right to tell another country on how that nation should conduct its affairs, does it also means that Japan too, can tell them to get out of the Senkaku Islands?

Can Japan too, tell China to stop the implementation of the so-called One-Child Policy and the utterly stupid One-dog policy?

I cannot understand, and I will never ever understand, the mentality of these Chinese military war-freaks!

They are the ultimate masters of Double Speak and Double Talk.

One moment, they will speak and talk like they are doves, yet their action is undeniably that of a hawk, worst than that of selfish wolves!

Where can you find a country who has a territorial dispute with almost all the rest of the countries in Southeast Asia, Japan, Taiwan, South Korea and even India?

That’s the imperialist and bullish China for you!

According, again, to their military spokesman, Geng, he viewed Japan’s actions “must cause great concern to neighbouring countries in Asia and the international community.”

Now, besides being the ultimate master of Double Speak, Bullyism and Hypocrisy, I never realised that China also is great in paranoia.

When the Philippines was struck by a super Typhoon last month, Japan was one of the first nations to arrive on the scene of the devastation to help the Filipinos, in whatever capacity they could.

China? Well, it took them nearly two weeks before they decided to help and that is after the international community hammered them repeatedly and criticised them harshly!

As pointedly and sharply observed by Victor Robert Lee, “Manila-Beijing-Washington: What the typhoon revealed”, The Diplomat, December 7:

“In the immediate aftermath of the typhoon, whose devastation became more apparent by the hour, the U.S. mobilised an entire aircraft carrier strike force of more than 5,000 sailors, along with five KC-130 aircraft, to provide relief supplies and transport injured victims. Other nations, including Japan, Australia, Taiwan, and Singapore soon followed suit. (Eleven days after the typhoon, following sharp international and domestic criticism, China offered to send a hospital ship and medical personnel).”

That is how “concerned” China is for the Asia-Pacific Region and for the international community!

That Geng is concerned and fearful that Japan’s military build-up will cause apprehensions and fear among Japan’s neighbours and the region is a product of his wild imagination.

No one is afraid, then the question naturally will lead us to ask: why is China concerned? Why are they afraid? What is the root source of their concern, fear and apprehension?

None of Japan’s neighbours are complaining about Tokyo’s action, except who? Yes, China!

Why? It is because they do not want a military competitor. That is the truth! I wonder if China does have the guts to say it frankly and directly without using some ambiguous and cryptic words!

China wants itself to be the only country that is militarily superior, but that cannot be!

The ultimate truth of this whole matter is the irrefutable fact that China is afraid of Japan. They perfectly knew right from the start that Japan is building up and upgrading its military to be uses and utilised solely by the latter as a defence and deterrence against China’s bullyism, expansionism, imperialism and aggression in the region.

For indeed, “tensions between Beijing and Tokyo have flared over the last year as the two have engaged in a bitter war of words over uninhabited islands in the East China Sea, known as Diaoyu in China and Senkaku in Japan.

“China has sent ships and aircraft into the area on scores of occasions, prompting counter deployments by Japan.”

Said tensions between the two countries were further “ratcheted up last month when China abruptly declared a new Air Defence Identification Zone over the East China Sea, including over disputed Tokyo-controlled islands called Senkaku in Japanese and Diaoyu in Chinese.”

So far, the US, Japan and their allies have repeatedly “violated” China’s so-called ADIZ.

Recently, the US and China nearly collided in the South China sea which prompted the Defence Secretary of America to tag China as “irresponsible”.

You do not own the world! Do not act as if you can bully all of us! Beware of committing an act that may lead not only to a regional conflict but a world war!

We have nothing to lose, unlike you, you will lose your empire, your bullyism, your aggression, your double speak and all your paranoia.

You have been warned!