China and Philippines: The reasons why a battle for Zhongye (Pag-asa) Island seems unavoidable 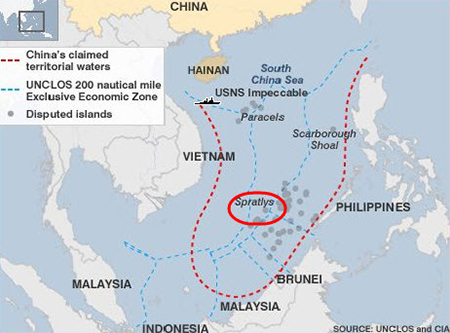 Following the report of China’s plans to occupy Zhongye (Pag-asa) Island (Chinese troops to seize Zhongye Island back from the Philippines in 2014), the author gives his reasons why it will likely occur.

Zhongye (Pag-asa) Island, the second largest in the South China Sea’s Spratly Islands, has an area of 0.33 square km, and is of great strategic significance for China if it wants to control a vast part of the South China Sea that it claims to be its territorial waters.

As the Island is located roughly in the middle of the area, if China builds an air force and naval base there, it will more easily control the sky and sea in the claimed area.

Taiping Island, the largest island there with a larger area, is a better choice. As it is controlled by Taiwan and there has so far been no prospects yet of reunification between mainland China and Taiwan, seizing Zhongye Island from the Philippines is China’s top priority in the South China Sea.

The world’s largest aircraft carrier, the Ford costs $12.8 billion to build but has only a deck area of 0.026 square km. An air base established on Zhongye Island will be a dozen times larger and cost much less, but it is unsinkable and has a very long service life.

The Philippines might have benefited greatly if the US had built an air base there to facilitate the US pivot to Asia and to counter China, but it is a pity that the Philippines drove the US away long ago.

You can read about this in my post: “South China Sea Disputes: Lucky China; Unlucky Philippines.”

Another advantage for China in taking the island is that the US and even Japan may divert some of their aircraft and warships to the area near the Philippines, and thus enable China to deal with less Japanese and US aircraft and warships when there is a war between China and Japan and possibly the US in the East China Sea. (Refer to the last five paragraphs of my post “South China Sea Disputes: Chinese Strategy.”

There is a post at fxcharter.com which gives the following background information:

“Eugenio Bito-onon Jr, mayor of the Kalayaan island group, part of the contested Spratly islands administered by the Philippines, recently confirmed that the Western Command of the Armed Forces of the Philippines has deployed new air force troops in rotation to the disputed island of Thitu, according to Jaime Laude in a report for the Manila-based Philippine Star on Jan. 5.

“Known as Pag-asa in the Philippines and Zhongye island by both China and Taiwan, Thitu is the second largest in the Spratly island chain in the South China Sea and the largest of all Philippine-occupied Spratly islands.

“Laude said that the air force troops were deployed to Thitu island by naval aircraft, which will give the residents of the island a chance to visit Kalayaan aboard the returning plane. He added that China’s maritime expansion into the South China Sea continues to put pressure on the Philippines, and the Philippine Navy have also been stationed in the area to defend the islands.”

“The first island chain refers to the first chain of major archipelagos out from the East Asian continental mainland coast. Principally composed of the Kuril Islands, Japanese Archipelago, Ryukyu Islands, Taiwan, the northern Philippines, and Borneo; from the Kamchatka Peninsula to the Malay Peninsula. Some definitions of the first island chain anchor the northern end on the Russian Far East coast north of Sahkalin Island, with Sahkalin Island being the first link in the chain. However, others consider the Aleutians as the farthest north-eastern first link in the chain.

“The first island chain has its purpose in Chinese military doctrine. The People’s Republic of China views the first island chain as the area it must secure and disable from American bases, aircraft and aircraft-carrier groups, if in defending itself it must tactically unleash a pre-emptive attack against an enemy. The aim of the doctrine is to seal off the Yellow Sea, South China Sea and East China Sea inside an arc running from the Aleutians in the north to Borneo in the south. According to reports by American think tanks CSBA and RAND, by 2020, China will be well on its way to having the means to achieve its first island chain policy.

China News is a collection of original and reposted news and articles about China, collected from the best sites around the web. It is also a place for writers about China to promote their own sites.
View all posts by China News »
« Can China stop organ trafficking?
Why China can’t take over the world »

33 thoughts on “China and Philippines: The reasons why a battle for Zhongye (Pag-asa) Island seems unavoidable”