Why China can’t take over the world 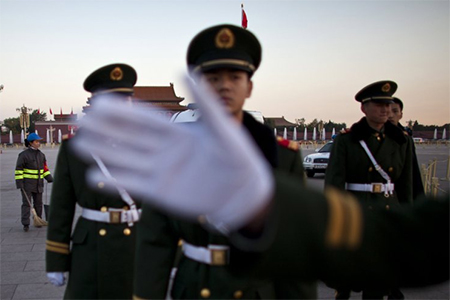 China is preparing to surpass the United States as the world’s largest economy, in purchasing power parity terms (using China’s grossly exaggerated economic figures). Already its economy is supposedly 80% the size of the US, and if current growth rate differentials persist, it could possibly take China only about four more years to surpass the US .

At market exchange rates, China’s GDP is much smaller, and is expected to remain less than the US until 2028. This is hardly surprising. After all, China has four times as many people as the US; if every Chinese worker were to earn the US minimum wage, its GDP would be larger than the US. That is not a very high bar. With that economic size comes military power and global cultural clout.

China’s awe-inspiring rise is often framed as the return to a historical norm. A common belief is that for most of the last 5,000 years, China was the world’s centre of wealth, culture, technology, and power. The 19th and 20th centuries, we are told, were a brief aberration, and China is now simply retaking its rightful place as the world’s preeminent nation. This trope gives China a certain air of inevitability.

The problem is, it’s not really accurate.

The truth is that for most of its history, China has struggled to overcome a number of chronic difficulties that have usually kept it from global preeminence.

Let’s start by recalling ancient China, starting from 5,000 years ago. The early pre-Chinese kingdoms – Xia, Shang, and Zhou – roughly coincided with ancient Egypt, Babylon, Persia, and Greece, and China’s famous Han Dynasty coincided with Rome. Ian Morris, a Stanford historian and author of Why the West Rules – For Now, has constructed an “index of development” that takes into account energy use, urbanisation, information technology and war-making capacity. According to Morris’ index, the Mediterranean and Middle Eastern civilisations of the Ancient and Classical periods were well ahead of their Chinese counterparts.

For example, the Roman Empire had many more miles of roads than Han China, and much more shipping. Although China had a few things that Rome did not – most notably the horse collar and paper – Rome in general had far more impressive engineering and technology, including advanced plumbing, mining techniques, and construction techniques. Han China was poorer–most people’s houses had dirt floors. In terms of basic science, Morris has less to say, but ancient Greece was hard to beat in this regard (though ancient China was ahead in algebra). Military power is hard to gauge, since China and the West never directly confronted each other.

According to Morris’ data, China became richer and more developed than the West’s leading nation around the 6th century A.D. The fall of Rome and the division of the Mediterranean into European and Middle Eastern halves stifled sea trade, while China assimilated its rich South and began growing rice on a large scale. For the next 1,000 years, China was the richest place on the planet. During the years from 500 A.D.  to 1200 A.D., China invented the compass, gunpowder, printing, compartmentalised ship hulls, paper money, advanced farming techniques, and a great deal of algebra and astronomy.

But China’s preeminence was hardly uncontested during this period. Though Europe was an economic, military and technological backwater during the Middle Ages, the Islamic empires – the Umayyad and Abbasid caliphates – rivalled China in size, and actually defeated China in their one military clash (the Battle of Talas). Islamic civilisation was also no slouch in basic science.

Meanwhile, China during its golden age was plagued by internal and external security threats. The An Shi rebellion tore apart China’s Tang dynasty at that empire’s height, killing millions; the dynasty never recovered. The Jurchen (ancestors of the Manchus) conquered North China in the 1100s, forcing the Sung Dynasty – the wealthiest and most technologically dynamic of the old Chinese dynasties – to relocate to the south. In the 1200s, the Mongols conquered all of China, which they ruled until 1368.

China regained stability during the Ming dynasty in the 14th to 17th centuries. During that dynasty, China was militarily powerful, defeating incursions by the Mongols, Japanese, Dutch, and Portuguese. But this period was also a “Great Stagnation” for China. Technological progress essentially stopped. A brief spurt of exploration by the Chinese explorer Zheng He (whose scope may have been exaggerated; none of the giant ships attributed to the expedition have ever been found) proved to be one of a kind, when the Chinese government restricted shipbuilding.

During the first half of the 2nd millennium A.D., the Middle East stagnated as well, but Europe was climbing out of the deep hole of the Middle Ages. By the 1500s, propelled by the discovery of the New World, Europe was making rapid strides in science and technology; by the 1600s, according to economic historians, much of Europe was richer than China.

So to sum up, China has always been one of the world’s leading civilisations over the last five millennia. But it has only held both economic and military preeminence for brief periods of time—the late 1300s and 1400s being the most notable. Why has China not been preeminent for longer stretches? History is not a science, but we can make some guesses. The very thing that makes China so powerful and important – its titanic size – also endows it with fundamental weaknesses.

Throughout its history, China has been plagued by enormous rebellions, from the An Shi rebellion in the 700s to the Taiping Rebellion in the 1800s. These rebellions are always incredibly destructive of human life and the economy. They often expose China to external conquest, as with the fall of the Ming dynasty in the 1600s or the Japanese conquests in the 1930s. They sometimes result in the rise of extremely destructive and dysfunctional regimes, like Mao’s ascendance in the 20th century.

Why does China have all these big rebellions? Because it’s big. Large countries are geographically and industrially diverse, and therefore it becomes difficult to agree on what public goods to provide (this is why city-states are often very efficient). Regions fight over resources. In addition, China is endowed with very few natural resources relative to its enormous population size, meaning that food and water shortages can be acute and terrible.

China’s incredible bigness has other drawbacks. It made China difficult to defend in ancient times. In modern times, it means that China has lots of powerful neighbour – India, Russia, and Japan – with whom relations are not always smooth. And some historians, such as Jared Diamond, have argued that China’s size held back its technological progress; because it could win wars by sheer size and rely on its domestic economy, they argue, China was never forced to invest in military technology or open itself up to trade.

To understand how China’s constraints are threatening its rise today, read In Line Behind a Billion People: How Scarcity Will Define China’s Ascent in the Next Decade. Authors Damien Ma and William Adams discuss not only China’s resource constraints, but also how its heterogeneity – the deep divides between urban and rural, interior and coast, rich and poor – represents a real constraint on development.

Fortunately for China, this time may really be different. Modern communication and transportation technology mean that a big country is easier to defend and to integrate. Globalisation, and China’s embrace of trade, mean that China is more open than it was during most of its history. But China has shown signs of worryingly isolationist instincts, harassing foreign companies operating within its borders. Meanwhile, China’s increasingly aggressive policies toward its neighbours – notably Japan and India, but also Vietnam and the Philippines – run the risk of inviting an effort at containment. The “Middle Kingdom,” like Germany in Europe a century ago, runs the risk of fighting all of its neighbours at once.

In other words, China is vulnerable now for the same reason it was vulnerable in ages past. History is not a tale of Chinese preeminence, but a tale of Chinese oscillation. The same thing that often kept China from realising its potential as the world’s dominant nation – its tremendous, unwieldy size – means that although it may surpass the US in total GDP, its supremacy may well be short-lived and incomplete.

Source: Quartz – Why China can’t take over the world

General Manager at Craig Hill Training Services * Get an Australian diploma by studying in your own country * Get an Australian diploma using your overseas study and work experience * Diplomas can be used for work or study in Australia and other countries. * For more information go to www.craighill.net
View all posts by Craig Hill »
« China and Philippines: The reasons why a battle for Zhongye (Pag-asa) Island seems unavoidable
China says it will be world’s biggest missile producer »

16 thoughts on “Why China can’t take over the world”