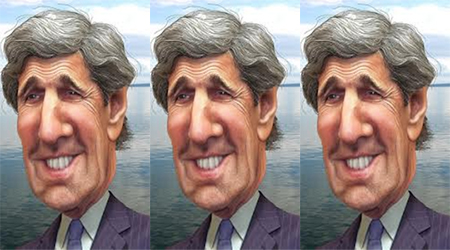 Secretary of State Kerry has had at least two historic diplomatic successes recently: demanding that Israel give the Palestinians whatever they want in exchange for n peace and begging Iran and her Supreme Leader Khamenei to be slightly more discrete about their acquisition and development of nukes.

With those successes behind him, having little else to do and needing an encore, Secretary Kerry plans next to seek an audience with Kim Jong-un, North Korea’s Dear Leader, to propose a technology exchange agreement similar to that between North Korea and Iran. Although it is still unclear whether Iranian President Rouhani will accompany him to mediate their talks, Secretary Kerry has asked him to do so as a symbol of their common goals and America’s friendship with Iran.

Although I haven’t been able to find an official copy, North Korea’s recently renewed agreement with Iran is said to provide:

In September 2012, North Korea and Iran signed a scientific and technological cooperation agreement. Largely dismissed as a propaganda ploy, it provided an organisational framework to set up joint laboratories and exchange programs for scientific teams, as well as to transfer technology in the fields of information technology, engineering, biotechnology, renewable energy, and the environment. In practice, the projects created a cover for these regimes to weather U.S.-led sanctions related to missile-proliferation activities. The new bilateral agreement thus appears to have formalised a recent mechanism through which both regimes had been regularly procuring specialised components, as well as sharing technical data and expertise. When one side masters or acquires a key missile-related technology, the other now institutionally benefits.

While the full text of the desired agreement between the U.S. and North Korea will almost certainly not be revealed to outsiders – or for that matter to Secretary Kerry – something along these lines is what he hopes to get:

An organisational framework to set up joint laboratories and exchange programs for scientific teams, as well as to transfer technology in the fields of information technology, engineering, biotechnology, renewable energy, and the environment.

The initial focus will be on North Korea’s exciting technological advances which enabled her to send an astronaut to the Sun and return him safely to Earth as well as on the use of advanced North Korean technology to eliminate the existential threats of global warming. 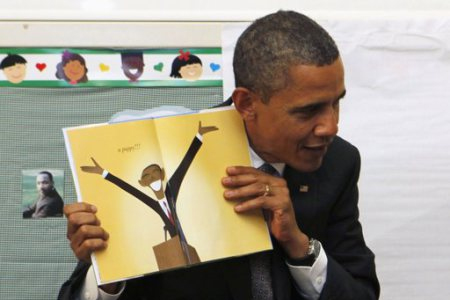 If Iran is interested in similar arrangements with the United States, Secretary Kerry hopes to discuss the matter with President Rouhani during his visit or upon his successful return from North Korea.

The North Korean dictatorship recently landed an astronaut on the Sun, violating numerous

international obligations. In response to that rogue nation’s efforts to assume sovereignty over the Sun, President Obama recruited active duty and recently retired U.S. military officers of flag rank (a partial list of volunteers is available here). He promptly overcame all reluctance to honour their clear patriotic obligations and they are leaving immediately for the Sun to establish a U.S. presence there. Their mission will protect at least two vital U.S. interests:

♦ To prevent further solar colonisation attempts by North Korea’s Dictator, Kim Jong-un
♦ To demonstrate that the Sun does not cause global warming because it is not all that hot and that massive efforts are still needed to halt and reverse the disastrous effects man-made global warming.

Due to his profound admiration for Dear Leader Kim’s methods of governance it had been painful for him to appear hostile.

Therefore, Secretary Kerry had no difficulty convincing the President that we can’t wait for the return of our own volunteer astronauts from the Sun after successfully challenging North Korea’s Solar supremacy and that peaceful negotiations always provide a far superior path to true peace and understanding.

The President now fully endorses the Kerry proposal. He was, therefore, delighted to provide a collection of his personally autographed books and a dozen recordings of his very own speeches to give to Kim Jong-un along with the cases of premium brandy the Secretary intends to take. 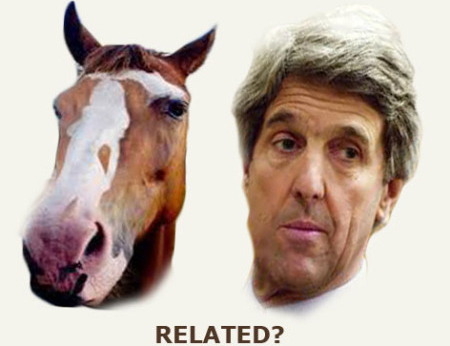 John Kerry – The Year of the Horse

Unfortunately, he has had to resist the temptation because he knows far better than anyone else that he could not be spared even briefly from his many onerous duties in Washington – despite the happiness his visit would bring to him as well as Kim Jong-un. As soon as the Dear Leader approves and signs the agreement, President Obama intends to invite him to the White House for a state visit and celebration with Iranian President Rouhani and a few other World leaders.

President Obama’s enthusiasm for Secretary Kerry’s visit as his personal representative became boundless when His interim Ambassador to Iran, Dennis Rodman – not noticeably drunk at the time – told him that this is the beginning of the Year of the Horse in North Korea and that the Secretary’s (alleged) facial resemblance could provide a helpful symbolic advantage.

North Koreans are expected to welcome Secretary Kerry just as they welcomed their glorious Year of the Horse, anticipated to bring continued peace and prosperity to all of the Dear Leader’s loyal subjects.

Citizens in North Korea welcomed the new year with “beautiful dreams, great ambitions, confidence of future and optimism” according to the state-run Korean Central News Agency, adding “cheerful laughter is heard from every family”.

The lunar calendar is based on the cycles of the moon and through Chinese folklore ascribes 12 animals, one for each year in the rotating cycle. The horse is in the seventh position.

We all join in wishing Secretary Kerry the very best of good fortune as he trots bravely across the finish line to win yet another victory for his and President Obama’s stellar foreign policies.

I was graduated from Yale University in 1963 with a B.A. in economics and from the University of Virginia School of law, where I was the notes editor of the Virginia Law Review in 1966. Following four years of active duty with the Army JAG Corps, with two tours in Korea, I entered private practice in Washington, D.C. specializing in communications law. I retired in 1996 to sail with my wife, Jeanie, on our sailboat Namaste to and in the Caribbean. In 2002, we settled in the Republic of Panama and live in a very rural area up in the mountains. I have contributed to Pajamas Media and Pajamas Tatler. In addition to my own blog, Dan Miller in Panama, I an an editor of Warsclerotic and contribute to China Daily Mail when I have something to write about North Korea.
View all posts by danmillerinpanama »
« Chinese media claims: Japan has plans to force down Chinese jets; Chinese jets chase away Japanese jets
China says Japan’s ‘hype’ on air defence zone spreads tension »