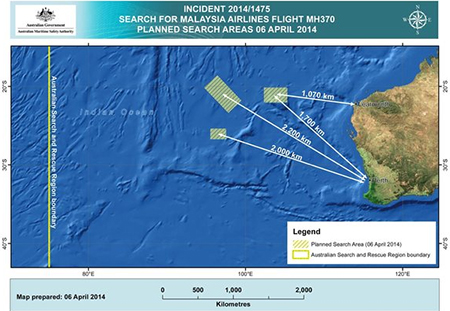 Searchers looking for the data recorders from missing Malaysian Airlines flight 370 said Sunday that they were investigating underwater “acoustic events” in two distinct areas of the Indian Ocean – one picked up by an Australian vessel and two others recorded by a Chinese patrol ship.

The Australian military vessel Ocean Shield, towing a sophisticated pinger locator lent by the U.S. Navy, reported Sunday morning that it had picked up a signal, said Air Chief Marshal Angus Houston, who is coordinating search efforts from Perth, Australia.

That report comes on the heels of a Saturday night report from the Chinese ship Haixun 01 that it had detected pulse signals both Friday and Saturday at 37.5 mHz, the same frequency used by an airplane flight data recorder.

Houston called the Haixun 01 findings  “the most promising lead” and said airplanes as well as the British ship Echo were in route to the area where Haixun 01 was operating to investigate further.  Commodore Peter Leavy, the task force commander in Perth, said it would take at least 14 hours for the Echo to arrive at that location.

At a news conference from Perth, Houston said investigators had made a “correction” to their calculations – based on satellite data – as to where the Boeing 777 had most likely entered the Indian Ocean after disappearing March 8 with 239 people aboard.

As a result of the correction, searchers were going to focus Sunday on the southern portion of the designated search area, rather than the northern portion. The Haixun 01 is operating in the southern part of the zone, he said. Water in the vicinity is extremely deep – nearly 3 miles, he said.

“Any recovery operation is going to be quite challenging … if there is anything down there,” Houston said, and investigators are “a long way from making that conclusion.”

Houston cautioned that all of the pulses detected so far were brief and unverified.  These are “fleeting, fleeting acoustic events,” he said, rather than a continuous transmission.

“We need HMS Echo and Ocean Shield to come to [Haixun 01’s] location,” he said. “But the fact that we’ve had two detections, two acoustic events in that location provides some promise that requires a full investigation.”

The Chinese findings were publicised Saturday night through Chinese state-run media and appeared to catch Houston’s team off-guard. Asked Sunday about whether there were coordination efforts with the Chinese fleet participating in the search, Houston sought to play down any conflicts.

“On a search like this, with journalists travelling on ships and airplanes, information will come out that has to be responded to,” Houston said.  “I accept the reality of that.”

Houston said he had spent two hours Saturday with China’s ambassador discussing ways to improve communication. He said language had sometimes been “an issue” and that a Chinese liaison officer was going to be assigned to the Perth coordination centre to bolster efforts.

“China is sharing everything that is relevant to this search,” he said.  “We should focus on the positives.”

China News is a collection of original and reposted news and articles about China, collected from the best sites around the web. It is also a place for writers about China to promote their own sites.
View all posts by China News »
« Courage and defiance: The Philippines act of standing up against China
Sunflower Movement: A day on the ground in Taiwan protest (photos) »