Philippines says U.S. obligated to help in case of attack by China 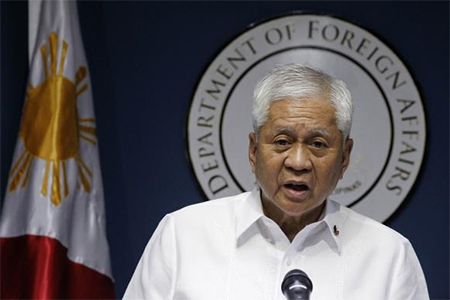 The United States has a treaty obligation to help the Philippines in case of an attack on its territory or armed forces in the South China Sea, the Philippine foreign minister said on Wednesday, rejecting questioning of a security pact.

The deal was testimony to an “ironclad” U.S. commitment to defend its oldest Southeast Asian ally, U.S. President Barack Obama told troops from both countries this week while on a visit to Manila.

But Obama did not say categorically the United States would defend the Philippines in its territorial disputes with China in the South China Sea, leading to some questions in the Philippines about the scope of the pact.

“Under the Mutual Defense Treaty, the U.S. will come to the assistance of the Philippines if our metropolitan territory is attacked or if our armed forces are attacked in the Pacific area,” del Rosario said.

“In 1999, in a diplomatic letter, the U.S. affirmed that the South China Sea is considered as part of the Pacific area.”

China claims virtually the whole of the South China Sea and has in the past couple of years been much more assertive in staking its claim.

In 2012, China seized control of a disputed reef known as the Scarborough Shoal, preventing Filipino fishermen from getting near the rocky outcrop.

They continue to blockade the area.

The Philippines in March lodged a case against China at an arbitration tribunal in The Hague to try and settle the festering territorial dispute.

Brunei, Malaysia, Vietnam and Taiwan also have claims on the South China Sea, where $5 trillion of ship-borne trade passes every year and is believed to have rich deposits of oil and gas.

China’s Foreign Ministry said maintaining peace and stability “accords with all sides’ interest” and would require hard work by all sides.

“The (Chinese) people have reason to demand that any agreement signed by the United States and the Philippines accords with this principle and does not harm mutual trust with other countries in this region and regional peace and stability,” ministry spokesman Qin Gang told reporters at a regular briefing.

“Through the Enhanced Defence Cooperation Agreement, the Philippine government has surrendered our sovereignty to free-loading U.S. forces,” said Renato Reyes of the left-wing Bayan (Nation) group.

Author of the book "Tiananmen's Tremendous Achievements" about how with the help of Tiananmen Protests, talented scholars with moral integrity seized power in the Party and state and brought prosperity to China. The second edition of the book will be published within a few days to mark the 25th anniversary of Tiananmen Protests All the parts in the first edition remain in the second edition with a few changes due to information available later and better understanding. There are also some changes for improvements of style. The new parts are Chapters 12-19 on events in China after the first edition was published: The fierce power struggle for succession between reformists and conservatives; Xi Jinping winning all elders’ support during his mysterious disappearance for 2 weeks in early September, 2012; and Xi Jinping Cyclone. Chan Kai Yee's new book: SPACE ERA STRATEGY: The Way China Beats The US An eye-opening book that tells the truth how the US is losing to China. The US is losing as it adopts the outdated strategy of Air-Sea Battle while China adopts the space era strategy to pursue integrated space and air capabilities: It is losing due to its diplomacy that has given rise to Russian-Chinese alliance. US outdated strategy has enabled China to catch up and surpass the US in key weapons: Hypersonic weapons (HGV) that Pentagon regards as the weapon that will dominate the world in the future. Aerospaceplane in China’s development of space-air bomber that can engage enemy anywhere in the world within an hour and destroy an entire aircraft carrier battle group within minutes. Anti-satellite (ASAT) weapons, anti-ASAT weapons, stealth aircrafts, drones, AEW&C, etc. The book gives detailed descriptions of China’s weapon development based on information mainly from Chinese sources that the author monitors closely. U.S. Must Not Be Beaten by China! China is not a democracy. Its political system cannot prevent the emergence of a despotic leader or stop such a leader when he begins to bring disasters to people. A few decades ago, Mao Zedong, the worst tyrant in world history did emerge and bring disasters to Chinese people. He wanted to fight a nuclear war to replace capitalism with communism but could not bring nuclear holocaust to world people as China was too weak and poor at that time. If a despot like Mao Zedong emerges when China has surpassed the US in military strength, world people will suffer the misery experienced by Chinese people in Mao era. China surpassing the US in GDP is not something to worry about as China has the heavy burden to satisfy its huge population, but China surpassing the US in military strength will be world people’s greatest concern if China remains an autocracy. US people are of much better quality than Chinese people. What they lack is a wise leader to adopt the correct strategy and diplomacy and the creative ways to use its resources in developing its military capabilities. I hope that with the emergence of a great leader, the US can put an end to its decline and remain number one in the world. China, US, space era strategy, air-sea battle, space-air bomber, arms race, weapon development, chan kai yee
View all posts by chankaiyee2 »
« China poised to pass U.S. as world’s leading economic power this year
China points to suicide blast in Urumqi attack »