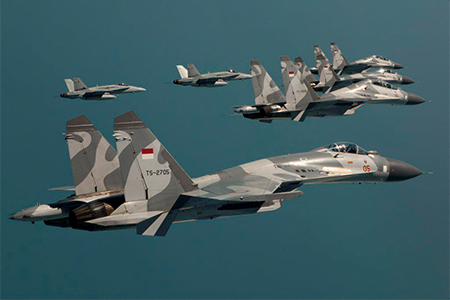 Indonesia is beefing up its air presence along the South China Sea, a military officer has announced.

According to IHS Jane’s, Lieutenant Colonel Andri Gandy, the commander of Ranai airbase on the Riau Islands, which borders the South China Sea, said Indonesia was upgrading the airbase so that it could accommodate Sukhoi Su-27 and Su-30 fighter aircraft. Separately, Indonesian Army (TNI-AD) Chief of Staff General Budiman said that four Boeing AH-64E Apache attack helicopters would be deployed to Ranai airbase.

Lt. Col Gandy said that the TNI had already installed runway lights, taxiway lights and integrated radar at the airbase. He added that there were plans to extend the length of the runway in order to accommodate the Su-27 and Su-30s.

The announcement comes at a time when Indonesia has been raising concerns about China’s territorial designs on the Natuna Sea off the coast of the Riau Islands. As The Diplomat previously reported, Commodore Fahru Zaini, a senior Indonesian defence official, told reporters: “China has claimed Natuna waters as their territorial waters. This arbitrary claim is related to the dispute over Spratly and Paracel Islands between China and the Philippines. This dispute will have a large impact on the security of Natuna waters.”

Although there have long been suspicions that China’s nine-dashed line overlapped with Indonesia’s exclusive economic zone (EEZ) off the Riau Islands, Indonesia has refused to officially acknowledge the dispute exists. Zaini’s comments seemed to depart from this position.

However, as Evan A. Laksmana has pointed out, the Indonesian government quickly disavowed Zaini’s statement. For example, just days after Zaini spoke, Foreign Minister Marty Natalegawa stated: “Firstly, there is no territorial dispute between Indonesia and China, especially about the Natunas. In fact, we are cooperating with China in possibly bringing about foreign direct investment plans in the Natunas. Second, we are not a claimant state in the South China Sea.”

Laksmana also points out that Indonesia has long planned to beef up its military forces in the Natuna region as one of its “flashpoint defence” areas. The Jane’s report said that Zaini described the Su-27 and Su-30s deployment as part of Indonesia’s Minimum Essential Force (MEF) concept, which Jane’s explained: “aims to establish the nature and minimum scale of military capabilities that Indonesia should seek to deploy in response to a strategic threat.”

According to Laksmana, the “The MEF was designed less for a China threat and more for an organizational and technological revamp (the TNI lost numerous men due to accidents and platform decay in the past decade).” However, Laksmana has argued that the military attention Indonesia has given the Natuna region is related to the uncertainty over China’s claim to it. As he wrote in The Diplomat in 2011, the uncertainty over China’s claims is the reason why “Indonesia held two of its largest-ever joint military exercises in the area. China’s claim is also likely behind Indonesia’s decision to forge strategic and security partnerships with Australia, India, and the United States in recent years.”

The importance of the Natuna region is both strategic and economic. With regards to the former, it is located at the southern tip of the crucial Malacca Strait, where much of Northeast Asia’s oil and natural gas imports travel through. Economically, the Natuna seas are believed to contain huge amounts of natural gas. According to the International Energy Administration, the East Natuna Block holds about 1.3 tcm of gas reserves, nearly half of all Indonesia’s proven natural gas reserves. The IEA also said this block is Indonesia’s largest undeveloped gas prospect.

General Manager at Craig Hill Training Services * Get an Australian diploma by studying in your own country * Get an Australian diploma using your overseas study and work experience * Diplomas can be used for work or study in Australia and other countries. * For more information go to www.craighill.net
View all posts by Craig Hill »
« Blasts kill dozens at market in China’s restive Xinjiang region
China: Billionaire Liu Han sentenced to death for organised crime »