The homophobia of China’s Communist Party; vilifies eChinacities owner on his own website

Disappointingly, homophobia is alive and thriving in China, and actively incited by China’s ruling Communist Party. It seems that even loyal party members are not exempt. George Xu, founder and owner of the expat website eChinacities, seems to be the latest victim.

For some time, China Daily Mail has expressed concern over expat websites being taken over by the CCP, and used as propaganda platforms aimed at vulnerable expats living in China. One of the major expat sites taken over is eChinacities (ECC), founded and (until recently) operated by George Xu.

Many expats do no assimilate well into Chinese society, and look to expat sites to fill the gap of loneliness. After the initial excitement of arriving in China, culture shock soon sets in, and a large number of expats never get past this stage. Over time, the sites becomes a major part of their lives. The CCP recogises this, and use wumaos (paid internet commentators) to create fake expat identities to sway the opinions of the real expats, even pretending to befriend them.

On eChinacities, the main perpetrator of this scam is an identity known as Hulk, who creates fantastic tales of superhuman feats, which appeals to lonely expats. Hulk contacts these people directly, even sending a photograph to “prove” he is a real person. This is a common practice used by scammers and internet predators.

Hulk was so successful with this, that he created numerous other identities on the same website (the Hulk identities), all of which claimed to have met Hulk, and could further verify that he was a real person. Some of these fake identities are easily recognisable, as they have numbers in their screen names.These fake names include mike695ca, Victoria1987, Xinyuren, Xuliang, ScotsAlan, theFidu881, DrMonkey, Ironman510, Shining_Brow and many others.

While most real expats realised this and left the site, a relatively small number accepted it, and actually joined Hulk in his campaign of harassment against all who try to oppose the Hulk identities in any way, including China Daily Mail.

The campaign against our site, while obsessive and relentless, is inconsequential, as ECC has little credibility and few real expats any more. The majority of active profiles on the site, over the past 12 months, are Hulk identities or other wumaos. For many months we have ignored it.

However, last week, a new CCP-appointed administrator at ECC, aided by the Hulk identities, took it to new depths of reprehensibility, even by CCP standards. Making a desperate grab for attention, they launched a personal attack against me on the ECC site, in a failed attempt create anger. At the same time, they decided to shame the owner of the site, George Xu, by making preposterous claims of sexual deviation, and exposing his homosexuality. The “George” mentioned in the following post by Hulk identity “mike695ca” is George Xu, ECC’s owner (warning – graphic language): 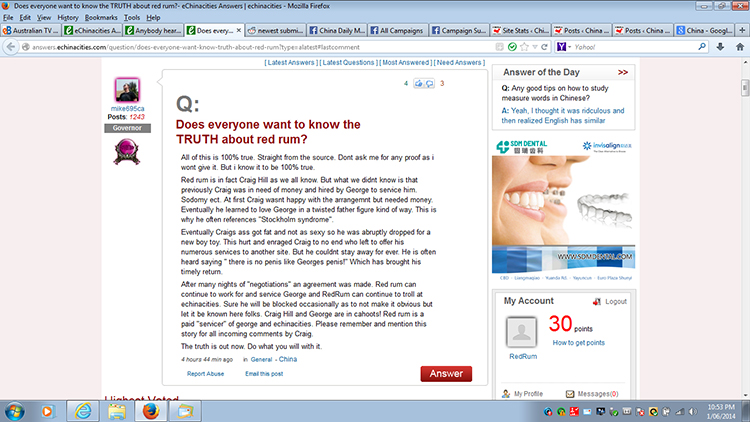 The attack against George Xu on his own site, eChinacities

The thing to remember about homosexuality is that it was considered a mental illness and a criminal act in China until 2007. Under pressure from the International Olympic Committee (IOC), China “legitimised” homosexuality prior to the 2008 Beijing Olympics, though it was never legalised. However, immediately after the Olympics, the CCP again sanctioned intolerance, seemingly as a direct snub to both the IOC and the west in general.

Despite strict ECC rules stating that personal attacks will result in being banned permanently from the site, neither mike695ca nor Hulk were banned for even one day for this attack. Any attacks by real expats on any of the Hulk identities, or China, results in an immediate ban, though the banned person is allowed back after issuing an apology and pledging loyalty to the ECC site. In my own case, I refused to apologise when banned. It is just another form of brainwashing.

On a personal basis, I have known George Xu since 2011, when I commenced working at eChinacities. The CCP administrator, however, denies that I ever worked at ECC, and incredibly accuses me of being a (Chinese) wumao. She even took the trouble to delete all my bylines on all my ECC articles, to try to give credibility to the lie, and to deceive the few regular expat readers. Compare the bylines on the link to the screenshot of the original article (on China Daily Mail), and the story as it stands on ECC now:

However, she does admit to being an organ of the CCP:

One of the many personal attacks against China Daily Mail Editor Craig Hill, made by eChinacities’ CCP-appointed site administrator

I have always found George to be a man of honour and intelligence, though I have never actually met him in person, and we have had some disagreements in the past year. His homosexuality has never been an issue in our professional relationship, and he has never denied it, despite China’s Draconian attitude towards it. Now, the site he founded and built up is being used as a weapon to humiliate him, and to compromise the principles of harmony between China and the west that he has always dreamed of.

China Daily Mail management strongly condemns the homophobic attitudes displayed by the CCP administrator and the wumao Hulk identities at eChinacities. We encourage readers to send messages of support for George Xu and/or condemnation of the CCP and ECC at: editor@echinacities.com

Editor’s Note: Neither George Xu nor myself believe that anybody will be swayed in any way by the spurious attacks made on the ECC website. However, we decided to publish this article to highlight the official homophobia which exists as part of the CCP culture.

General Manager at Craig Hill Training Services * Get an Australian diploma by studying in your own country * Get an Australian diploma using your overseas study and work experience * Diplomas can be used for work or study in Australia and other countries. * For more information go to www.craighill.net
View all posts by Craig Hill »
« An open letter to Chinese Communist Party regarding universal suffrage in Hong Kong (part I)
China: Can 20 plus years of prosperity after suppression at Tiananmen justify the massacre? »

2 thoughts on “The homophobia of China’s Communist Party; vilifies eChinacities owner on his own website”