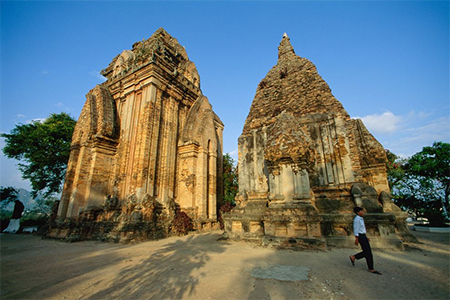 The Cham towers in Nha Trang, Vietnam, were built between the 7th and 12th centuries

In Vietnam, roughly 160,000 members of the Cham ethnic minority, whose forebears dominated the South China Sea for more than a millennium, are quietly watching on the sidelines of the escalating conflict in the waters they may have a historical claim to:

Tensions in the South China Sea reignited last month, when China deployed a government-owned oil drilling rig in an area also claimed by Vietnam just south of the Paracel Islands.

Anti-China protesters broke into and torched Chinese, Taiwanese, and South Korean factories in southern Vietnam. According to media reports, as many as 21 people died in the chaos, and more than a hundred were injured. Thousands of Chinese workers fled the country.

Under dispute are the Spratly and Paracel archipelagos, which are mostly uninhabited, and a central region of the South China Sea, which is home to overlapping claims by China, Vietnam, Taiwan, Malaysia, Brunei, and the Philippines.

But the dispute between Vietnam and China is grabbing the most attention. Both have referred to historical ties with the islands, in China’s case dating to the Han Dynasty (206 B.C. to A.D. 220), to support their claims in the region.

Meanwhile, in Vietnam the roughly 160,000 members of the Cham ethnic minority, whose forebears dominated the South China Sea for more than a millennium, are quietly on the sidelines of the escalating conflict.

Two centuries after their then-diminished dominion ended violently at the hands of Vietnamese Emperor Minh Mang, the Cham remain wary of engaging in such disputes, the current version of which is a reminder of the symbolic and economic importance of the South China Sea and of the Cham culture that once was enriched by trade across it.

For centuries the South China Sea was known by navigators throughout Asia as the Champa Sea, named for a great empire that controlled all of central Vietnam, from the northern border of today’s Quang Binh Province to roughly the southern border of Binh Thuan Province.

At the peak of the Champa empire, from around the 6th to the 15th centuries, its various kingdoms, presided over by regional royal families, also included sizable portions of eastern Cambodia and Laos.

The oldest artifacts of a distinctly Cham civilization—brick flooring, sandstone pillars, and pottery found at Tra Kieu in Quang Nam Province—date to the second century A.D.

A notable Champa legacy is the red-brick temples, or Cham towers, the oldest found dating to the seventh and eighth centuries. The temple city of My Son, near Hoi An, preserved as a UNESCO World Heritage site, has nearly 70 individual structures.

Archaeologists have identified several Cham citadels and some 25 temple sites (each with varying numbers of towers) still standing along Vietnam’s coast. Recent explorations suggest that hundreds of ruined sites may line rivers leading into the Central Highlands and beyond to eastern Cambodia and Laos.

Malayo-Polynesian-speaking ancestors of the Cham are thought to have arrived in Vietnam by sea from Borneo. Most scholars believe the Cham are descendants of the Sa Huynh, who occupied the same area from roughly 1000 B.C. to the second century A.D., when the Cham culture began flowering.

Sa Huynh relics have been found as far away as Taiwan, the Philippines, and Malaysia, indicating that the people sailed, traded, and settled around what was then the Champa Sea.

Ornate burial earrings included a style consisting of a hanging bar with a horned animal head on either end. The earrings were often made of glass, gemstones, or jade from Taiwan.

Recent excavations uncovered evidence of Sa Huynh burial sites (and Cham relics) not only on the Vietnamese mainland and offshore islands such as Phu Quy, but also on the islands of Namyit and Spratly—ground zero of today’s contested area. 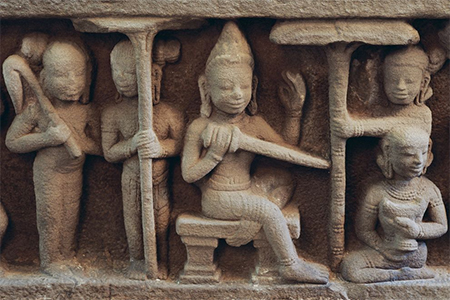 This bas-relief sculpture is one of many in the temple city of My Son, a UNESCO World Heritage site in Vietnam

The Cham had a vast trade network, with routes extending northeast to China, Taiwan, and Japan and south to Malaysia and Indonesia.

Their wealth—gold and silver, gems, spices, aromatic agarwood, exotic animals, and slaves—was renowned all the way to India, the Middle East, and even the farthest reaches of North Africa.

Several shipwrecks are evidence of trade between Champa and the Philippines via the Spratly Islands. One vessel—the Pandanan wreck, found off the Philippine island of Palawan—is believed to have left the Champa coast sometime between 1450 and 1470, carrying green-glazed ceramics made in the Cham kingdom of Vijaya.

In 1997 Philippine authorities salvaged a centuries-old vessel off Thitu Island in the Spratlys containing about a thousand granite carvings that appear to have been taken from unknown Champa sites.

Many of the habitable islands in the western part of the ancient Champa Sea held Cham communities. Cham temple ruins, pottery, jewelry, and bricks have been found on Phu Quy, for instance. People in the area today, although considered ethnic Vietnamese, speak a dialect unlike that of mainlanders, and their crafts and culture are more similar to those of the Cham than the Vietnamese.

A Mix of Faiths

The Cham are renowned for their handwoven textiles. Their fabrics are exported, then often passed off as local goods

The Cham took up Hinduism early, likely converted by Indian merchants, and blended it with their traditional beliefs. Hindu Cham are called Balamon.

Before the end of the first millennium, Muslim traders introduced Islam, and Muslim Cham became known as Bani.

As early as 986, Chinese records refer to communities on the island of Hainan that were made up of Cham Muslims, whose descendants today are Utsuls.

In addition to their respective Muslim and Hindu practices, Balamon and Bani both worship ancestors, kings, and Cham deities. Bani, and some Balamon, observe a variation of Ramadan called Ramawan.

The Champa empire was the chief rival of the Khmer Empire, in Cambodia, and Dai Viet, an early Vietnamese kingdom to the north. Champa’s conflicts with Dai Viet seem to have started at the end of the tenth century, as the Vietnamese pushed south to the Cham kingdom of Vijaya (today’s Quy Nhon).

Bas reliefs in a temple at Angkor depict an epic naval battle between the Khmer and Champa in the 12th century. The Cham navy was unrivaled, but on land the Cham suffered many costly defeats.

Territorial wrangling continued until 1471, when Vijaya was finally captured, and by the mid-1600s the Champa empire had been reduced to its southern kingdom of Panduranga (now Ninh Thuan and Binh Thuan Provinces, where most of Vietnam’s Cham descendants live today). By then, a Cham diaspora had spread to Cambodia, Hainan, the Philippines and Malaysia.

In 1832, Emperor Minh Mang set out to crush the last vestiges of Cham autonomy and stamp out the culture, burning Cham villages and farmland and destroying ancient temples. Many Cham fled to Cambodia, where their descendants number in the hundreds of thousands today.

A Rich but Beleaguered Culture 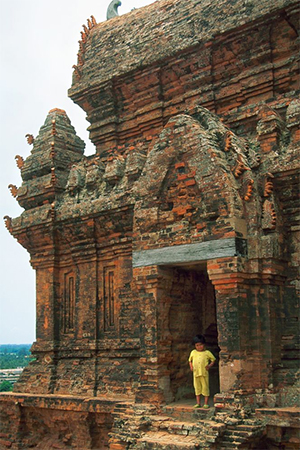 Physical evidence of Cham culture in Vietnam is disappearing. In Binh Thuan Province and elsewhere, Cham temple sites and ancient tombs have been overrun by paddies, dragonfruit plantations, and shrimp farms. In Quang Ngai Province, temple sites have been damaged or destroyed by gravel quarrying.

The Vietnamese continue to build Buddhist temples atop the ruins of Cham religious sites and to use bricks from Cham citadels to build their houses.

Hill tribes relocated from the far north of Vietnam now live in Champa’s last capital, Song Luy, brought down during Minh Mang’s purge. There’s no mention of Song Luy in Vietnamese history books, and it’s ignored in official tourism materials, despite its proximity to the country’s largest resort, in Mui Ne.

The Cham are renowned for their textiles, handwoven on looms. Their fabrics are exported (and often imitated), then passed off as local goods and sold in tourist markets by local tribes in cities like Louangphabang (Laos), Siem Reap (Cambodia), Chiang Mai (Thailand), and, closer to home in Vietnam, Sa Pa.

After the Vietnamese conquered Cham kingdoms, they routinely co-opted their musicians, whose style had a significant influence on early Vietnamese court music. Today every major resort or restaurant seems to have Cham musicians on staff (although only two families remain who make the traditional Cham instruments—a wooden drum and a small, clarinet-like woodwind instrument).

The Cham are one of the few ethnic minorities in Indochina to have developed their own writing system, based on Sanskrit. Very few Cham can still read and write their native language, and the spoken language is at risk of eradication too, because government policy requires the use of Vietnamese in schools, commerce, and public activities.

Cham living conditions are generally inferior to those in ethnic Vietnamese (Kinh) villages. Mud houses with crumbling walls are common, and most Cham don’t have running water, let alone refrigeration. Electricity is intermittent.

The Vietnamese government no longer allows Cham dead to lie in state in family homes for several weeks before burial. Some Cham practice “second burial,” which involves exhuming the remains on the anniversary of a person’s death and holding a feast for friends, family, and neighbors with prayers, loud music, and religious rites.

Given how clear and long-standing the evidence of Cham influence over the South China Sea is, why doesn’t Vietnam now use the authority of Champa history to bolster its territorial claims in the region?

Relations between the Hanoi government and ethnic minorities are sensitive. In 2001 and 2004 massive human rights protests by hill tribes resulted in deaths and mass imprisonments. For some time after that, the Central Highlands were sealed off to foreigners.

Sporadic protests and riots on a smaller scale still occur, and accusations of human rights violations by the government are common in minority areas.

Although they’re full Vietnamese citizens, the Cham are nonetheless a conquered people. If they themselves raise the issue of Champa’s historical sovereignty over the South China Sea, which in turn would raise questions about their lost autonomy in their ancestral land, this could upset the Vietnamese government.

Neither the Cham nor the Vietnamese government want to unsettle the current balance.

Adam Bray has contributed to nearly 40 books on travel in Southeast Asia. He is a former resident of Phan Thiet, Vietnam, where he studied Cham culture and history and learned to read and write modern Cham. He has located and explored many undocumented Cham ruins.
Source: National Geographic – The Cham: Descendants of Ancient Rulers of South China Sea Watch Maritime Dispute From Sidelines

China News is a collection of original and reposted news and articles about China, collected from the best sites around the web. It is also a place for writers about China to promote their own sites.
View all posts by China News »
« Top China diplomat to visit Vietnam in possible thaw over oil rig
China sends four oil rigs to South China Sea amid regional tensions »

8 thoughts on “The Cham: Vietnam’s descendants of ancient rulers of South China Sea”