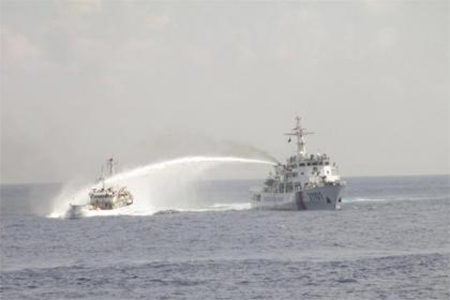 A Chinese ship (R) uses water cannon on a Vietnamese Sea Guard ship on the South China Sea near the Paracels islands, in this handout photo taken on May 5, 2014 and released by the Vietnamese Marine

The following is translated from Chinese media. The opinions expressed are those of the authors, and not necessarily those of China Daily Mail:

A Vietnamese fishery surveillance ship was surrounded by five Chinese official ships and attacked by water canon. A Chinese ship rammed the sides of the Vietnamese ship and damaged it.

Fortunately no one has been seriously injured.

According to Vietnamese authority, the ship’s carbon dioxide room and a life boat were destroyed.

Today, there are about 121 Chinese ships around the drilling rig including 44 law enforcement ships, 15 cargo ships, 9 tugboats, 38 fishing boats and 5 warships.

Contributor’s note: I have said in my previous post that due to recession, there is overcapacity in China’s shipbuilding industry. The Chinese government has ordered quite a few coast guard ships, the largest of which has a displacement of 10,000 tons. It has not only saved quite a few shipyards from bankruptcy but also enabled China to make preparations for confrontation with Vietnam and the Philippines.

According to Chinese media, Japan has promised to give Vietnam ten coast guard ships, but compared with China, its shipbuilding capacity and availability of funds are insignificant. Readers should be aware that China is well prepared for the confrontation and wants to provoke Vietnam to fire the first shot when Vietnam reaches the limit of its patience. Then China will have the excuse to annihilate the Vietnamese navy and take back from Vietnam the islands and reefs China claims as its territories.

Source: qianzhan.com “PLA suddenly hit hard at Vietnam, had a Vietnamese ship damaged by five Chinese ships: Vietnamese media” (summary by Chan Kai Yee based on the report in Chinese)

Author of the book "Tiananmen's Tremendous Achievements" about how with the help of Tiananmen Protests, talented scholars with moral integrity seized power in the Party and state and brought prosperity to China. The second edition of the book will be published within a few days to mark the 25th anniversary of Tiananmen Protests All the parts in the first edition remain in the second edition with a few changes due to information available later and better understanding. There are also some changes for improvements of style. The new parts are Chapters 12-19 on events in China after the first edition was published: The fierce power struggle for succession between reformists and conservatives; Xi Jinping winning all elders’ support during his mysterious disappearance for 2 weeks in early September, 2012; and Xi Jinping Cyclone. Chan Kai Yee's new book: SPACE ERA STRATEGY: The Way China Beats The US An eye-opening book that tells the truth how the US is losing to China. The US is losing as it adopts the outdated strategy of Air-Sea Battle while China adopts the space era strategy to pursue integrated space and air capabilities: It is losing due to its diplomacy that has given rise to Russian-Chinese alliance. US outdated strategy has enabled China to catch up and surpass the US in key weapons: Hypersonic weapons (HGV) that Pentagon regards as the weapon that will dominate the world in the future. Aerospaceplane in China’s development of space-air bomber that can engage enemy anywhere in the world within an hour and destroy an entire aircraft carrier battle group within minutes. Anti-satellite (ASAT) weapons, anti-ASAT weapons, stealth aircrafts, drones, AEW&C, etc. The book gives detailed descriptions of China’s weapon development based on information mainly from Chinese sources that the author monitors closely. U.S. Must Not Be Beaten by China! China is not a democracy. Its political system cannot prevent the emergence of a despotic leader or stop such a leader when he begins to bring disasters to people. A few decades ago, Mao Zedong, the worst tyrant in world history did emerge and bring disasters to Chinese people. He wanted to fight a nuclear war to replace capitalism with communism but could not bring nuclear holocaust to world people as China was too weak and poor at that time. If a despot like Mao Zedong emerges when China has surpassed the US in military strength, world people will suffer the misery experienced by Chinese people in Mao era. China surpassing the US in GDP is not something to worry about as China has the heavy burden to satisfy its huge population, but China surpassing the US in military strength will be world people’s greatest concern if China remains an autocracy. US people are of much better quality than Chinese people. What they lack is a wise leader to adopt the correct strategy and diplomacy and the creative ways to use its resources in developing its military capabilities. I hope that with the emergence of a great leader, the US can put an end to its decline and remain number one in the world. China, US, space era strategy, air-sea battle, space-air bomber, arms race, weapon development, chan kai yee
View all posts by chankaiyee2 »
« Japan and Philippines move to stengthen military ties in maritime disputes with China
Could this map of China start a war? »