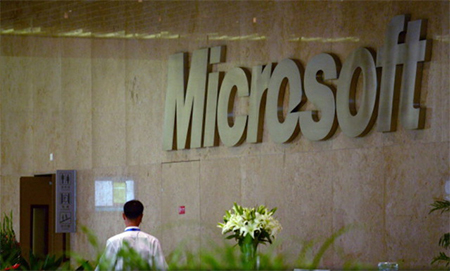 It’s hard to keep a straight face as China accuses Microsoft of “monopolistic behavior” and raids its offices in Beijing, Shanghai and elsewhere. What, that cartel known as the Communist Party suddenly has a problem with large organisations that dominate their particular sectors?

I have no inside intelligence on whether the tech giant Bill Gates built is as unscrupulous as China’s State Administration for Industry and Commerce claims (and, hey, I hate Windows as much as you do). But it’s quite a coincidence that this probe comes as so many U.S. tech companies suffer China Inc.’s wrath. While the crackdown predates Edward Snowden‘s disclosures about Washington’s surveillance programs, it has intensified in the months since the former intelligence consultant fled to Hong Kong and then Russia.

There’s no avoiding the perception that Beijing’s inquiries into the Microsofts and Qualcomms (GlaxoSmithKlines, too) of the world are arbitrary and politically motivated. China Inc. is creating a highly-organised environment of protectionism, unpredictable laws, unreliable suppliers and intimidation tactics that shield national champions from outside intrusion. Sure, China operates under the state-capitalism model, and its economy is a tool of government power. And yes, we’re aware of the evolving Cold War between Beijing and Washington. But the pattern of welcoming in foreign companies, forcing them into joint ventures, seeing what they’ve got and then discarding them by supposedly legal means can only be called one thing: a shakedown.

A similar perception problem afflicts President Xi Jinping‘s ongoing corruption purge. This week, that effort claimed the biggest scalp yet: former Politburo Standing Committee member Zhou Yongkang. In theory this should be good news for businesses, both foreign and domestic. By systematically taking down dirty Communist party leadership figures, Xi is in theory showing that no one, no matter how politically well-connected, will be allowed to undermine the system through rampant graft. By eliminating political enemies, Xi may also be clearing away resistance to structural reforms. Slowing the siphoning off of state wealth should mean that China’s 7.5 percent growth can be more widely shared.

Yet in both cases, the arbitrariness of the investigations and purges only creates uncertainty that could prove counterproductive for China’s economy. Already, names like L’Oreal SA, Revlon and generic drugmaker Actavis are either throttling back or leaving China. Will Beijing’s antics encourage household tech names to follow Google and pull the plug? Granted, China’s scale and vast potential makes navigating its idiosyncrasies a necessary evil. It’s not like Wal-Mart is about to leave. But businesses need clarity and predictability as much as they’d like to see a reduction in graft. Here’s how Actavis CEO Paul Bisaro puts it: “If we’re going to allocate capital, we’re going to do so where we can get the most amount of return for the least amount of risk. And China is just too risky.” The real loser here could China’s foreign investment flows.

Xi’s anti-graft effort could have other chilling effects. Local leaders may be reluctant to implement changes in the service of national reform, partly because of fears generated by Xi’s probes. They might decide it’s safer to keep pumping up growth than to court attention from central leaders in Beijing. Alternately, cadres may be too intimidated to take risks with new borrowing or growth-generating projects.

I’m not saying Xi shouldn’t eradicate corruption — he must. It’s the key to reining in state-owned enterprises and the shadow banking system, recalibrating the economy from exports to services, and avoiding a national debt crisis. But anyone who thinks cleaning up Beijing won’t have huge knockoff effects is dreaming.

The same is true of the dragnet now ensnaring Microsoft. Hey, perhaps Microsoft did run afoul of China’s monopoly laws. Heaven knows it’s had its share of anti-trust litigation these last 20 years. But if this is just China’s strategy, in the words of the official Xinhua news agency, to “build a more fair and equal market,” the Communist Party is looking in the wrong place. It should be looking in the mirror.

China News is a collection of original and reposted news and articles about China, collected from the best sites around the web. It is also a place for writers about China to promote their own sites.
View all posts by China News »
« China’s war games don’t bother Japan but disrupt civilian air traffic
Philippines to propose no action to raise tension with China in sea disputes »