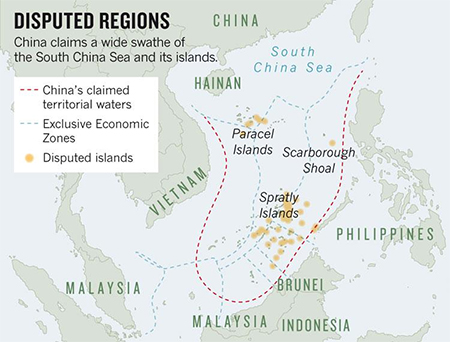 China’s top policy makers must have come to realise that China’s efforts to convince regional states that it has a firm claim to “historic rights” and “indisputable sovereignty” over the South China Sea has been less than successful.

Since China has already settled many of its land border disputes with its neighbours, including Vietnam, the question arises why has China been so unsuccessful in resolving maritime territorial disputes with Southeast Asian states? Why have these disputes resulted in confrontation leading to rising tensions?

This article offers ten modest proposals that if implemented would result in a sea change in regional attitudes towards China. China would benefit by upholding international law.

First, China should accept that all regional states genuinely welcome China peaceful rise. No state wants to confront China or even to contain it. Many states, like China, experienced colonialist intervention in their affairs. Therefore China should revisit the Five Principles of Peaceful Co-existence and sincerely apply these principles in its diplomatic relations with regional states. It is important that China and small states treat each other with mutual respect for sovereignty and territorial integrity, mutual non-aggression, non- interference in each other’s internal affairs, equality and mutual benefit, and peaceful coexistence.

Second, China should reaffirm its adherence to international law and the Nations Convention on the Law of the Sea (UNCLOS). China should ensure that all its domestic legislation is in accord with international law. This will provide a strong legal and normative basis for Chinese diplomacy.

Third, China should clarify its claims to “historic rights” and “indisputable sovereignty” with great precision. Up until now Chinese spokesmen have stated repeatedly that China has sufficient evidence to support these claims. Yet China has not been forthcoming in providing details. The most egregious example is China’s u-shaped nine-dash line to mark claims in the South China Sea. International legal specialists are in agreement that this map constitutes a “piece of information” only and is not an authoritative documentation of sovereignty claims.

Fourth, China should draw up a White Paper outlining the basis of its claims to “historic rights” and “indisputable sovereignty.” Chinese officials sometimes mention “other international law.” The use of maps dating back to the Yuan Dynasty do not provide the evidence required by modern international law. For example, China’s claims to sovereignty over land features in the South China Sea must be documented by evidence of when these land features were occupied and details of how they were administered.

Fifth, sovereignty disputes over territory or land features in the South China Sea can only be solved by direct negotiation between the states concerned. Many Southeast Asian diplomats consulted by this writer state that China has set a pre-condition on bilateral negotiation, namely that they must recognise Chinese sovereignty claims first. Then and only then can they discuss mutual cooperation and joint development. China should drop this pre-condition.

Sixth, China should put aside its sovereignty claims and deal with the status quo by respecting international law. This means accepting that there are legitimate maritime zones in dispute between China and regional states. China and other states should refrain from unilateral “sovereignty enforcement” activities.

Seventh, the important injunction by international law is that the states in dispute should enter into provisional arrangements until their dispute is settled, not alter the status quo, and refrain from the threat or use of force. China and other states – without prejudice to their sovereignty claims – should work out the temporary demarcation of maritime zones. If the parties agree they can enter into agreements for fisheries management, joint development of oil and gas resources and search and rescue.

Ninth, while China is acting within its rights in deciding not to participate in the Arbitral Tribunal instigated by the Philippines, China should stop criticising this process. China’s actions are widely viewed as undermining international law. The Philippines is not directly challenging Chinese sovereignty or the exemptions China announced when it acceded to UNCLOS. China uses UNCLOS as the basis for its baselines, territorial waters, contiguous zone, exclusive economic zone and continental shelf. All the Philippines is doing, in light of China’s unilateral assertion of sovereignty, is to ask the Arbitral Tribunal to determine if it has the same entitlements under UNCLOS.

If China were to uphold and follow international law, this would assist in transforming territorial and maritime disputes from physical confrontation between China and regional states into a legal confrontation. If China and regional states accept the decisions of an independent arbitrator this will contribute greatly to the goal of making Southeast Asia into a zone of peace, cooperation and development. This is a win-win situation not only form China but the small states themselves.

General Manager at Craig Hill Training Services * Get an Australian diploma by studying in your own country * Get an Australian diploma using your overseas study and work experience * Diplomas can be used for work or study in Australia and other countries. * For more information go to www.craighill.net
View all posts by Craig Hill »
« Philippines to propose no action to raise tension with China in sea disputes
Prelude to Conflict: Asia, August 4 »