Chinese jet’s aggressive intercept of US jet in international waters 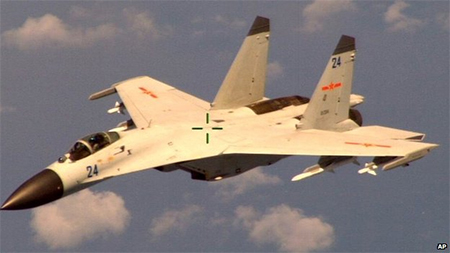 A Chinese fighter came perilously close to a US military patrol plane over international waters east of China’s Hainan Island, the Pentagon has said.

Spokesman John Kirby said that the US had protested to the Chinese military over the mid-air intercept, calling the fighter pilot’s actions “unsafe and unprofessional”.

He said that the Chinese aircraft came within 10 metres of the US Navy plane.

Correspondents say that it is the fourth such incident since March.

So far there has been no comment about the reported near-miss from China.

Rear Admiral Kirby said that the incident happened on Tuesday when an armed Chinese Su-27 fighter intercepted a US Navy P-8 Poseidon patrol aircraft that was on a routine mission.

“We have registered our strong concerns to the Chinese about the unsafe and unprofessional intercept, which posed a risk to the safety and the well-being of the air crew, and was inconsistent with customary international law,” he said.

He said that the Chinese manoeuvre detracted from efforts to improve American relations with China’s military.

The warplane flew close to the surveillance aircraft three times, he said, flying above, underneath and alongside it. At one point it performed “a barrel roll” in an apparent display of its weapons.

Near-misses between aircraft and naval vessels of the US and China are commonplace off the coast of China.

In December China said one of its warships “encountered” a US guided missile cruiser, confirming US reports of a near-collision in the South China Sea.

Shortly before this incident China set up an Air Defence Identification Zone (ADIZ) in the East China Sea, and said that aircraft flying through the zone must follow its rules, including filing flight plans.

The US, Japan and South Korea have rejected China’s zone, and flown undeclared military aircraft through it. The US has called the move a unilateral attempt to change the status quo in the region.

The most serious incident in recent years however took place in 2001, when a Chinese fighter jet collided with a US Navy EP-3 spy plane, killing the Chinese pilot.

General Manager at Craig Hill Training Services * Get an Australian diploma by studying in your own country * Get an Australian diploma using your overseas study and work experience * Diplomas can be used for work or study in Australia and other countries. * For more information go to www.craighill.net
View all posts by Craig Hill »
« China intensifies aggression against Philippines fishermen in retaliation for jailing of Chinese fishermen
China rejects Philippines protest on ships, complains of detentions »