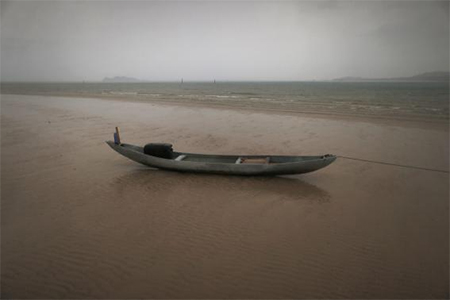 A fishing boat sits on a beach during a rain storm on the east coast of Natuna Besar July 7, 2014

While China and ASEAN decided at a conference of economic and trade ministers on August 26 to conduct discussions on upgrading China-ASEAN free trade area, Reuters gave a report on the same day about the fear that China’s rise has roused in ASEAN countries Indonesia and Malaysia.

While providing ASEAN countries with much economic gain, China’s rise has also scared some people there especially due to the tensions China has with Vietnam and the Philippines.

What is especially worrisome is the fear remains in spite of the fact that China does not claim the islands and waters that Indonesia regards as its own.

Reuters says in the report, “Jakarta’s foreign ministry insists there is no problem with China over the status of Natuna, but the Indonesian military has in recent months struck a more assertive tone.

“In April, Indonesian armed forces chief Moeldoko accused China of including parts of Natuna within its so-called “Nine-Dash Line,” the vague boundary used on Chinese maps to lay claim to about 90 percent of the South China Sea.”

Malaysia has been on good terms with China for a long time as proved by its prime minister’s recent Beijing visit. Still it is stepping up its military buildup related to disputed islands and waters.

All the above proves that China has to take real actions to prove that it is sincere in pursuing a peaceful rise. The best it can do is to ease the tension between itself and Japan and Vietnam.

The following is the full text of Reuters report on the topic:

The word “sleepy” could have been invented for Ranai, the largest town in Indonesia’s remote and sparsely populated Natuna archipelago.

It has few cars and only two sets of traffic lights. The cloud-wreathed mountain looming over it resembles a slumbering volcano. Nearby beaches lie pristine and empty, waiting for tourists.

From Ranai, it takes an imaginative leap to see Natuna – a scattering of 157 mostly uninhabited islands off the northwest coast of Borneo – as a future flashpoint in the escalating dispute over ownership of the South China Sea, one of the world’s busiest waterways.

But that’s precisely what many people here fear.

They know Natuna is quite a prize. Its fish-rich waters are routinely plundered by foreign trawlers. Lying just inside its 200-nautical-mile exclusive economic zone is the East Natuna gas field, one of the world’s largest untapped reserves.

And any quarrel over Natuna would also upset a delicate strategic balance, undermining Indonesia’s role as a self-appointed honest broker in the myriad territorial disputes between its Southeast Asian neighbors and regional giant China.

Jakarta’s foreign ministry insists there is no problem with China over the status of Natuna, but the Indonesian military has in recent months struck a more assertive tone.

In April, Indonesian armed forces chief Moeldoko accused China of including parts of Natuna within its so-called “Nine-Dash Line,” the vague boundary used on Chinese maps to lay claim to about 90 percent of the South China Sea.

With maritime tensions rising between China and the Philippines and Vietnam, Moeldoko later vowed to send more troops to Natuna “to anticipate any instability in the South China Sea and serve as an early warning system for Indonesia”.

Officially, China and Indonesia don’t contest the sovereignty of the islands: both agree they are part of Indonesia’s Riau Province. Nor is Indonesia among the five countries – Malaysia, the Philippines, Vietnam, Taiwan and Brunei – challenging Beijing’s expansive claims in the South China Sea.

This has allowed Jakarta to play a neutral role and seek to mediate in an increasingly bitter and volatile dispute.

But Natuna’s bit-part in this regional drama reflects “growing concern within Indonesia about China’s actions within the Nine-Dash Line,” said Ian Storey, a security expert at the Institute of Southeast Asia Studies (ISEAS) in Singapore.

Rising maritime tensions with China have induced many Southeast Asian countries to seek closer strategic ties with the United States.

Since 2010 Indonesia has unsuccessfully sought clarification through the United Nations of the legal basis for the Nine-Dash Line. Indonesia’s foreign minister, Marty Natalegawa, told Reuters in April that Indonesia had “inferred” from China that the line did not cross Indonesian territory.

Locals remain unconvinced. “We’re worried they’ll take over this territory,” Ilyas Sabli, Natuna’s regent, or district chief, told Reuters, referring to the Chinese. “That’s why it has become our first priority to protect this homeland.”

About 80,000 people live on 27 of Natuna’s islands, mostly in Ranai and other places on the main island of Natuna Besar.

Ranai airbase was developed after Indonesia’s independence in 1949, and the town grew up around it. Today, a new civilian passenger terminal is being constructed in the hope of attracting more investors and tourists.

There was no evidence of an Indonesian military build-up. Two small naval ships lay idle at the end of a nearby pier.

Plans to upgrade the airbase were “not a new thing”, but part of a longer-term strategy to improve the airforce’s far-flung facilities, base commander Lieutenant Colonel Andri Gandhy told Reuters.

The plans include lengthening Ranai’s runway to handle larger aircraft. Work will start in 2015 or 2016, depending on the funding, said Gandhy.

Any military build-up would be hampered by budget restraints and fear of antagonizing China, said Yohanes Sulaiman, a security analyst at the Indonesian National Defense University.

“The Indonesian military really wants to defend the islands, but with what? How can they fight China?” he said.

Neighboring Malaysia has a more convincing blueprint to beef up its military presence in the South China Sea.

In October, Malaysia announced plans to build a navy base in Bintulu on Sarawak, the closest major town to the James Shoal, a submerged reef about 80 km (50 miles) off the coast of Malaysia’s Sarawak claimed by Malaysia, China and Taiwan. Chinese warships conducted exercises nearby in 2013 and 2014.

The base will host a new Marine Corps, modeled on, and possibly trained by, its U.S. counterpart. Without mentioning China, Malaysia’s defense minister said the aim was to protect Malaysia’s oil and gas reserves.

As in Vietnam and the Philippines, it is Indonesia’s fishing fleet that feels China’s growing maritime presence most acutely.

Natuna fish stocks plummeted with the arrival of big-net trawlers from China, Vietnam, Thailand and Taiwan, said Rusli Suhardi, 40, a leader of the local fishermen’s cooperative.

A nearby bay is littered with the disintegrating wrecks of a dozen or more boats, mostly Vietnamese trawlers confiscated by the Indonesian authorities for fishing illegally. That no Chinese trawlers rot in this marine graveyard is testament to China’s growing maritime muscle.

In March 2013, armed Chinese vessels confronted a patrol boat from Indonesia’s maritime and fisheries ministry and demanded the release of Chinese fishermen who had just been apprehended in Natuna waters. Fearing for his safety, the captain of the Indonesian boat complied.

Storey, of ISEAS, said Indonesia has downplayed such incidents, not wanting them to overshadow relations with China.

Those relations are historic. Predating Ranai’s airbase is the ethnic Chinese community of Penagi, a ramshackle village built on stilts along a nearby pier. One of its oldest residents is Lim Po Eng, 78, a retired laborer, who said Penagi was founded by his grandfather and others fleeing chaos and poverty in China.

“We settled here and began to develop the place,” he said. The island was already inhabited by indigenous people, added Lim, “but they lived in the bush.”

Every morning, an Indonesian flag is raised over Penagi’s pier. Many locals say the Indonesian government cares little about the fate of Natuna, which lies closer to Malaysia’s capital Kuala Lumpur than it does to Jakarta.

But this apparent indifference is bred partly by a desire to keep the status quo, said security analyst Sulaiman.

“The government knows there are no good options,” he said. “They can’t fight China, but if they don’t push their claims Indonesia will become a laughing stock.”

Author of the book "Tiananmen's Tremendous Achievements" about how with the help of Tiananmen Protests, talented scholars with moral integrity seized power in the Party and state and brought prosperity to China. The second edition of the book will be published within a few days to mark the 25th anniversary of Tiananmen Protests All the parts in the first edition remain in the second edition with a few changes due to information available later and better understanding. There are also some changes for improvements of style. The new parts are Chapters 12-19 on events in China after the first edition was published: The fierce power struggle for succession between reformists and conservatives; Xi Jinping winning all elders’ support during his mysterious disappearance for 2 weeks in early September, 2012; and Xi Jinping Cyclone. Chan Kai Yee's new book: SPACE ERA STRATEGY: The Way China Beats The US An eye-opening book that tells the truth how the US is losing to China. The US is losing as it adopts the outdated strategy of Air-Sea Battle while China adopts the space era strategy to pursue integrated space and air capabilities: It is losing due to its diplomacy that has given rise to Russian-Chinese alliance. US outdated strategy has enabled China to catch up and surpass the US in key weapons: Hypersonic weapons (HGV) that Pentagon regards as the weapon that will dominate the world in the future. Aerospaceplane in China’s development of space-air bomber that can engage enemy anywhere in the world within an hour and destroy an entire aircraft carrier battle group within minutes. Anti-satellite (ASAT) weapons, anti-ASAT weapons, stealth aircrafts, drones, AEW&C, etc. The book gives detailed descriptions of China’s weapon development based on information mainly from Chinese sources that the author monitors closely. U.S. Must Not Be Beaten by China! China is not a democracy. Its political system cannot prevent the emergence of a despotic leader or stop such a leader when he begins to bring disasters to people. A few decades ago, Mao Zedong, the worst tyrant in world history did emerge and bring disasters to Chinese people. He wanted to fight a nuclear war to replace capitalism with communism but could not bring nuclear holocaust to world people as China was too weak and poor at that time. If a despot like Mao Zedong emerges when China has surpassed the US in military strength, world people will suffer the misery experienced by Chinese people in Mao era. China surpassing the US in GDP is not something to worry about as China has the heavy burden to satisfy its huge population, but China surpassing the US in military strength will be world people’s greatest concern if China remains an autocracy. US people are of much better quality than Chinese people. What they lack is a wise leader to adopt the correct strategy and diplomacy and the creative ways to use its resources in developing its military capabilities. I hope that with the emergence of a great leader, the US can put an end to its decline and remain number one in the world. China, US, space era strategy, air-sea battle, space-air bomber, arms race, weapon development, chan kai yee
View all posts by chankaiyee2 »
« China planes ‘violated Taiwanese airspace’
What was the US P-8 spy plane doing off China’s Hainan Island? »