Japan and India pledge to strengthen ties as China rises 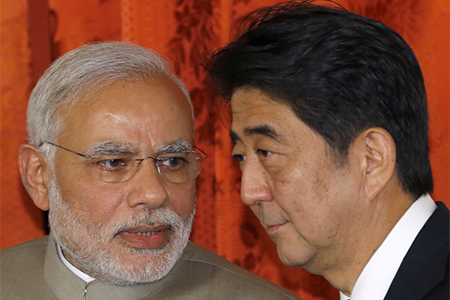 Prime Minister Shinzo Abe pledged an upgrade of economic and security ties with India, saying Japan would double investment and expand defense cooperation amid concerns about China’s growing influence in the region.

Abe and his Indian counterpart Narendra Modi at a summit meeting in Tokyo yesterday agreed to elevate ties to a special strategic and global partnership. Abe offered 50 billion yen ($480 million) in infrastructure loans and pledged 3.5 trillion yen of public and private investment and financing in India in five years.

“I often say that Japan-India relations have more potential than any other ties in the world,” Abe said. “This time, hand in hand with Prime Minister Modi, I want to boost ties in every possible field and elevate this to a special strategic and global partnership.”

The declaration comes three months after Modi took office pledging to take a tougher stance with neighbors China and Pakistan on border disputes, and hours after Japan said three Chinese coast guard vessels entered waters near disputed islands. Japan is courting India as it seeks to counter China and deter the use of force in disputes over contested territory.

The two leaders are known to have a close relationship, and Abe made the unusual gesture of traveling to the ancient capital of Kyoto at the weekend to host an informal dinner for Modi. Abe also accepted an invitation to visit India for a summit in 2015. Modi, 63, brought a delegation of executives with him on the four-day trip. He was set to meet Emperor Akihito and deliver a speech today, before leaving Tokyo tomorrow.

China remains India’s largest trading partner, accounting for about 9 percent of the country’s total commerce, more than four times that of Japan, according to Indian Commerce Ministry data. Japan is the fourth-largest foreign direct investor in India, while China is not in the top 10, the data show.

“We are determined to increase our economic cooperation and the magnitude to which Japan is offering financial support signals a strong bond between our two countries,” Modi said after the meeting. “The success of the 21st century will largely depend on the path our two nations follow.”

Japan and India agreed to speed up talks on the transfer of US-2 amphibian rescue aircraft to India and on the signing of an agreement on civil nuclear power. They consented to look into ways to cooperate on defense technology.

The two leaders also affirmed their commitment to maritime security, freedom of navigation and the peaceful settlement of disputes under international law, a veiled dig at China, which is involved in disputes with at least half a dozen Asian nations over territory in the East and South China Seas and in the case of India, on land.

Modi earlier criticised the expansionist policies of some countries during a speech to business leaders in Tokyo.

“The world is divided in two camps. One camp believes in expansionist policies while the other believes in development,” Modi told a gathering of business leaders in Tokyo. “We have to decide whether the world should get caught in the grip of expansionist policies or we should lead it on the path of development and create opportunities that take it to greater heights.”

Japan and China have been embroiled in a dispute over a group of uninhabited islands in the East China Sea, while India accuses China of occupying 38,000 square kilometres (about 15,000 square miles) of its territory.

“The increasing intimacy between Tokyo and New Delhi will bring at most psychological comfort to the two countries,” China’s Global Times said today in an editorial. “If Japan attempts to form a united front centered on India, it will be a crazy fantasy generated by Tokyo’s anxiety of facing a rising Beijing.”

China News is a collection of original and reposted news and articles about China, collected from the best sites around the web. It is also a place for writers about China to promote their own sites.
View all posts by China News »
« Hong Kong braces for protests as China rules out full democracy
How to buy Chan Kai Yee’s new book ‘Space Era Strategy – The Way China Beats The U.S.’ »